While a peppy voiceover runs through the all-too conventional tropes of commercial scripts (“I can’t believe we turned up wearing the same thing,” “Strong, healthy hair…what’s my secret?”), the women onscreen are busy diffusing crisis situations, flying planes, and generally using their brains and brawn in equal measure. The juxtaposition of the incongruous sound and visual is both hilarious and powerful, highlighting the extent to which women are painted into one-dimensional expressions of femininity. Sara and her team – which included women in key crew roles, like DOP Nanu Segal – provide an authentic look at some expressions of womanhood that are often neglected in advertising.

We spoke with Sara, who is also our ambassador for Free The Bid England, about the pleasure of working with an agency and client who were ready to step up and call out cliches, geeking out while getting up close and personal with a fighter jet, and her desire to see women directors given the chance to shoot top-level sports advertisements (something with Lionel Messi or Anthony Joshua, perhaps?) 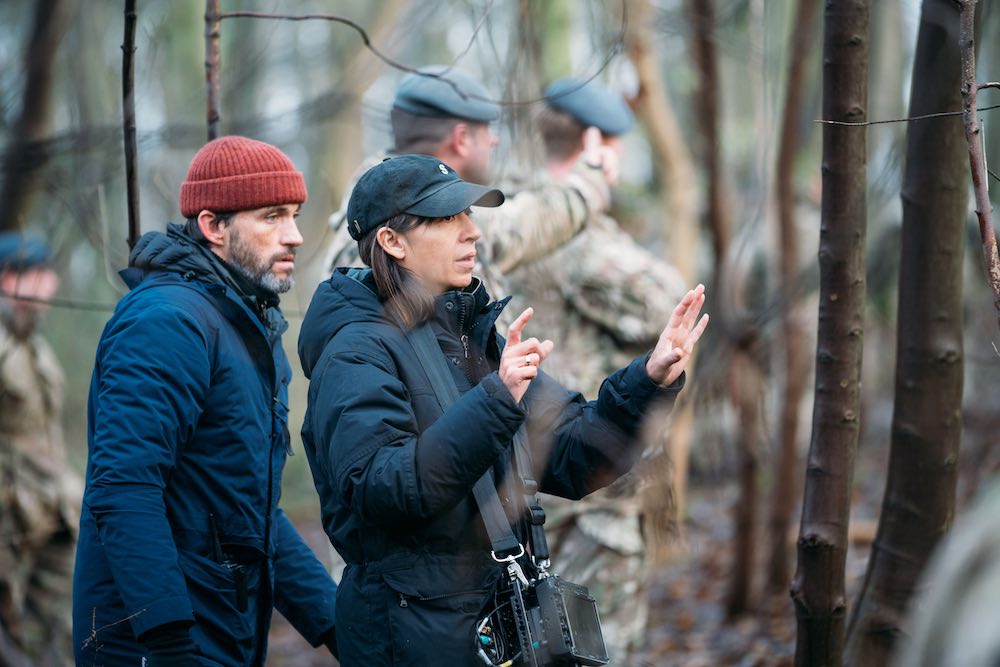 Your ad for the RAF makes use of voiceovers that imitate cliched attempts at marketing to women. What made the initial brief speak to you?

The fact that an agency and client were up for calling out the cliches spoke to me –  I loved the idea of showing real women working at the RAF with VOs that represent how we are normally spoken to in advertising. I knew this unique juxtaposition could create a powerful message.

For you as a director, did this campaign represent a refreshing change from the way that women are often represented in advertisements?

I’m still amazed at how many ads I see that still patronize and reduce women to basic stereotypes.

I knew this idea would bring into sharp focus how we (women) are more than the boring cliches we’ve been fed for years, and that lots of us are more interested in what we are capable of achieving rather than how we look. 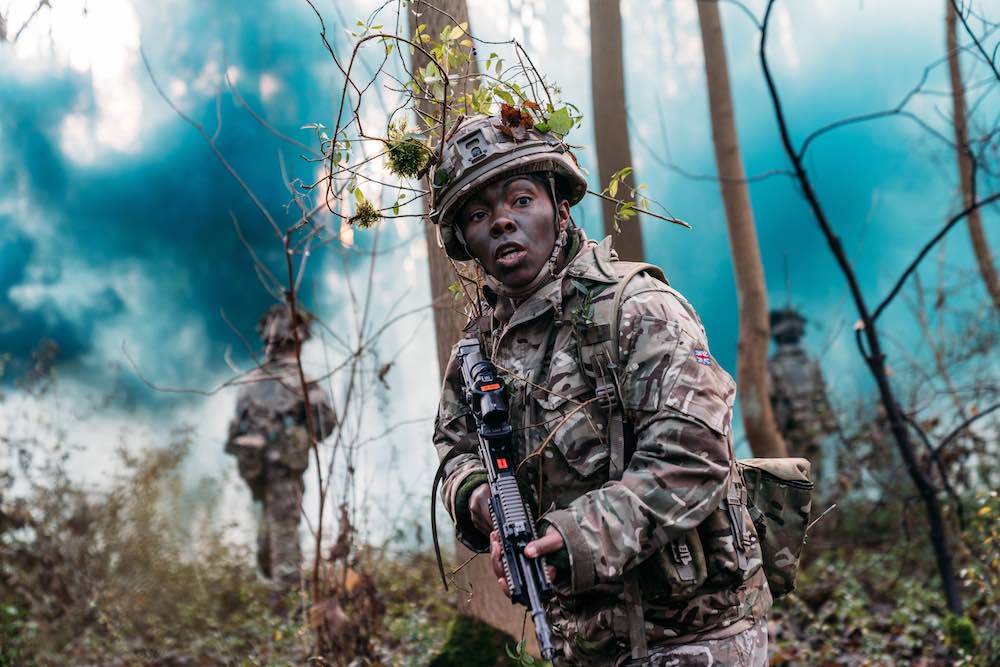 How did you and the agency work together to bring the idea to life?

The agency came with the script – and they had already nailed it, to be honest.  Authenticity is always important to me, but even more than usual here, so I worked really closely with the creatives to get this just right.  We met lots of inspiring RAF servicewomen as we scouted various RAF bases together, and then tweaked the script and visuals as various practical constraints came into play. Once we had the footage, the painful part of the process was researching all of the cliched female-oriented ads out there, so we could recreate them as believably as possible. We had to think about the perfect music, sound effects and casting voice overs that are often used in this genre of advertising.  It was a strange process, as we were in effect recreating the kinds of cliched ads that I dislike so much. 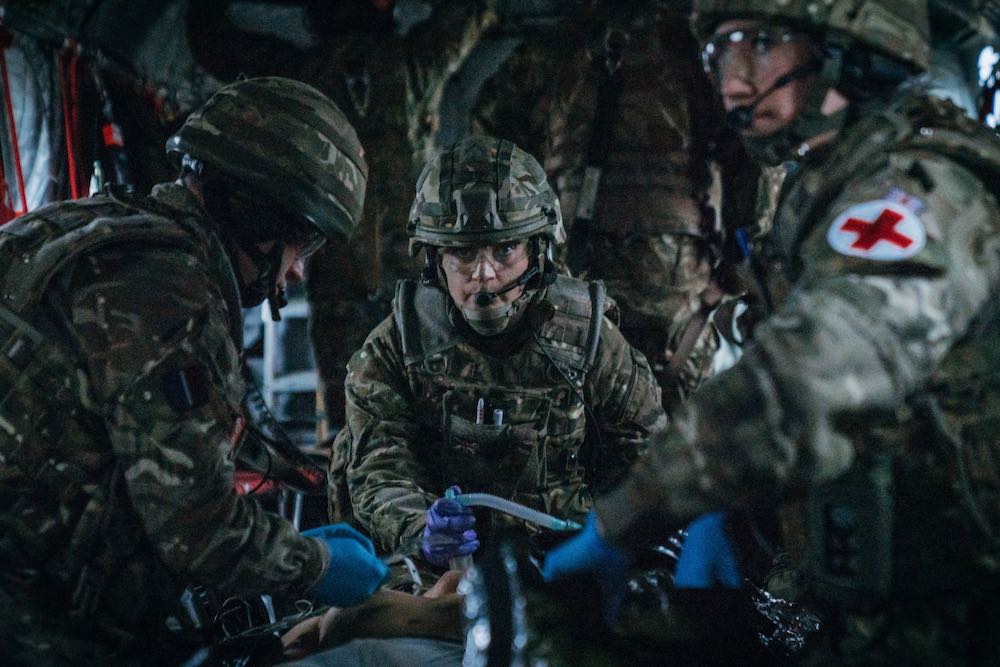 Tell us about the shoot itself – what were some of biggest challenges that this shoot posed?

Shooting on working RAF bases was a challenge. Obviously the RAF have so many important jobs to do other than assisting us in making a film! However, they were really helpful and we all worked together to bring the film to life in the most authentic way possible.  Time constraints were probably our biggest challenge – for instance, how long and when would we get the aircraft we needed? There were also some weather issues: we experienced incredibly high winds and poor visibility on one of the filming days in the Chinook, which made the complicated maneuvers we wanted even harder to achieve. 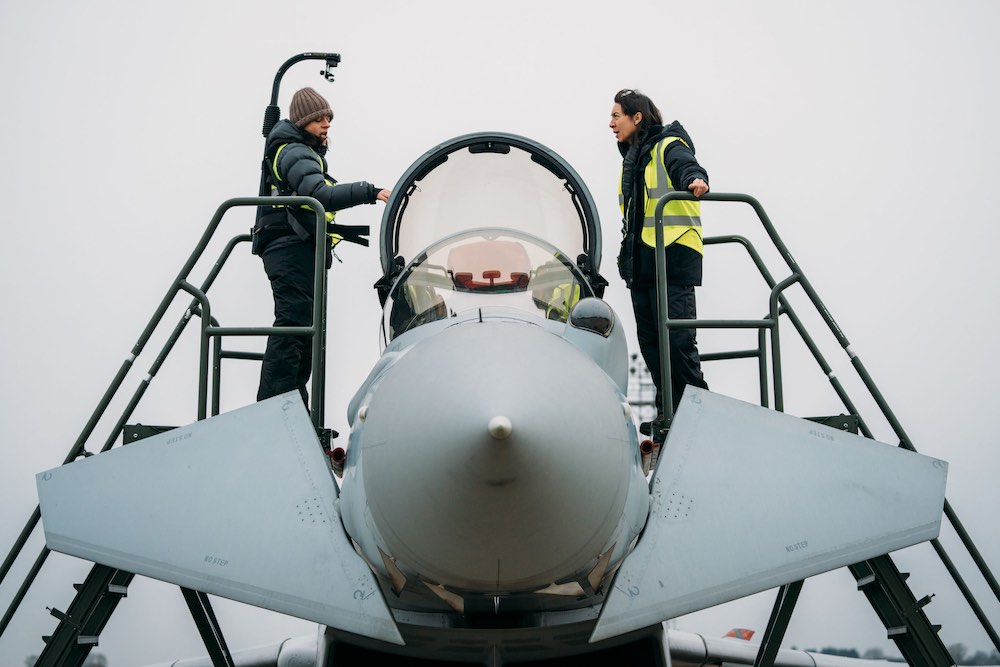 Did this project allow you to explore any aspects of film craft that were particularly exciting, either technically or otherwise?

Apart from the positive message, I was just as excited about the chance to shoot in a twin-engine, tandem rotor Chinook helicopter, and to get to be up close and personal with a Typhoon fighter jet and its incredible pilot. This kind of experience is thrilling stuff for the adrenaline junkie/geek in me – a window into a world I would never normally experience.

Technically, I wanted the scenes to feel as real as possible. It was important for nothing to seem manipulated, because that would conflict with the message of showing real women who are defined by their actions, not cliches. Sometimes the simplest techniques are the best. 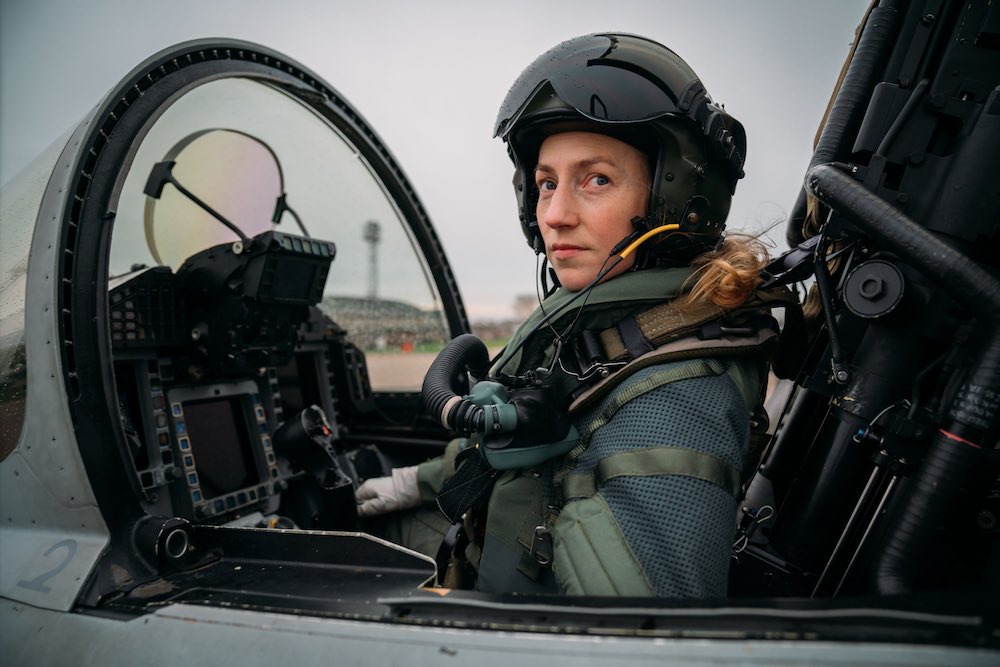 What kind of direction did you give to your cast, in order to achieve the performances you were looking for?

All the cast were real RAF personnel; all incredibly genuine and dedicated servicewomen. I didn’t do much really – all I wanted was to depict them authentically and for them to feel at ease, unfazed by the camera or the crew, so they could just be themselves.

Did this ad draw upon any aspects of your own personal experience, and how did you bring them into the final piece?

The process reminded me of how I got started as a commercial director; most of the scripts I was first sent were female beauty products…shampoos, face creams, leg wax, etc. I am eternally grateful for the opportunity this work gave me to start shooting commercials at a very young age, but I eventually started to feel constrained in this area. I wanted to help brands tell stories beyond how shiny our hair or young our skin looked. This was a long time ago, and I was reminded suddenly again of that period of my career when funnily enough my experience ended up helping us create a pastiche of this style of ads. 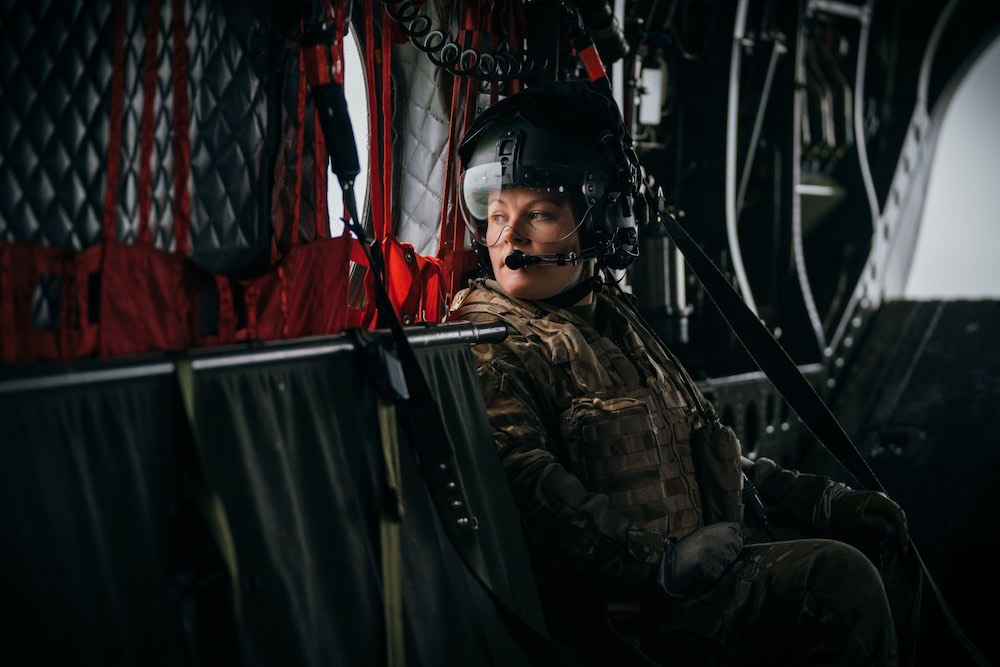 We spoke to you in 2017 about your Holiday work with pledged brand HP in association with BBDO. Since we last spoke, you’ve been appointed as our Free The Bid ambassador for England! Have you observed changes to the industry due to Free The Bid’s efforts?

I know the untiring work of Free the Bid breaks down gender doors every day with brands and agencies. They’ve been so instrumental in putting a spotlight on the lack of female directors shooting and being signed to production companies all over the world – I’ve noticed the spotlight slowly widening each year, and long may this continue. It’s definitely getting better, but we still have so much more work to do.

What progress still needs to be made?

It’s the Woman’s World Cup this year and I am hoping that most advertisers involved will be using female directors. Of course they should, it might seem like a no-brainer, but a few years ago these ads would have all been directed by men. I’m still waiting to see a female director shoot one of the top men’s football/sport commercials, however…hopefully it won’t be long. 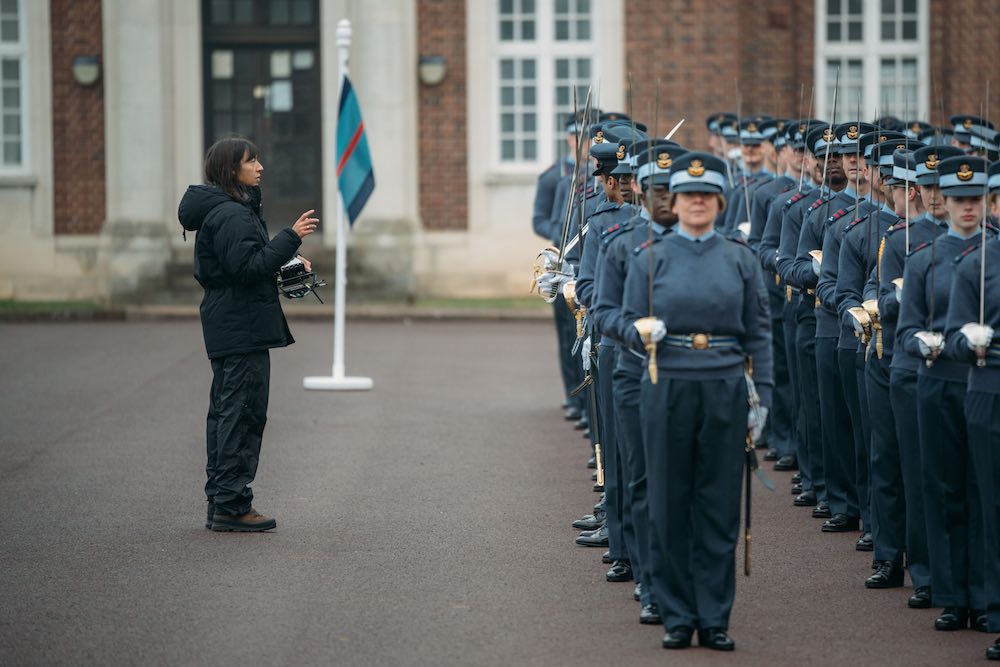 Finally, what are your goals, both for the initiative’s expansion in the UK and for your own work?

To keep finding, encouraging and supporting female talent: not only directors, but in other areas of film that are traditionally dominated by men. My RAF commercial had a female Producer, DOP and Production Designer – it wasn’t hard to find incredible talent in these areas. I’m also going to keep looking out for future directorial talent, using my experience to help support them and then to help them overcome the challenges of getting their work seen in a crowded market.

In terms of my own work, I want to continue to direct work that challenges me and that I’m proud of. You never know, maybe they’ll let me shoot Lionel Messi or Anthony Joshua one day soon… 😉 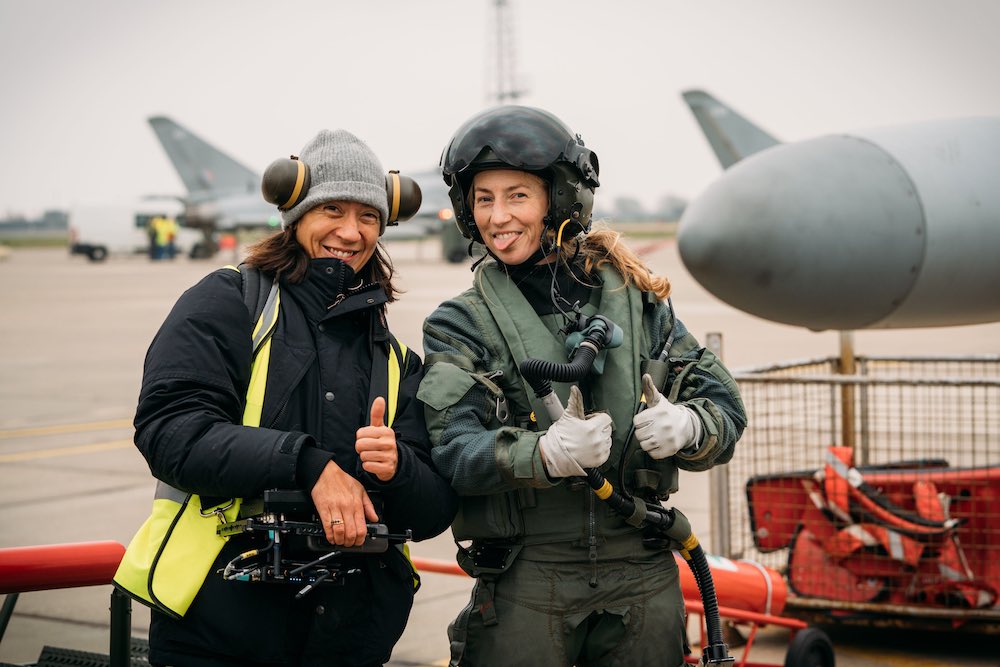