“Women have a unique hyperawareness of their physical selves as objects,” she explains in the article accompanying the film’s NOWNESS premiere. “We’re constantly on display—sometimes we feel like prey.”

We spoke with Samantha about finding the perfect actress to inhabit the multi-faceted lead role, exploring the intimate anonymity of camming, and horror’s potential, as a genre, to reveal societal truths.

“Blue” premiered on NOWNESS – can you tell us about the road to getting this film funded and showcased on an online platform?

I funded it myself, aside from a few favors and a Kickstarter that covered part of post-production. This is the first thing I’ve directed, and I wanted to make something I could have full control over and learn from. I’m so happy all of the people involved were down to be part of this and let me be annoying while I figured out what I was doing. So many elements have to align to achieve the vision you go into a project with, and it’s been really cool to see it come to fruition after working with such talented people on each individual piece.

The film is an uneasy story that takes place within the world of camming. What initially made you want to delve into this topic, within the format of a short? What ideas were you hoping to explore?

The first time I watched a cam girl, I knew I wanted to make something about it, because of what it can say about the male gaze. Women are on display, putting on a performance to please their audience; nothing is expected of men but to watch and consume. Beyond that, in an abstract way, camming conveys a type of connection that’s become ubiquitous.

It reminds me of the scene in Paris, Texas when Harry Dean Stanton is talking to Nastassja Kinski behind one-way glass in the peep show booth. It’s intimate but anonymous. These girls share a lot with the strangers that are watching them and know private details about their viewers’ lives. They’re connecting but they’re isolated, hiding behind screens and usernames. I think camming is symbolic of a cultural moment that we’re in right now, because we’re providing windows to our private worlds and watching each other live our lives. We’re all performing for an unseen audience.

How did you cast your lead – what qualities were you looking for?

I wanted someone who would be completely at home in the role of being watched. Veronika’s perfect because she’s very comfortable in herself and it really comes through. She was super down with everything every step of the way. I loved working with her. She also looks like two different people in the two versions of the character and having a distinct separation between the girl and her persona was important visually.

What kind of direction did you give your actors in terms of performance?

Veronika was easy to direct. She got it. Most of the time I found myself telling the voice actors to do less – I didn’t want a performance. I wanted them to sound natural and go off script, stumble over their words, be a little nervous. Those parts had to be as believable as possible, and really feel like they were meant to be private conversations.

The film has a distinctive look – what were some of your visual reference points? Talk us through some of  the choices that were made, in terms of production design and lighting.

I wanted it to feel voyeuristic and claustrophobic. One visual reference was Wong Kar-Wai, because his shots are a lot of frames within frames, which works well to create that feeling. The TVs are meant to emphasize the voyeuristic aspect and show that the person being watched is also watching others. Screens were a big visual element. The title “Blue” is part of that. It’s inspired by Daniel Clowes, who I love. The only color he uses in Ghost World is this eerie blue that’s meant to be the glow of TV screens that washes over everything.

The sound design and score set the mood and really help to keep viewers on edge. Can you tell us about your thought process behind the sound?

I love horror scores. I listened to so many while I was piecing the film together. With horror especially, you have to consider the score early on, because sound has such a big impact on what the audience feels. The strings were the most fun part to work on. We had a violinist come in, Ben Russell, and recorded him playing as he watched the cut for the first time. We did a bunch of different takes and layered them over each other and created the intense build. It’s so cool when you’re finally able to combine the image with the sound and it clicks and really makes you feel something.

How large of a crew did you work with to realize your vision for this film? Were there any particular highlights of the shoot?

It was a small crew. I’d never directed before, aside from a couple little experiments with friends, so everything was a highlight. Greta’s amazing. She’s so precise and detail-oriented when she sets up shots.

One chaotic highlight is that our location dropped out the night before we planned to start shooting. It’s an old house in Carroll Gardens that’s been in the person’s family since the late 1800s and they changed their mind at the last minute. For some reason, the family ended up letting us go ahead with it, on the one condition that we bring them a specific brand of whiskey. 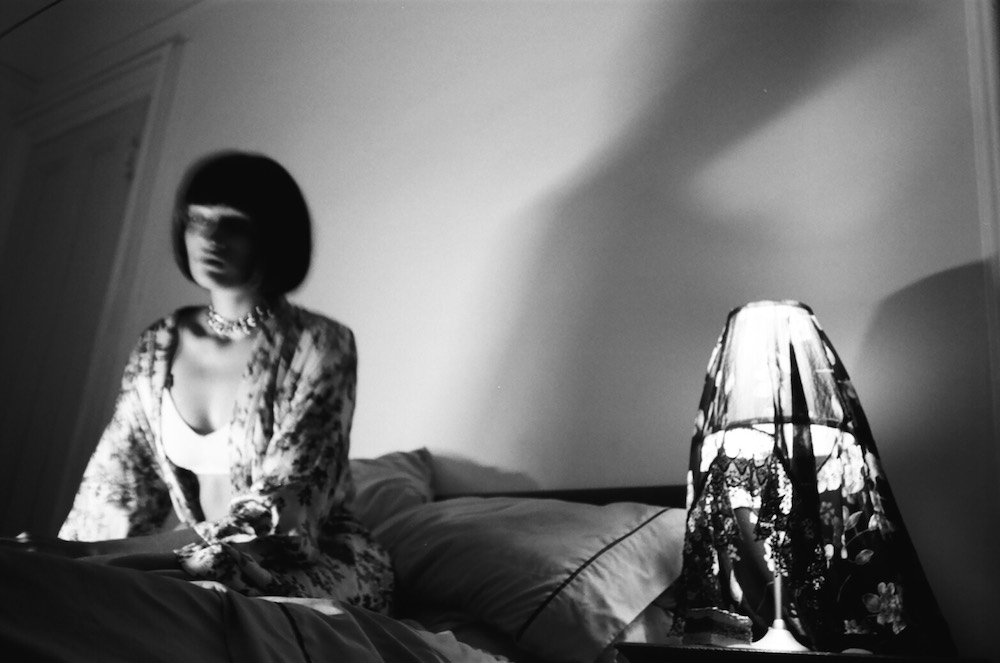 The main character in your film moves between reality and dreamspace in a fluid way – what were your thoughts on how to convey this slippage between consciousness and unconsciousness, reality and fantasy?

I wanted to mix reality and dreams and fantasy. I like art that doesn’t separate those things, but considers them all part of the same experience. I wanted to give physical space to the imagined. I live in my head a lot and what I imagine has always felt very real to me. That’s why I love David Lynch so much: he creates a fractured reality that feels true to the audience.

What were you hoping to say about the nature of the gaze, especially from a female perspective, in this film?

It’s something I’ve struggled with since I was young, as I know most women have. You’re aware of your physical self as an object so early in your life. You’re constantly being seen, and you perform an idea you have of what you should look like and act like. If men like it, you’re stared at, yelled at, followed, attacked. You feel like prey. I wanted to create the feeling of men consuming her in both private and public space, and show that that attention can be both exciting and terrifying. When she’s safe behind a camera and a computer screen, she has control and she enjoys being on display in that way. Outside of that, that consumption feels dangerous because it is. 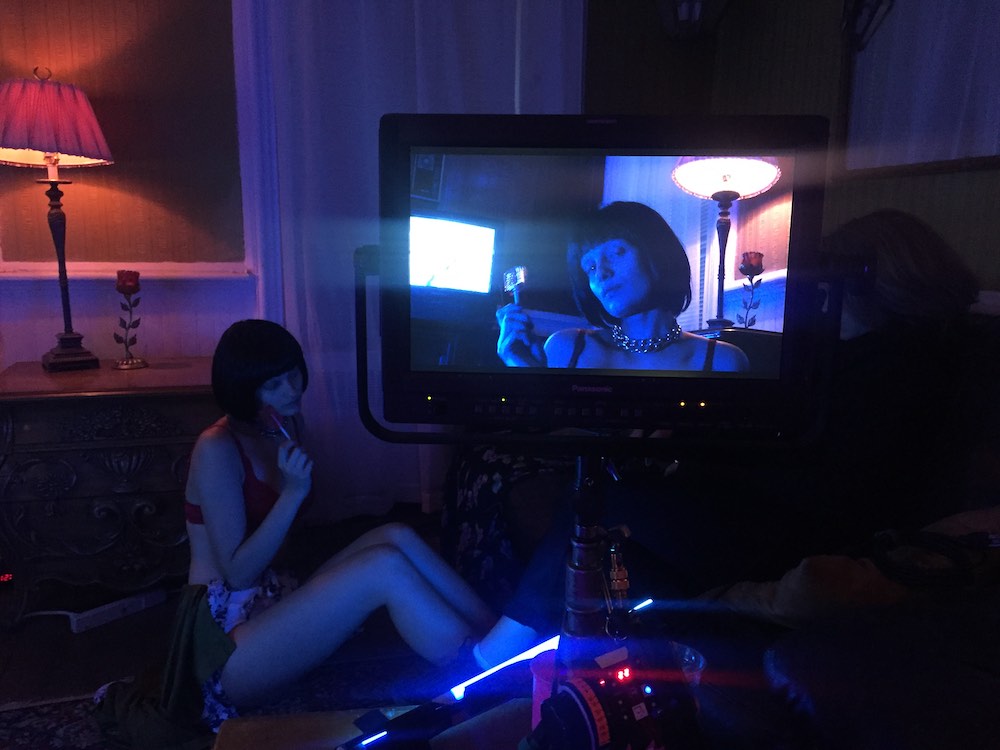 In general, what appeals to you most about horror as a genre? Do you see yourself working within the horror genre more in the future?

I grew up watching The Twilight Zone and reading a lot of Ray Bradbury and I think that style of horror and fantasy is an amazing way to make social commentary. I also love horror that’s done in a really beautiful way. The Shining is my favorite film. I want to keep exploring a sort of surreal space that feels interesting to me and if a concept veers into horror, I like that too.

Finally, what are your hopes for your own career and for women directors in a more general sense in the next year?

For my own career, I just want to do more. For women directors in general, I want things to keep moving in the direction they’re headed until we don’t have to say “female director” anymore. And I’d love to see more stories by women of color.