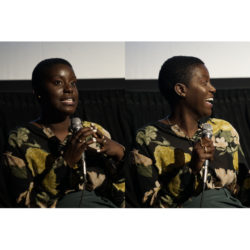 Both directors showcased music video work during the event, including A.V.’s “The Gospel” (click here for our interview with A.V.) and the premiere of S-hekh Shem Hetep’s “I, Too, Am America,” presented above. Free The Bid is excited to feature S-hekh Shem Hetep as an up and coming director, and we had the opportunity to discuss her roots as a journalist, the American experience, the need for less stereotypical representation in media, and more.

S-hekh Shem Hetep Ebron is a freelance director from [Brooklyn, NY] New York City who believes in the transformative power of storytelling. She started her career as  journalist which afforded her the opportunity to travel globally and meet people from all walks of life. This experience ignited her true desire and passion for film making. In addition to being a director and producer, she is also a philanthropist. In 2015 she co-founded TATFor, a nonprofit organization based in Rwanda.

Check out our full interview below!

The title of this video, I, Too, Am America, references a poem by Langston Hughes. Is there a relationship between the poem and your video?

I think the theme of America’s complex identity issues is somewhat similar. I used the poem as inspiration for the video because I Too Am America captured the African-American experience in America during the Jim Crow era and beyond perhaps? Capturing a time in America when this nation of people faced discrimination in nearly every aspect of their lives. It is one of my favorite poems to read when I need recenter my spirit.

Can you tell us a bit about how this project came about?

This project came about from a conversation I had with a friend about my mother’s experience moving to this country from Trinidad and the discrimination she endured even after becoming an American citizen, creating a business and making sure she hired American women. She essentially obtained the American dream under its traditional definition of what it means to be an American… But she had to deal with a lot of setbacks. So I went home and this idea came to me: to create a series of short videos that showcase people and cultures that are often excluded from the American narrative.

What were some of your stylistic reference points for the video’s aesthetic?

I looked at a few dance films, but I really liked the stylistic direction of “Moonlight.” 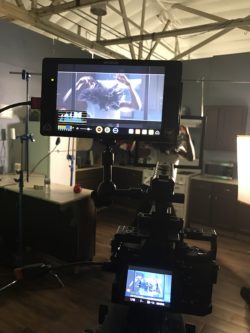 How did the shooting process go? Did anything surprise you about the project’s final outcome, as compared against your initial expectations?

The shooting process was tough because this is the first video I directed where I had a crew and shot on a stage, so a lot of unexpected things happened. I had to learn to re-adjust quickly and communicate changes to the crew. However, what I learned from this experience has only made me a better director and I love the final outcome.

What initially drew you to working in film? How did you find your way to directing?

I went to college for broadcast journalism and right out of college I started working at a local news station, learning quickly that I did not want to be a reporter. My interests shifted and I knew I wanted to be behind the scenes. I did not know in what aspect until I started working at a video branding company and got an opportunity to work on a documentary. I loved it. I knew I wanted to continue telling stories through film.

Who are some of your greatest inspirations?

My creative inspirations come from people I met and learned from while traveling. I do pull inspiration from film directors like Wong Kar-Wai, Alma Har’el, Amma Asante and Ava Duvernay, but I get inspired most when I get life lessons from perfect strangers.

Since Free The Bid is all about increasing the numbers of women on set, have you had any noteworthy experiences of collaboration between other women on projects you’ve worked on?

I haven’t had the chance to collaborate with other women yet, but I recently met a dope DP and we definitely plan to work together soon.

What are some of your goals as a filmmaker – any dream projects?

I am just getting started, so any goal I set now I know I will surpass it. However, I do have this film in my head that replays from start to finish. In my head. Daily. It’s almost haunting me. That will be my dream project: to finally get it out of my head and on screen.

What kind of differences do you think are made by representational diversity, both on-camera and behind the scenes?

More diversity in film across the board would help change the stereotypical narratives that are dominating Hollywood right now. I am so tired of seeing a trans woman in film mostly portrayed as a prostitute or an Arab Muslim as a terrorist or black women as the single mother sidekick. More diversity means more perspectives. We see that happening slowly with shows like Insecure or Transparent but I would love to see more. I live for the day where seeing four black women on a TV comedy series is not out of the ordinary.

Any final words for our community, or for any aspiring women directors?

Be as unapologetic as Rihanna and as fearless as Ava Duvernay when making your next film.