Last week, our supporters at P&G brand Gillette released their “We Believe,” campaign, a 30-year update on the brand’s classic slogan, “The Best A Man Can Get.”

Created with pledged agency Grey New York and directed by Kim Gehrig, the spot asked all of us to take a look at the ways in which masculinity can potentially turn toxic, to dismantle the classic “boys will be boys,” excuse for poor behavior, and to work together for a healthier, safer, more equitable world for everyone. It’s a message that recognizes that many are already stepping up to the plate to address these problems, and ends on an encouraging note, inviting audiences to continue to work toward a world filled with more benevolent expressions of masculinity, better for men and women alike.

There’s been a lot of dialogue in the aftermath of the ad’s release, but as documented in a survey conducted by Morning Consult, the ad succeeded in positioning Gillette as “socially responsible and in-line with consumers’ values.”

“Before watching the commercial, 42 percent of consumers said they agreed Gillette “shared their values.” After watching, that figure jumped to 71 percent. Additionally, the share of consumers who said Gillette “is socially responsible” grew from 45 to 72 percent.” 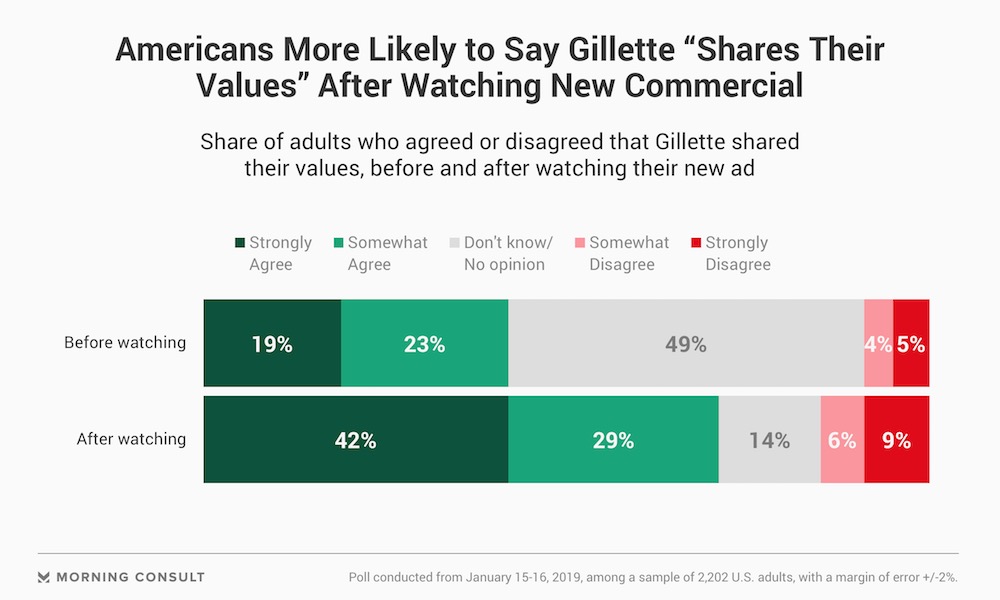 Furthermore, the survey found that the ad increased the likelihood of customers who had previous purchased shaving products from competitive brands switching to Gillette. “Among consumers who indicated they use products from either Harry’s or Dollar Shave Club, 56 percent said they would be more likely to buy from Gillette after watching the commercial.”

As Damon Jones, Vice President, Global Communications and Advocacy at Procter & Gamble, expressed in a Forbes interview, “we’re not saying all guys are bad. We’re not trying to misrepresent any one individual. What we’re saying is, as a collective group, let’s have a little less bad behavior and more good. That’s the big message behind it.”

“What I love the most about this ad is this that [the creative team at Grey New York and P&G] are aware and that you’re talking,” wrote Alaina Shearer in Adweek. “I can tell you as a woman fighting every day for change, awareness from men is important. Not just important, but paramount in order for any real change to begin. Guys, we do need you.”

We commend P&G, Gillette and Grey New York for igniting a vital and important cultural discussion. It takes bold moves like this to shift the conversation and redefine the possibilities we’re shown onscreen in advertising – that’s exactly the kind of brave work that Free The Bid stands for. We’re looking forward to continuing to push the needle forward for men, women, and everyone of every gender, working alongside our committed supporters who aren’t afraid to address real issues.