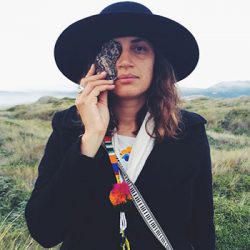 We’re excited to introduce Maximilla Lukacs as a new UNSIGNED director! To help our pledged production companies discover new talent, #FreeTheBid will feature unsigned directors with original voices who are doing work that can lend itself to advertising.

Maximilla Lukacs was born in Budapest, Hungary and moved to California when she was nine.

A deft storyteller, Lukacs’ dreamy, psychedelic and bohemian pieces embrace both her background in fine art and deep passion for social activism. In 2012, Lukacs co-founded the creative collective The Department of Peace. Focused on inspiring young people toward political action, TDP has partnered with Yoko Ono and Sean Lennon, MoveOn.org, The Rainforest Alliance and others to create a series of hugely successful PSAs. Featuring influential artists such as Lena Dunham, Miranda July and Susan Sarandon, Lukacs’ playfully creative PSAs have garnered millions of views, as well as critical acclaim from publications such as The Washington Post and Time Magazine. She currently resides in Los Angeles.

She studied film and fine art at the San Francisco Art Institute. As an award winning filmmaker and fine artist, her works have been showcased at prestigious galleries, film festivals around the globe and featured in publications such as Vanity Fair, T Magazine and The Huffington Post.

As a director, she has helmed countless commercials and short films for Topshop, Minnetonka, Johnson & Johnson, Orla Kiely and the BBC as well as music videos for Courtney Love, Karen Elson, First Aid Kit and Edward Sharp and the Magnetic Zeros.

She has just finished her latest collaboration with Vogue which you can watch here.

We asked her a few questions about her process:

1. Why do you want to direct commercials? Because it’s a way of engaging the cultural dialogue, being creative and getting paid a decent rate. On the surface commercials are about selling goods and services but underneath, they are about IDEAS and world views. Commercials have the power to influence culture and that in turn influences politics and the world. They are moving the needle on issues that the whole world is struggling with. So I think it’s a really important place for a diverse range of voices to have a strong presence. As an artist I also really enjoy working with limitations and with commercials I think it’s a great test of your creativity to work within the set limits of the identity and existing language of a brand but still make something that has your signature imprint. I feel that I can bring a very unique perspective to the commercial world. And in this moment I think people are really looking for new voices, new visions.

2. There’s a certain bohemian tone in your work that is very free and romantic. What do you feel it’s rooted in? I was born in eastern Europe… in Budapest to be exact. So I think there is something very free and romantic in my genes! I have always been very much of an individual who had to do things my own way. And part of that has been fighting to keep my free and romantic world view.The bohemian tone is just who I am. Spending the first decade of my life in Europe, I traveled a lot with my parents. Even though we lived in communist Hungary, my father was a nuclear physicist and because of that had some special privileges to travel, so we were able to leave every summer as a family and I loved that feeling of being on the road and waking up in a new country everyday, hearing a new language everyday. Being in motion and experiencing new things is where I have always felt the most at peace.I went to an arts high school (The LA County High School for the Arts) and was exposed to all the game changing artists at a very early age and at the same time was going to underground music shows all over LA. Music has always been a huge source of inspiration for me! So all my formative experiences were definitely very “bohemian”.I have always lived as an artist and surrounded myself with an artistic community for which I am so utterly grateful. And I feel so lucky to have gotten to collaborate with so many super talented friends and have also made great friends working on projects with other artists that I admire. Through film I get to bridge all the worlds I love – painting, dance,music, literature, photography, architecture. I love being able to bring all these elements together in film which is such an inherently collaborative medium. I am also super inspired by the infinite expanse and vast landscapes of the West Coast – especially California. And there is definitely something very free and romantic about living here and constantly being faced with that infinite horizon.

3. How do you work as a woman director when you’re not signed? You’ve just did a spot for Vogue magazine and you get great projects. How does that happen? I have been signed in the past with Somesuch &Co in the U.K. but never in the states. But all along I have always gotten most of my jobs through people directly reaching out to me. Usually it’s from something else that I have put into the world that they have seen. Sometimes it’s just through friendships that I have built with people over the years, who end up in all sorts of interesting positions. I have been steadily putting work out into the world and building lasting creative relationships for the past decade and that just tends to generate it’s own momentum.

I also totally understand the value of a production company and the kind of jobs you can pitch on and get only when you have that support.

4. Can you tell us about your new work for Vogue? The Vogue project came about through my friend Jaclyn Hodes who has a super elegant clothing line called AWAVEAWAKE that is all ethically produced hand dyed clothes that she produces in Bali. We have been wanting to work on a project together for years, but the timing was always off. This time she was in LA and her whole collection was in LA while she was on her way to the South of France to shoot her S/S 2017 film for Vogue. Then our dear friend Flo Morrissey arrived in LA and the lightbulb went off in all of our heads that the three of us should collaborate and make the film together in LA. I had done a few projects with Flo and loved working with her. So it all came together very organically and very quickly and I am so proud of what we have created.

After the shoot Flo flew back to France and while she was on tour in Italy she wrote an original song for the film. We ended up using the very first take she sent me because it was just so beautiful and perfect! She tried to re-record ‘properly” in a studio but all three of us knew that the first “demo” was just it. So that is what is in the film now.

5. If you could get any boards what kind of commercials would you chose to direct? I think women in the commercial world often get relegated to only doing feminine hygiene ads and beauty spots. Don’t get me wrong, I love to do beauty and fashion campaigns. I would love to do fragrance ads etc. and I welcome all that work. It is so fun for me! I really love it! But I am also interested in taking my aesthetic into places where it would be more unexpected. For example I would love to re-interpret car commercials for a female audience, or let’s just say for a wider audience. Just approach them from a different point of view. I would love to work for Apple or any number of innovative tech companies. I would love to do sportswear ads that celebrate strong women. I love adventures and new experiences so any job that takes me to a part of the world where I have never been I welcome with open arms!

I am also very drawn to commercials that have a social impact component. I have done a ton of work in that arena and I love how many companies are aligning themselves with good causes.

In this day and age I am glad companies are realizing that they can make a profit but also function in a way that is also sustainable for our planet.

Obviously I would like to direct commercials with strong female characters and with a female empowered message. But I also just love experimentation. So anything that “can’t be done”, an idea with a technically or conceptually challenging component, something that pushes the boundaries of what we can do with cameras, with story, with visual experiences, that is exciting to me.