In “Pagans,” filmmaker Lucy Luscombe‘s carefully observed portrait of adolescent loss, grief ripples outward through a tight-knit circle of young friends. Death is difficult to process at any age, and the three girls at the center of Lucy’s film have a doubly challenging gauntlet to navigate: understanding the passing of their close friend while attempting to figure out their place in the larger world.

A masterful example of casting, the largely untrained trio of actresses that anchor the short seem as thought they’ve known each other for their whole lives – their relationships feel organic, lived-in. Lucy tells their story carefully, capturing subtleties of emotion that are often difficult to represent on film, but which resonate authentically with the confusing reality of mourning. Shot through with references to England’s history of pagan ritual and magical realist flourishes, “Pagans” is a heartfelt and tender portrait of the teen psyche in the midst of learning to cope.

Click HERE to view “Pagans,” which premiered exclusively on Dazed this week!

We spoke with Lucy, signed to Caviar‘s roster for commercial representation in the UK and Imposter in the US, about her own rowdy and intense teenage friendships, mirroring grief’s distortion of reality through the use of VFX, and her directorial techniques for coaxing believable performances out of her young cast. 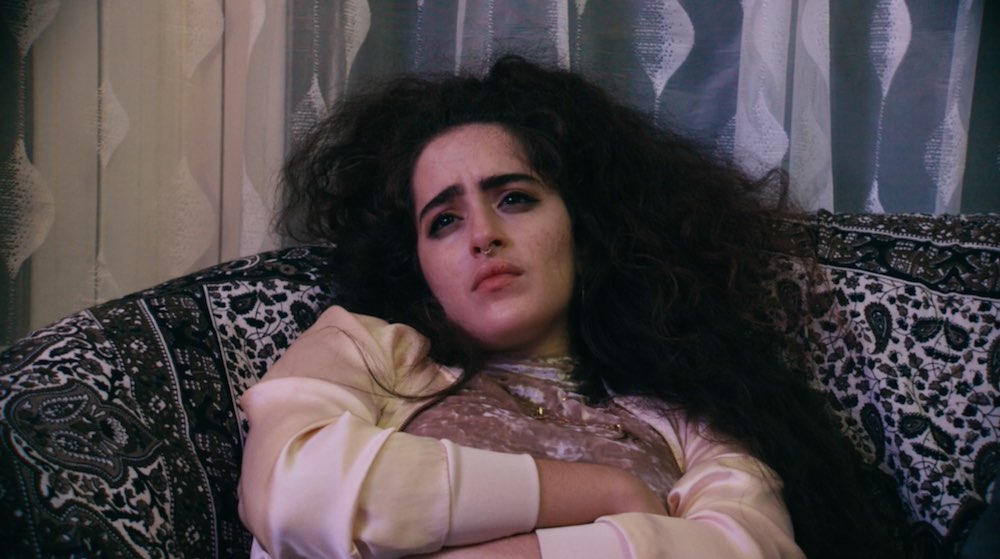 What drew you to the initial idea – what were you hoping to explore in the making of this film?

I’ve always been interested in the alchemy of grief, notably adolescent grief. There’s something quite unique about losing a friend – or even an acquaintance – in your formative years. I think most people can remember ‘that kid who died’ and the horror of youth interrupted. I was also interested in way grief plays out within a friend group; when you can’t decipher loss on an individual basis, let alone a collective one.

The female relationships captured in this film are so well-developed. Were there particular aspects of female friendship that you were hoping to showcase here?

There’s a romance to adolescent friendship that I wanted to explore – an intimacy and heartbreak that exists beyond words or photos, a tribalism that comes from your first encounter with ‘people like you’. I don’t think any of this is exclusive to female friendships, but I think some of the characteristics and dynamics of the friendships in the film are probably reflective of my own; a bit rowdy, a bit intense, a bit wild. 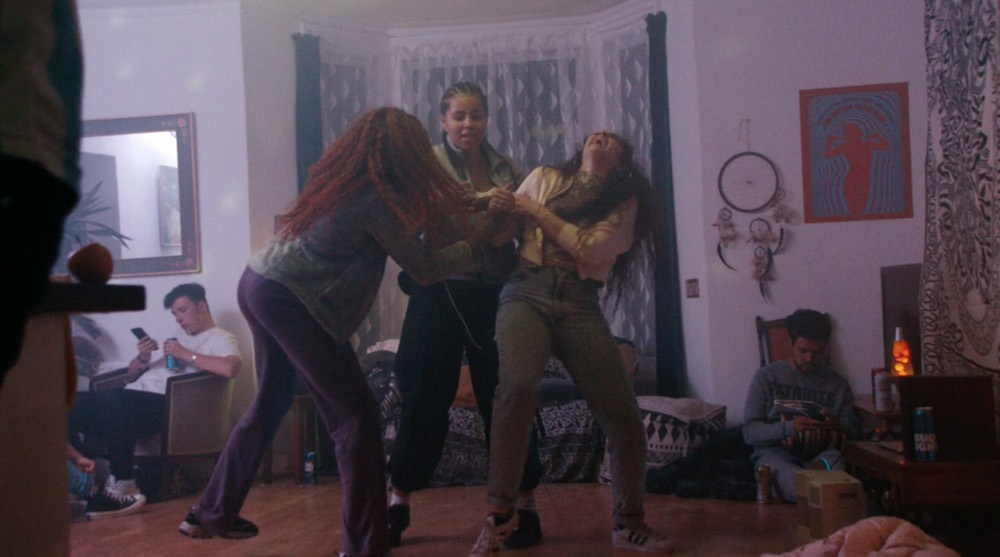 The actors you worked with on this film seem perfectly cast – how did you find the talent you were looking for?

My casting director, Coralie Rose, and I called a bunch of memorable young women we knew and asked them to bring their mates to a disused office bloc one Sunday. We tried out different group dynamics and looked for cast who were capable of being in the moment instead of ‘acting’. I’d worked with Frankie before on a docu-film called the A-Z of Modern Girlhood and totally fell in love with her. Vivian was our only professional actress and could maneuver the scenes in a really interesting way. Juliette showed up with this crazy energy; really open. As a group, they had this immediate connection, despite not really knowing each other. 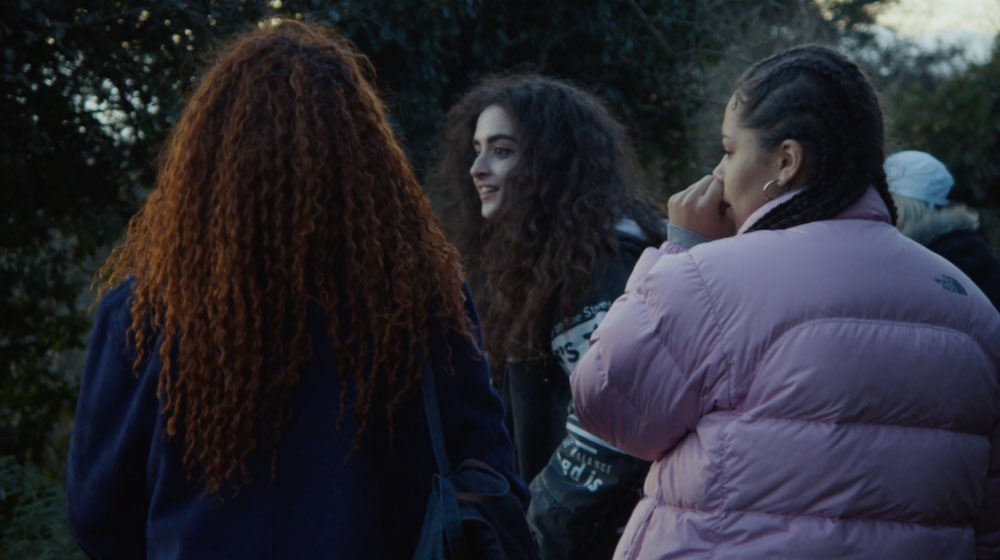 What kind of direction did you give, in order to elicit these performances from mostly untrained actors?

We did some workshops before shooting; different exercises that helped the cast be present within a scene. I wanted them to create some memories together, so I had them choreograph the dance scene without me. They didn’t have a script or know the story: they were drip-fed information before each set up to keep it fresh. They each had individual notes on who they were and how they related to each other, which also informed the dynamics within each scene. It sounds complicated, but it felt pretty intuitive at the time.

Tell us about the surreal elements in the story; what was your thought process behind including these distortions of reality?

Grief can distort reality, even more so when you’re young and don’t have the tools to rationalize what’s going on, or when your mind is playing tricks on you. I was thinking about symptoms of trauma; compulsions, intrusive thoughts, disassociation and how that might play out cinematically through visual themes, like fire.

How did you realize these visuals on film – did they pose any unique technical challenges?

Surprisingly not, really. It’s always tricky doing in camera VFX, especially on a tight budget, but it ended up being pretty straightforward. The post VFX were just about getting enough options for The Mill, which we managed to do despite filming in the midst of a nuts bonfire parade. 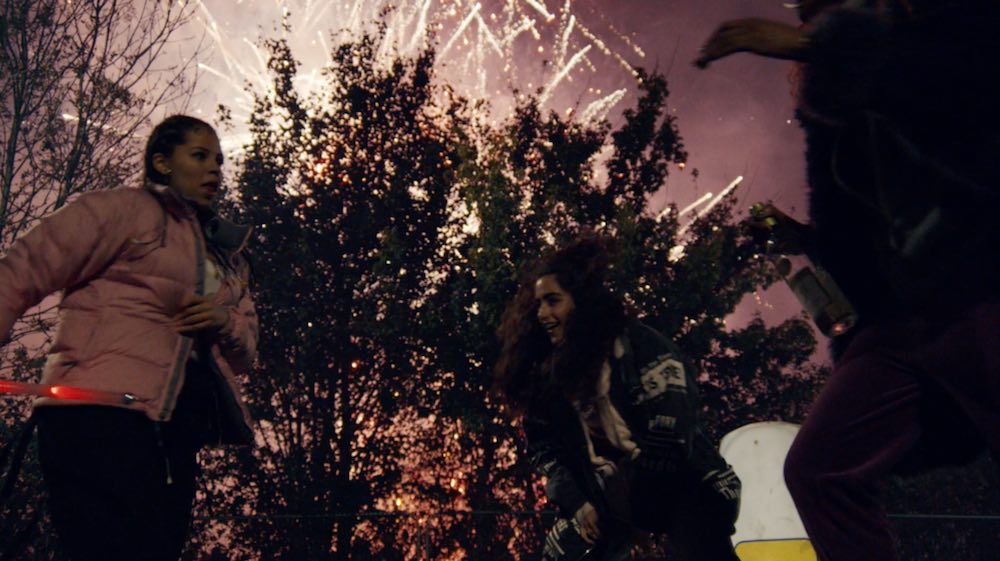 In general, did production of this film test or expand your abilities as a filmmaker in any particular ways?

The production was hands down crazy. But there was a method to the madness – my producer Amanda Mesaikos and I  made the decision to be ‘responsibly irresponsible’. That’s how it had to be. If you choose to shoot in ‘unshootable’ environments, like a bonfire celebration of 80,0000 people who descend on a shut-down town that you can only navigate on foot, you have to just go for it. It’s a reminder that when choosing crew, you have to work with people who are just d-o-w-n and don’t get flustered. I’ve shot with Ben Thomas (DP) in a number of crazy live locations, but this was by far the most mentally and physically testing. Everyone had to work as a team, everyone was carrying shit, everyone was navigating the general public. We failed to protect Ben from a firework thrown at him, but he managed to emerge unscathed (kind of).

How important is the film’s setting to the story you were hoping to tell?

Lewes Bonfire night has this strange, intriguing vibe. It marks both Guy Fawkes (the uncovering of the gunpowder plot) and the death of 17 martyrs who were burnt at the stake in the 16th century. It’s kind of anarchic and aggressive, but also a celebration. This chaotic combination felt like a perfect reflection of the characters’ inner worlds, but also foreign enough for it to be this weird adventure for them.

I know the White Horse location (in the final scene) quite well and find something both quintessentially clumsy  and mysterious about the chalk hill figures of England. The real neo-Pagan hotspot is actually down the road, at The Long Man of Wilmington, but the White Horse of Litlington spoke more to the story.

The film begins with quite an introspective, tight frame so I wanted to finish on something wide and open. As we pull back on the final shot, the characters’ big emotions become somewhat insignificant against the expanse of the English landscape. And I think there’s a collective comfort in that. That we’re all just specs on a slab of land with a multitude of personal dramas. The White Horse signifies the dramas that have been before and will surely come after – the cycle continues. Sasha says goodbye, and we hear her voice get carried away with the wind. But most importantly the film ends as it begins, with the characters chatting shit together. Because I think that’s what friendship is made up of, really –  just you and your friends, chatting shit. 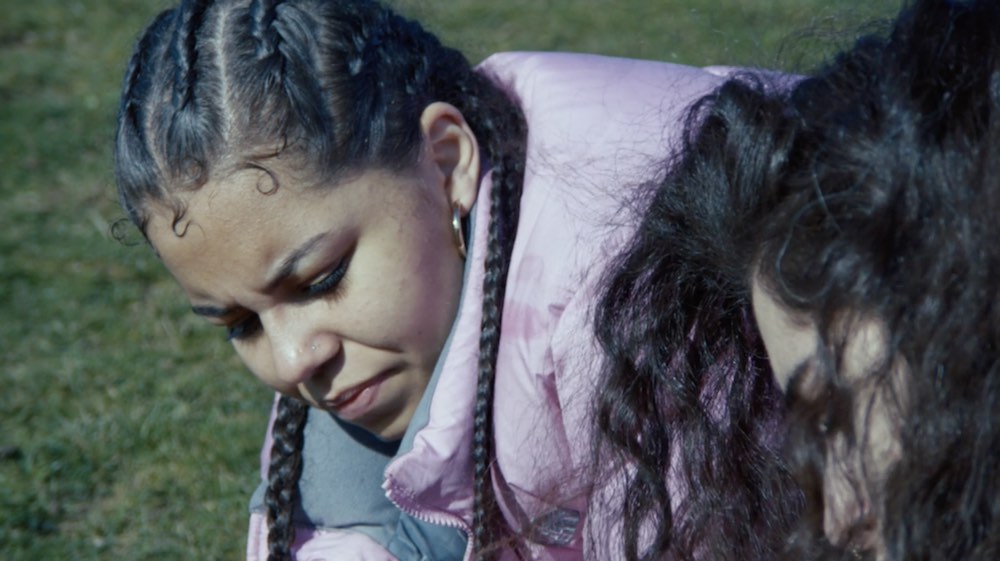 What were some of your main aesthetic reference points for the film’s look?

90s rave photography. Dodgy Celtic prints found in Camden. This amazing film called “Arcadia,” by Paul Wright; a surreal remix of archive footage shot in rural Britain. When it came to the grade, James Bamford and I spoke about bringing color and shape to the film while maintaining an inherently UK feel.

What aspects of the final product are you most proud of?

The girls’ performances kill me. I totally believed in what they doing when we were shooting, and I’m so glad that it translates into the final film. I’m also crazy proud of what we achieved as a production; to shoot all those locations on a micro budget and crew was a real feat.

How do you feel that “Pagans,” relates to the rest of your work as a filmmaker – does it represent a step in a new direction for you?

I think it’s just what I’ve been gearing up to do for a while, and as soon as I had the savings to put down, I did it. It feels wonderful to start building upon this now. 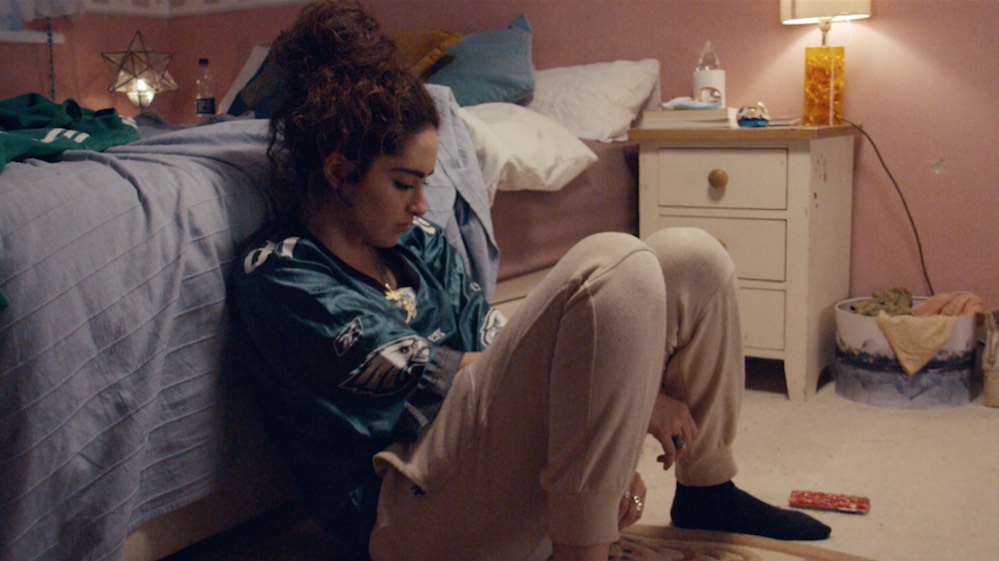 Are there differences in how you approach a project like a short film vs a commercial job? What skills have each kind of filmmaking taught you?

I always try and approach performance in the same way, as I think it’s really gratifying to see something alive on screen – whether it’s in a commercial or a film. I’m quite a collaborative director in general, but I’m probably extra communicative on commercials as that’s part of the job: making sure the agency feels like part of the process whilst being clear with your crew as to what each scene entails, to avoid faffing. Perhaps commercials have to taught me how to plan for every variable, which means I can be a lot more spontaneous when it comes to shooting.

What exciting things can we look forward to seeing from you in the future?

I’ll be looking for feature funding (holla!) whilst working on a continuation of “Modern Girlhood.”

Finally, what are your hopes for 2019 – both in terms of personal goals and desires for the community of women directors as a whole?

I’m just really excited by the wealth of UK talent that’s coming up: Raine Allen Miller is killing it in commercials; Matilda Finn is bringing the most mind bending-beautiful music videos; and Jessica Bishop’s short, ‘Platform 1’ is worth checking out for a dose of greatness. I just want them to keep doing what they’re doing and raising the bar for us all. 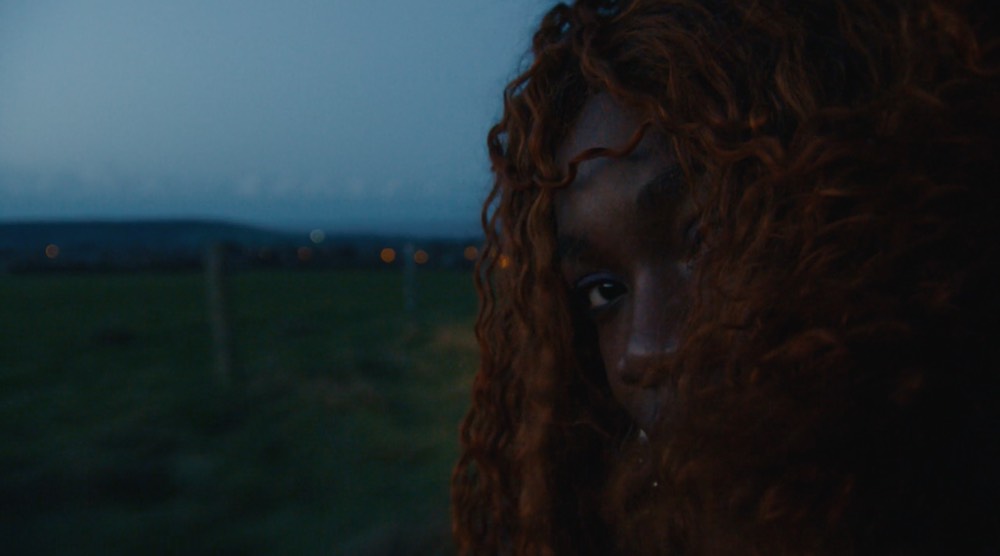