Alcoholism doesn’t always present the same face – in many cases, it can be a painfully familiar one. In her latest short film, “Girls Who Drink,” British writer-director Lily Rose Thomas, signed to the roster of production company MyAccomplice, provides a brutally honest observation of how insidious and mundane problem drinking can appear.

“Girls Who Drink,” observes three young women caught somewhere between the echoing din of last night and the cold silence of tomorrow morning. Patching together memories, sensations, fears, fantasies and emotions, they try – whether they know it or not – to navigate their relationship with alcohol. From both the beating heart of the party and the deep submersion of thought, this short film examines the psychic mark alcohol leaves behind, long after the party is over.

We spoke with Lily about her personal relationship to her subject matter, how Nan Goldin’s photography and Molly Drake’s music played a role in crafting the film’s aesthetic, and the imaginative use of sound design to bring viewers into her character’s experience. 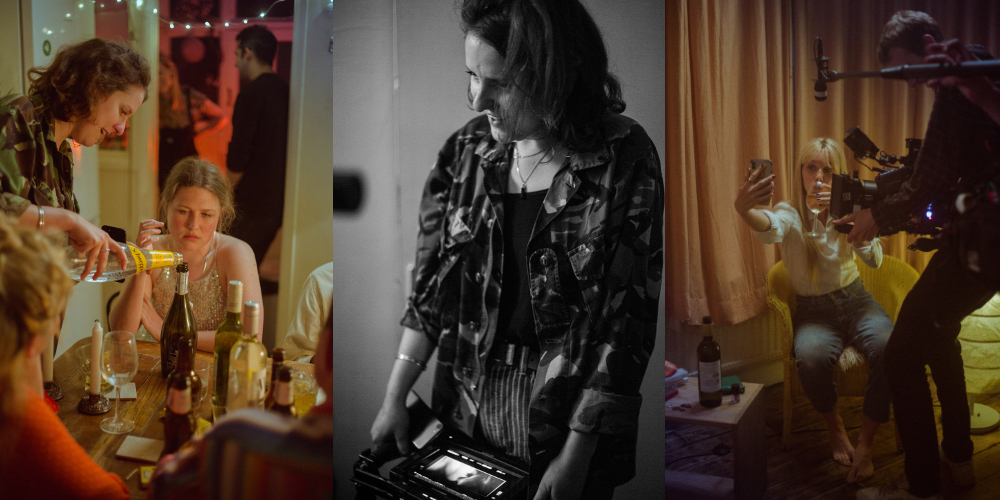 Girls Who Drink is a fascinating meditation on different uses of alcohol as a coping mechanism, something which many women can relate to. What originally inspired you to tackle this topic as a short film? What’s your personal relationship to the subject matter?

“Girls Who Drink,” is a really personal, almost autobiographical project. I’ve always been incredibly aware and critical of my own relationship with alcohol – perhaps because of growing up with an alcoholic parent who got sober when I was a teenager. I’ve gone through periods of not drinking myself, and it really makes you analyze not only your own behavior, but that of the people around you.

Often, you need to take a step back to realize that the culturally acceptable behavior of heavy drinking is really quite worrying – but because it’s so normalized, it can be hard to see who needs help. If you are struggling, there is always someone who’s done something worse than you, or someone to tell you it’s not that bad. And if you do take it too far, then perhaps you might get told to drink less, or that you need to learn to say no to that last drink.

For some people, that literally isn’t possible: when you start drinking, all bets are off, even if, deep down, you know it will hurt you. That is completely what the girls in the film are going through. I wanted to show that for some people this kind of loss of control isn’t a choice – it’s something really painful that comes from having a hole that they need to fill, rather than because they are irresponsible or haven’t learnt their limits yet. I think often people judge the consequences of heavy drinking without looking at the emptiness underneath that might drive them to it – you don’t lose everything by choice. But you also don’t need to have lost everything to be in trouble, which is also true of the women in this film for whom outwardly nothing seems wrong.  And as a female filmmaker, it felt natural to view this from a woman’s perspective – it’s not one we see very often.

Once you had the initial idea, how did you go about realizing the short film? How was this project funded?

The themes in “Girls Who Drink,” come up a lot in my writing – I’m really interested in these kinds of flawed, problematic characters who are looking for a way out. I was working on a separate idea about a woman in recovery, but I started thinking of approaching it from the other side, and trying to portray actual drinking in a sensitive, non judgemental way, that was more about the psyche than the consequences. I met the producer of this project working on a commercial job, and we decided to try and go for it together and I was very fortunate that MyAccomplice, the production company who represents me, allowed me to realize it.

What were some of your aesthetic reference points for the film’s look?

I was looking at photography quite a lot as references for this; there was a lot of Nan Goldin photography, which has always been a go-to of mine. I absolutely loved the edit of “Sharp Objects,” and the use of flashback as a really subtle stylized thing, where it can often be a bit flat-footed. That was definitely a big influence for the flashback shots within Girls Who Drink.

The performances are wonderfully naturalistic. How did you approach casting for the lead roles? What work did you do as a director to develop the actors’ relationships to their roles and inspire authentic performances on the day?

I worked closely with Georgia Fleury Reynolds, the casting director, on the casting for this. I had actually met Lauren on a writing weekend, and having discussed the project with her then, I thought she would be able to bring a lot to the project. Georgia really understood that the performances absolutely needed to be very subtle, and everyone we cast really got this. It’s more about the introspective nuances of worrying about your drinking, rather than the consequences. We didn’t want performances that were falling over, throwing up, passing out – although the actors do handle the drunkenness brilliantly, I think.

I sent them each an article I’d written for i-D about problem drinking, as well as a bit of prose that described the feelings of a problem drinker in more depth; I hope that helped. A lot of the dialogue was improvised, so we spoke a lot on the shoot about what you might be saying in a given situation – so I think that really helped with the authenticity. It was kind of in their own words.

Did you work from a tight script for the dialogue, or was there any improvisation?

There was a lot of improvisation – I had actually planned for “Girls Who Drink,” to be VO-lead, but as soon as I started seeing the casting tapes, I changed my mind, as it felt like a missed opportunity to not use their talent. I gave them starting points and we went from there.

For example, the scene in which Kate, the girl at the party, is getting increasingly drunk and loud, I asked a few friends what the worst stuff they’d heard drunk people at parties say was and I gave these to Kate to elaborate on. Some of it was cringey, some of it was just the insincere nonsense like ‘we should hang out more!’ or ‘I know I don’t know you very well but I really respect you’.

Some of it we didn’t use as audio, but it just really helped in conveying the emotion: for example, when Kate flashes back to the night before in the cafe, where she is gesticulating wildly, she’s actually talking about how much of an inspiration Sylvia Plath is and reciting ‘Daddy’…just really cringey stuff that you know you wouldn’t do sober. For the bedroom scene, we discussed what you might do and Lauren suggested the phone-call to an ex and we discussed what you might say from there.

Tell us a bit about the shoot itself – how long did it last? Did any aspects of the shoot pose any particular challenges?

It was only a two day shoot, and we had a huge amount to fit in, so it was quite a challenge! I think the most stressful part was definitely the scenes in the pool. It’s actually shot in my old school pool, which they kindly allowed us to use, but we only had one hour in there. It was extremely humid and hot, and as we reached the end of the hour, there was a children’s swimming class waiting at the door! We were under serious pressure, but we did get the shots in the end.

Did the creation of this short film push your filmcraft in any new directions?

Definitely! It’s my first time working with dialogue, and I would love for my next project to be properly scripted…that’s the next challenge.

One of the most haunting elements of the film is the use of Molly Drake’s “Happiness” – what led you to select this song for the piece, and how does its use work to shape the viewer’s experience of the film?

I was really, really struggling with the music for this film and nothing was working – I had initially wanted something much more chaotic and upbeat, but tonally, the tracks we were trying just weren’t right. I was sent a selection of music options and the minute I heard Happiness, it changed the whole film and the edit completely transformed. I’d never listened to Molly Drake before, but her music is amazing. I love the juxtaposition of the lyrics that should be hopeful against the haunting tone, and the way that they are almost describing the girls themselves – they are desperately seeking this happiness that they can’t quite touch.

Editing and sound design are both crucial in submerging viewers immersively into their experience of the characters’ realities. How did you work with the sound mixer and editor to achieve the effects you were going after?

The sound design was particularly crucial in creating the chaos that the girls are experiencing. As they start to let go and begin to unravel, whilst seemingly feeling relieved, the sound design really emphasizes that the loss of control is not a good thing.

A lot of the drinking was recorded by either Guy, the sound designer, or me, to make it sound like it was really inside your own head. Then, as the girls slide in to drunkenness, we used reverb and a low rumble to make it feel like they are increasingly disconnected, like they can only hear snippets of conversation within the overwhelming space of their heads. We finished it with a ringing in your ears, like you might experience after an explosion, to exacerbate the overwhelming experience of getting really really drunk.

The sounds of the hangover are amplified, like the way the spoon hits the china that feels much too loud when you are already feeling sensitive. In terms of the edit, we wanted to juxtapose the chaos of the night before and the almost sinister way it slowly creeps up on you in the hectic climax in the middle with the starkness of the morning after. The edit becomes a lot more slow in the second half, so the tiny flashbacks can really pierce you. The bleakness of the music really added to this.

What thoughts do you hope viewers come away pondering, after watching this short film?

I hope that anyone who watches this who has an idea of what an alcoholic looks like in their head might have their perceptions changed. Alcoholism doesn’t discriminate – it can happen to anyone. It’s not about being careless or stupid, but the loss of control often comes from a much more painful place than you might think. There shouldn’t be any stereotypes, because it can happen to anyone.

Do you have any upcoming projects that our audience should look out for?

I’m working on a short idea about a dinner party that goes disastrously wrong, and also with Georgia Fleury Reynolds, who was the casting director on this, on a feature project about a group of friends dealing with grief.

Finally, what are some of the best pieces of advice that you’ve received over your filmmaking career?

I think the best advice I’ve had is to do your research, watch films, go to shows, look at photographs… there is so much to learn from what other people have done before and your work will be better for it. And also to never give up – so many people have told me no, or literally that I’m not good enough or experienced enough, but if you really believe in what you are doing you have to keep trying! Never take no for an answer. 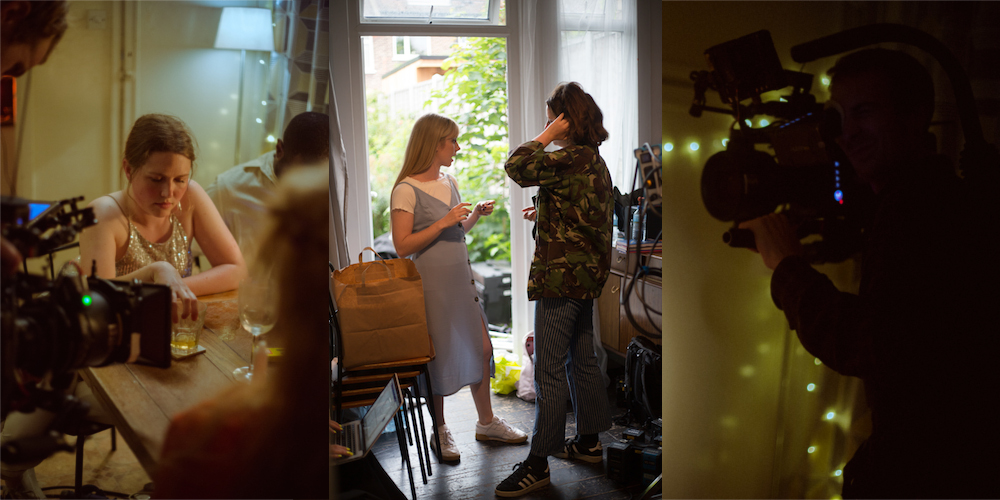