Premiering yesterday on the Real Stories documentary channel, “Surf Girls Jamaica,” a short film by the director duo Joya Berrow and Lucy Jane, focuses on Imani Wilmot, a Jamaican surfer who uses the sport as a means of transforming the lives of the women around her, in Kingston and surrounding areas.

“Culturally, Jamaican women face a lot of abuse,” Imani says. “It can make people either really insecure, or you learn to develop this big, tough shell.” Through surfing, Imani allows women like Melissa, forced to rebuild her life after her release from prison, to break through their shells, heal, and change their lives dramatically.

The film captures the landmark of the first all-female surf competition in Jamaica. Imani is a role model, working with international organisation, Black Girls Surf, to inspire women of color all over the world to see a place for themselves within the global surf industry. Her goal is to inspire the next generation of female Afro-Caribbean surfers, and to continue as the driving force of this vital movement..

We spoke with Joya and Lucy about their goals in shining a light on Imani’s story specifically, forging emotional connections with their subjects, and the need to dismantle stereotypes that prevent women from getting the chance to capture extreme sports on film.

“Telling Imani’s story stands for a huge amount against the backdrop of the typical depictions of women’s stories in surfing. We are stuck with the one-dimensional image of a sexualised white female surfer that has perpetuated as the stereotype, driven by large brands who shape global surf representation.
This film offers people the chance to see the surf industry in a new light, to see the work of a role model understood and represented.

On a very human and emotional level, the film shows the true power of surfing as a therapy, which Imani has created access to through her work. “Surf Girls Jamaica” is the product of Imani’s lifetime dedication to inspiring and encouraging black women to feel safe to get into and enjoy the ocean.

By creating awareness to the detrimental effects of the lack of diversity in global surf media, we will change attitudes and behaviors and help to build strong communities towards a surf culture that inspires and includes everyone.

We spent a month at Jamnesia surf camp with Imani and the whole Wilmot family. Over the course of the four weeks, we slowly got to know the women coming to the camps more intimately, and we naturally began to focus on Mel and Terry, as their stories personally showed the huge impact of Imani’s work, in different ways.

We were a split, all female, Jamaican / British crew while we were out there working, with our fixer Melissa Fearon (who also features in the film), as well as Janine Titus (Apple), talented drone operator and sound recordist. We were a tight crew: working with Imani always, going on road trips to surf spots and into downtown Kingston with Mel to capture urban scenes, with early morning calls to catch Imani on the glassy waves before the sun came up. We shot a lot of footage of more personal Wilmot family scenes, but in the end of the edit, we didn’t have room to include them. We also shot many interviews, through all of which we continued to learn more and more about the place, culture, and what Imani’s work meant to the area. It was incredible to connect emotionally to these people through their interviews.

Free The Bid is a very necessary platform to promote the extreme talent of the creative womanhood that is out there globally. The mission to find women more opportunities to bid on commercial jobs in global advertising is a very real aim – there should be more adverts told though the eyes of  diverse all-female crews. There is an over-abundance of male storytelling, which is not representative of how we see ourselves, especially within the intersection of female filmmakers working in extreme sports.

Women are often seen as the weaker gender. Extreme sports filmmaking often involves harsh conditions, tricky underwater equipment…our attention to detail and perseverance means that anything we set our minds to, we can do, with the force of a woman behind us. The other issue is the way that women are portrayed in sport through visuals, to the point where the exercise and the real grit of the motion has been washed away. We need to see more realistic and empowering images of women in sport.” 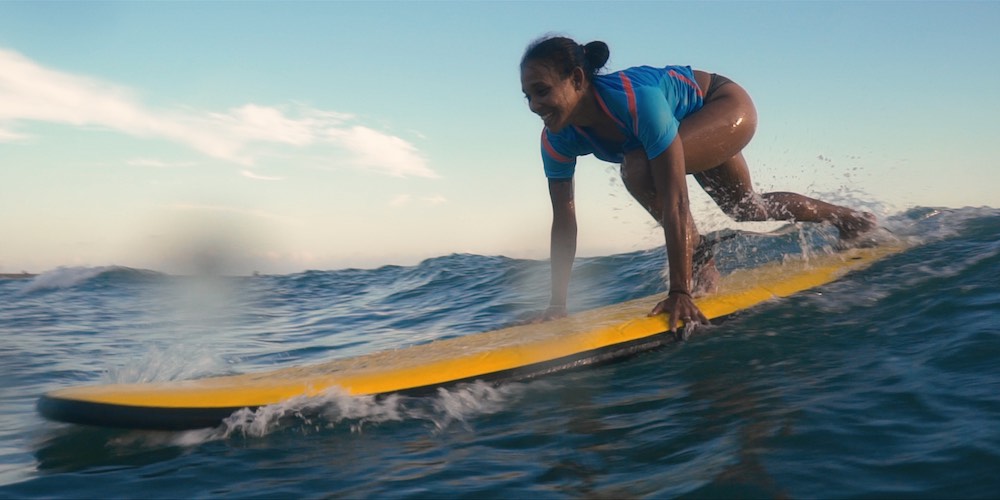