There’s no mistaking one of Jessy Moussallem‘s visionary films. Signed with Phantasm and Caviar, Jessy’s signature visual sensibility takes its cues from her home country of Lebanon; it’s a vision shaped by “people I’ve met and stories I’ve heard.”

Last year, Jessy burst onto the scene with her arresting (and heavily awarded) music video for Mashrou Leila‘s “Roman,” an ode to the power of Middle Eastern womanhood. In her two latest projects – “Heart of Sky,” a 14-minute long visual album for Damian Lazarus & The Ancient Moons, and “Embrace,” a music video for artist Agoria, Jessy turns her lens on new subjects.

Moving between anthropological and magical realist approaches, Jessy shows sequences in the lives of Lebanese marijuana laborers (“Heart of Sky,”) and restless groups of soldiers (“Embrace”). The moments she captures – sunset wrestling matches, cars filling with smoke, a memorable Last-Supper tableau – are bursting at the seams with the richness and complexity of human experience, examined through a unique, empathetic gaze.

We spoke to Jessy about meeting the Escobar of the Middle East, taking inspiration from Second Life, and the need for more humans who challenge the system. 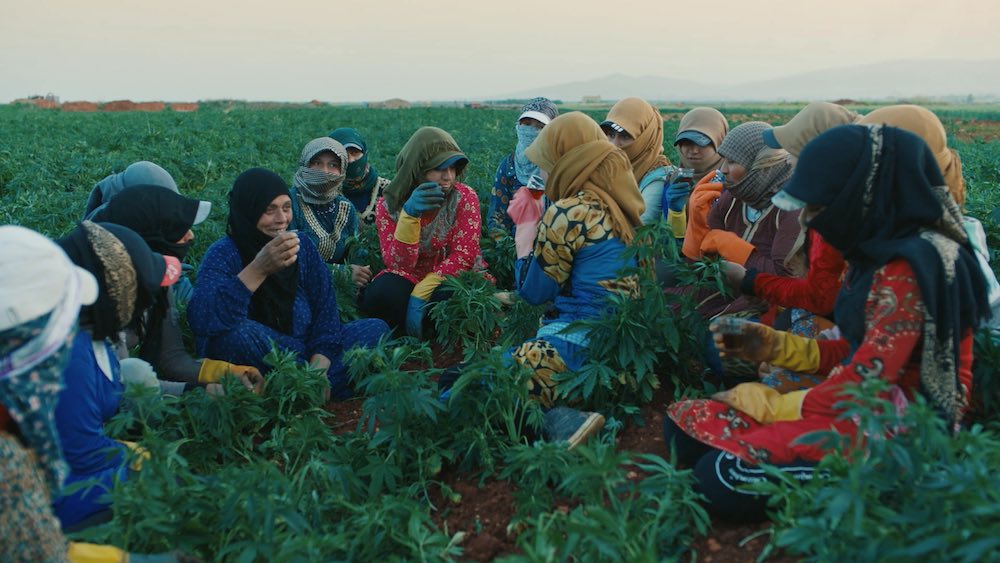 “Heart Of Sky” is a journey between mundane and poetic moments in the lives of the inhabitants of Lebanon’s Bekaa valley. Tell us about the process that led you to focus on this particular region with this project.

While I was scouting for another film in the Bekaa valley a year ago, I came across a beautiful green stretch of marijuana. A group of women laborers were sitting on the ground surrounded by the spiky leaves, taking a break from their work and drinking tea as their children played beside them. The peaceful scene in the controversial setting made a strong impression on me.

The hashish trade is illegal in Lebanon. Hypocritically, however, they are operated and protected by political sectarian militias who benefit from the profits. This was a wild journey from start to finish. I lived in the valleys doing research for a month and a half, where I met people from every level of the industry. I spent time in the fields with the farmers, in manufacturing garages with the laborers, with outlaws in hiding, in the homes of small time dealers and the mansions of big time ones. Somehow, I worked my way up until I found myself in the presence of the Middle East’s Escobar.

After all this, my intuition led me back to the scene and the people that I first met, those who see the red hash as the valley’s gift, the community that tends to the fields. 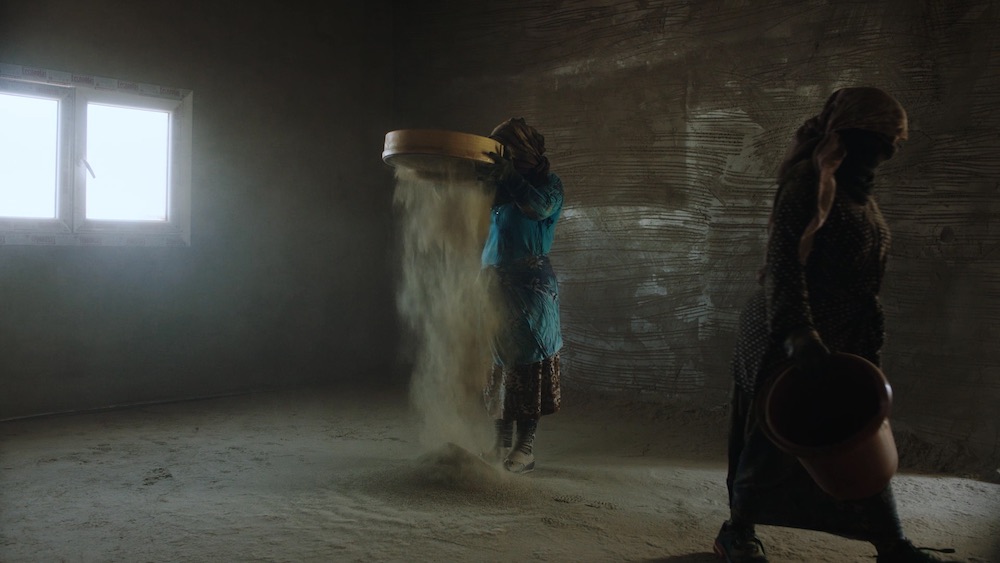 The film was created in collaboration with Damian Lazarus & The Ancient Moons, whose album (also titled “Heart Of Sky”) provides the soundtrack for the short. How did the collaboration arise, and what was your cooperative working method on the project?

John Hassay, the commissioner, got in touch with me, saying that he would love to shoot something with me. He sent me Damian’s album and told me that Damian was looking for an atypical music video – the only brief was that he wanted a short in which we could include different tracks from his album, and that he wanted something a bit psychedelic. I had complete freedom on the script and on choosing the tracks. There were zero changes made on the final edit. There was only a discussion between Damian and I, at the end, on the title: I wanted “RED,” as a title, Damian wanted “Heart Of Sky,” like his album’s title. We came to a compromise, naming it “Heart Of Sky,” in English and ‘أحمر’ in Arabic, which means Red.

How long did the shoot last? 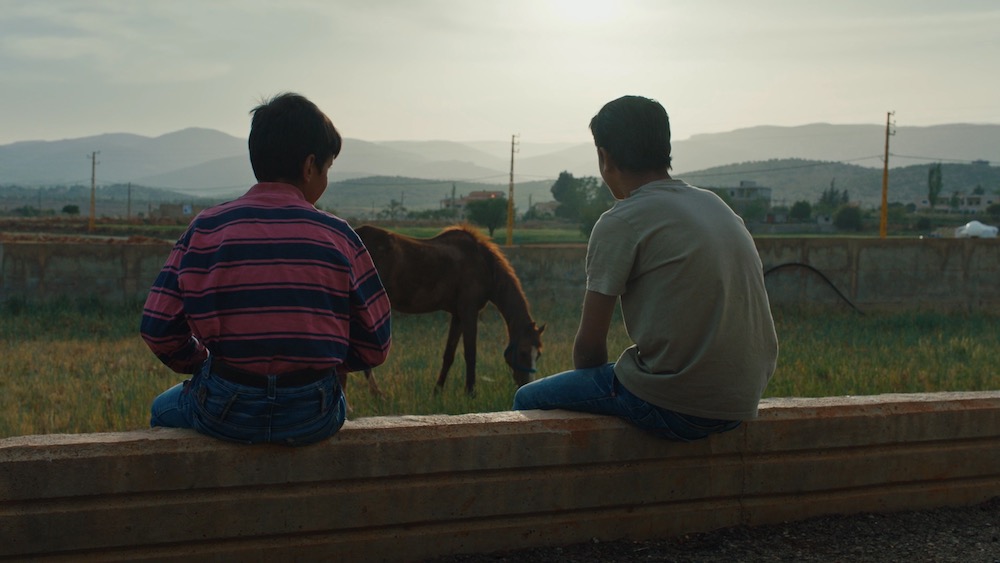 Some sequences of the film read as documentary, while others feel more constructed. What level of scripting did you employ throughout the making of this film? Were there any particularly notable moments that evolved spontaneously?

The film blends documentary and fiction. The scenes were scripted around real people and real situations. Most of the scenes of the film, if not all, were scenes I saw while I was living there. The ‘constructed’ scenes are situations that were ‘replayed’ by the same people I met, in the same place I saw them. Even the 3D woman was inspired from “Second Life,” a video game played by a lot of the kids there, in which they can basically invent a virtual life where anything they want can happen. 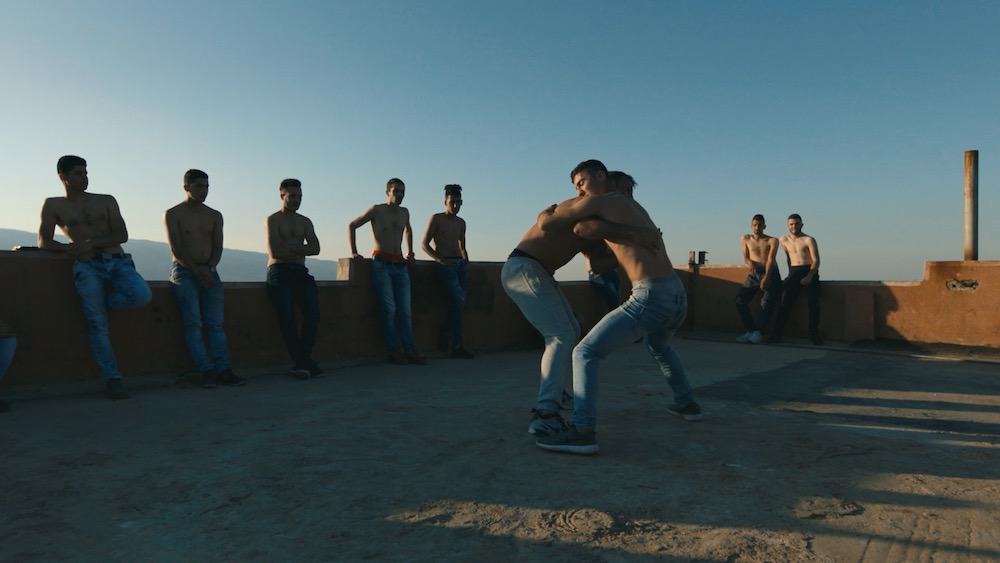 Both “Heart of Sky” and “Embrace,” include passages examining groups of men (soldiers, wrestlers) and their behavior together, alone. As a woman director, can you describe how you approached the depiction of these moments, which typically would take place out of sight of women? Are there specific aspects of masculinity that are you attempting to examine in these shots?

I don’t think it’s necessarily me, as a woman, examining masculinity; it’s more about me as a director examining aspects of humanity. In “Heart Of Sky,” it was about the sense of community and the faith in each other, while in “Embrace,” it’s about human intimacy vs. militarism and brutality.

Do you feel that, as a Lebanese director, you bring a unique perspective to the onscreen depiction of specifically Lebanese stories?

Probably, yes. I have been living here almost all my life. I know the culture, I am part of it. There are a lot of stories to be told.

Last year, we published an interview with you around the stunning music video you shot for Mashrou’ Leila’s “Roman”. How do you approach the relationship between film and music, across each of these videos?

It’s more like themes or stories that I am obsessed with: when the track comes in, if there is a possibility to match the subject with the song, I go for it. Directing films/music videos has been a great opportunity and tool for me to dig deeper into the themes that I am curious about. It’s a way of reaching and hearing other people’s stories that push me to do more films – or sometimes, just to keep them for me and nourish me as human. 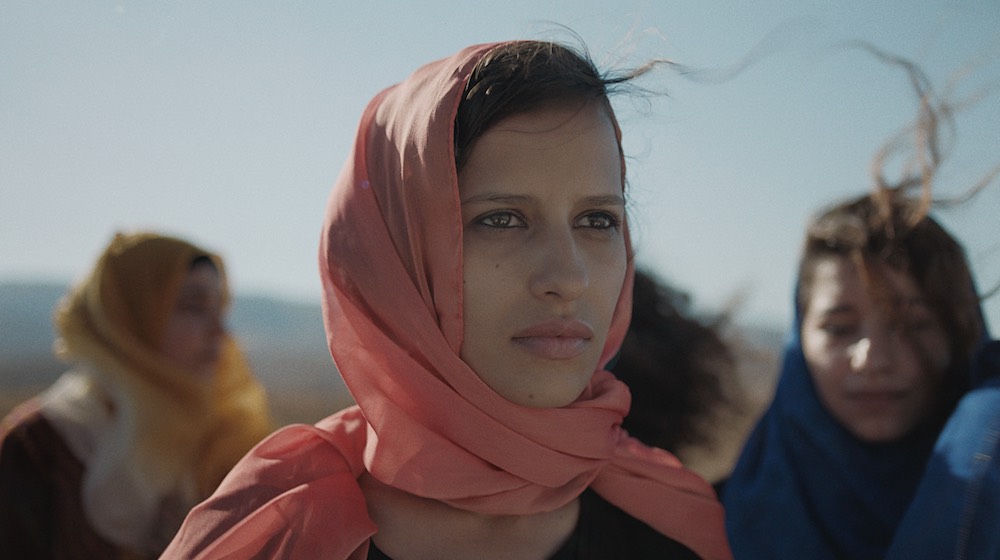 Since our coverage, “Roman” was included in this year’s Saatchi & Saatchi New Directors’ Showcase and was awarded at the 2018 Young Director Awards. How has it felt to see your work receive these prestigious accolades?

I feel grateful. Having international recognition makes me feel like I may be on the right track, and gives me a chance to get more opportunities to create more films 🙂

What’s next on the horizon for you?

I started writing my feature last summer. I want characters to talk in the film: dialogue, something more intimate. My instinct is pushing me toward that now.

Free The Bid is committed to diversifying production and providing opportunities for all women to excel. What do you think the advertising, film, and TV worlds stand to gain from considering more authentically diverse perspectives?

What advice would you give women who are interested in following in your career footsteps?

Never take no for an answer, and if they think you are crazy, that means you are making the right film.