Home > Archive > ON GETTING SIGNED, WITH JAVA JACOBS

ON GETTING SIGNED, WITH JAVA JACOBS 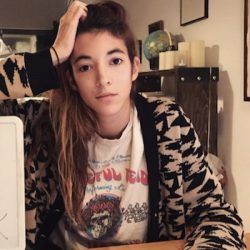 Java Jacobs is twenty-five, talented, and recently signed. Her story is unusual. After winning awards for a short film she made in school, Java invested the award money into making a spec commercial for Canal+ that went viral and, after airing during the Olympics, continues to air today! This experience jumpstarted her career, and we are excited to see what quirky and intelligent work comes from her this year. In the meantime, watch her commercial and short film here.
Read on to hear more about her process in our Q&A with Java Jacobs:

1. How did your short film come about in school? How does it tie into your commercial spots (is there a thread)? How did going to school influence your work?

I wrote my short film “Take A deep Breath” when I was 19 and always wanted to shoot it. I thought making it as my thesis film was the perfect opportunity. I love absurdity mixed with psychology mixed with comedy. “Being in love” with someone is such a weird concept when you think about it, I wanted to explore the subject a little bit more deeply.

My school (The School of Visual Arts) has been a great influence on my work. I met some incredible teachers, mentors. I will always recommend young filmmakers going to school if they can, it shaped my work and made me more confident.

You also get to learn every roles on set which I think makes you more aware as a director.

2. What inspired to make your first spec spot and how did you pitch it to Canal+?

I’m a big sports fan (watching, not playing!) I was born in a soccer religious family… huge PSG fan.

I got the idea to make a commercial for them so I wrote something, used the little money I won from awards I received for my short film and shot the ad in Paris pretty fast. A lot of favors pulled and the struggle was real but we made it happen!

The moment I released the film online, the ad went viral and got picked up by renowned French magazines. Canal+ contacted me and told me they were interested in picking it up!

My commercial aired prime time during the Olympics this summer and is still airing today. It was so incredible seeing it on TV for the first time!

3. What do you like about the craft of making commercial work?

I’ve very inspired by old commercial directors, especially from North Europe.  Johan Gulbranson, Roy Anderson… I’m part of the new generation but not really into new technology when it comes to filmmaking, I’m a bit old school.  My father had an advertising production company in Paris for a very long time, so I’ve been studying commercials my whole life, and it’s pretty fascinating.

Telling a story is such a short amount of time is a challenge. It’s an exciting process.

I also love working on something very intensely for a month, then move on to another project!

4. What was within the process of getting signed for you?

I started emailing and meeting with producers. I was looking to be more stable and take the next step in my career.  It was very interesting meeting with different producers, witnessing different atmospheres and different ways producers work in this business. As a young woman filmmaker, the process is quite difficult to find a producer who would trust and invest in you.

Ultimately I met with Robert Herman from Ruffian and I instantly connected with him.  He’s from England so the French in me instantly felt at ease. We’re both very excited to work together.

I then met with Ben Sharpe from Blink London through  Ruffian. Blink is an institution and I’m thrilled to be represented within the UK market,  I find British sense of humor bloody brilliant.