The prospect of finding pathways into a directorial career can be daunting – a lot of aspiring filmmakers aren’t given access to information or resources that could help them break into the film, TV, or advertising industries.

Director Danielle Boyd, a former Free The Bid team member who is currently working for production company Little Minx, is in the midst of navigating these initial stages of her career. Danielle’s NYU thesis film, The Princess and The Pea, is currently screening as part of the Festival de Cannes Short Film Corner, an opportunity that came about through the Creative Minds Group. This program aims to introduce young aspiring filmmakers to the industry by providing opportunities to participate in prestigious festivals. Danielle’s film is a glimpse into a family’s blurred relationship between fantasy and reality, and is an auspicious start to her burgeoning career as a director and writer.

Danielle Morgan Boyd is a writer/director based in LA. She is a graduate of NYU Tisch, majoring in Film and Television and minoring in Business Entertainment. Inspired at an early age by the expressive presence of the likes of Maya Angelou, Danielle felt the importance of sharing her perspective and experiences through films, poems and books. For Danielle, films make stories real, transforming them into a living, breathing piece of art that have the power to affect the world.

We spoke with Danielle about her initial discovery of her interest in film, capitalizing on the momentum of her career, and crafting a community with Free The Bid! 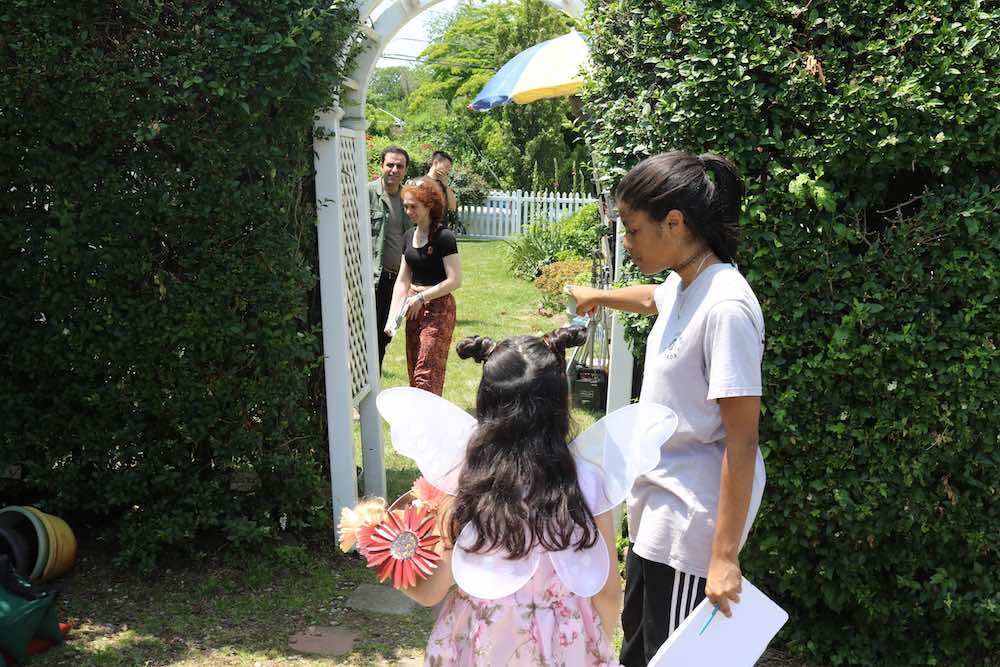 Since you’re an alumni member of the Free The Bid team, can you talk about how you initially were introduced to us and began working on the mission?

I first moved out here late September and I was supposed to work at a hotel as my backup. Right before moving, I came across the LA Music Video Festival, which was accepting submissions at the time, and I figured that it would be a good change I could give myself when coming here. All I had really finished at the time was this music video I had completed in early April. About two weeks before arriving, I got the news that they’d be screening my music video early October. I was so excited because I’d never been accepted to be part of a festival before, and it just seemed to me the perfect start to my new career in LA.

The first or second day that I went, Free The Bid was speaking on the panel and it was so incredible to me. I knew that female directors were scarce, but when they spoke the numbers I was honestly shocked. Still, I was happy that they were actually doing something about it rather just trying to raise awareness.

After the screening, I got the great opportunity to meet executive director, Emma Reeves, who introduced me to Chloe and eventually the Free The Bid family. I had still been searching desperately for a job and Free The Bid gave me a chance. The rest is history!

How did working with Free The Bid help you grow & expand on knowledge relevant to your career as a director? Was there anything that you took away from the experience?

Free The Bid truly expanded my knowledge of the commercial world. In school, it was never explained to me how the bidding process worked. Free The Bid also helped me get a clearer idea of where I fell in the industry as an African American female. While working, I studied a lot of these successful women’s directing styles and careers. I was able to study how to properly present my work and myself as a director, as well as learned about several production companies all over the world. For me, my favorite part was getting to watch and study the directors’ work and the consistency of it all. I got to get a clearer idea of what level of work you need to get signed or book jobs. It made me excited to work more on my personal vision as a director.

From the experience, I took a lot of positivity knowing that there was a change happening with powerful, determined individuals pushing it forward into the future. I was thankful, excited, and more educated about being a female director in this industry than before. 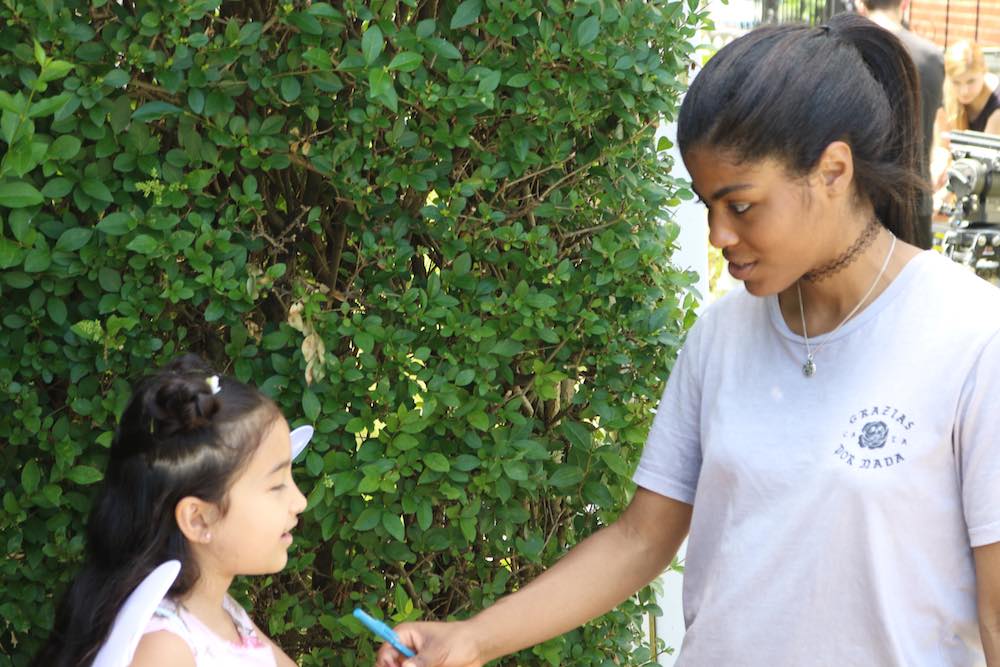 What initially motivated your interest in directing?

I’ve loved writing since second grade and I was passionate about that, initially studying the career of the late Maya Angelou, who was a creative polymath. I watched films extensively through childhood, but never thought anything about what vision was behind them. I just found so much happiness being consumed in foreign ideas and stories that came from watching films with mesmerizing scripts. In middle school, I got a Flip video camera for Christmas and I couldn’t stop creating films with my sister and god-sister. I was so excited when any class would give us the option of a film project and realized just how serious I took it.

My first summer of high school, I took a train to a film summer camp two hours each day just to attend. At that point, my mom realized how serious I was. With film, I wouldn’t just have a job, but a rewarding career.

What challenges have you encountered in the pursuit of your desired career path?

I’d say a lot of challenges were personal. Being a artist requires so much exposure and I still get nervous to present my ideas or stories. Financially, it is also a struggle, which is why there are so many directors out there who choose another industry. It’s tough when you have to maintain your living and at the same time as build a career. But don’t get me wrong, it can and has been done. I’ve seen it firsthand from Free The Bid, which really gave me confidence. It’s definitely a lot of patience, that I’ve had to develop.

I have to balance my passions while still being practical in the sense that right now I need to also make a living. It’s a lot of faith, persistence, and focus that I need to maintain. 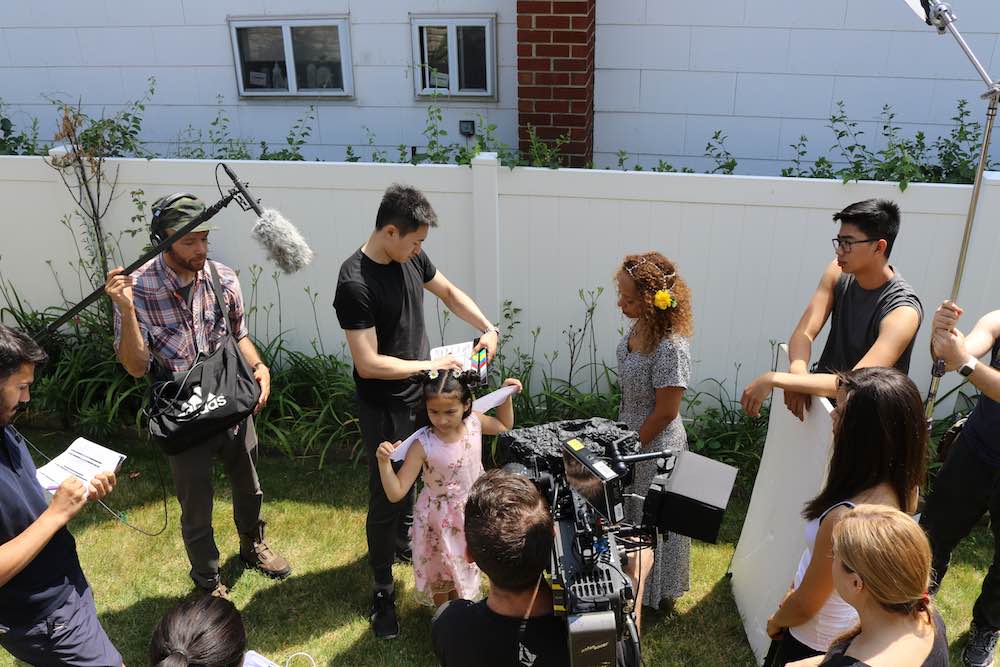 You studied Film at NYU, the program in which you created your “Princess and the Pea,” short film as a thesis. Can you talk about your journey to studying at NYU? How would you describe your experience in the program to any younger aspiring directors looking to study film in undergrad?

NYU was a huge blessing for me, it really changed my life because it brought me to New York. I felt while studying there I was accumulating two educations, which really suited me well when I graduated. What I loved about NYU was that everything was hands-on and nothing was simple. Every assignment was a challenge, and it definitely brought the best out of me and gave me some grit. Throughout my four years, I spent time developing myself as an artist, not just a filmmaker, which is what I appreciated the most. A lot of the program focuses on bringing out your artistry first and then honing your skills to present your art. This is invaluable, because some artists don’t even realize what their identity is, so they spend so much time chasing other ideas that excite them rather than listening to their inner voice. It’s so easy to get distracted, and NYU keeps you focused within, which is what I loved most.

I would describe my experience as a positive challenge, it worked for me and I believe it has the potential to help a lot of artists give themselves a chance first before anyone else does.

Tell us about “The Princess And The Pea” – what sparked the original idea?

So, this film came to me at 4am one morning (not kidding). I had written another script for my Senior Thesis class, and I realized after writing the treatment and pitching it to my teacher that it would serve better as a feature. So I put it aside and tried to think of another story I’d love to develop. Since youth, I’ve been inspired by fairy tales, distorted realities, and how distorted realities are dealt with in the real world, especially when it involves kids who are all assumed to need that guidance.

In essence, one of the fundamental themes in the story is how everyone thinks their way works best and sometimes neither are right. This was an idea that was definitely on my mind at the time. My mother always let my imagination run wild as a kid, whereas my dad was more of a realist. I think their dynamic definitely helped shape part of the story and make it more authentic. 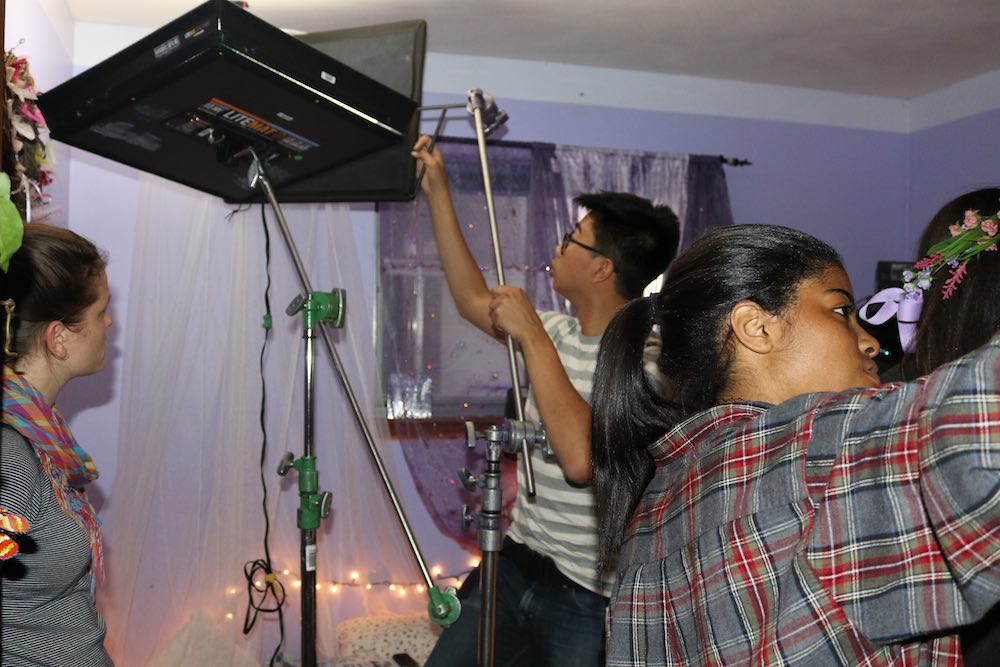 What was the process of working on the short film like?

It was really stressful at times, but such a rewarding experience. I loved watching the story develop, the actors develop, and the shoot day come to fruition. It was a big challenge for me, and I felt grateful for all the great people who helped make it happen.

What challenges did  you encounter with the work, and what are some elements of the final film that you are happiest with?

Overall, I’m really happy with the beautiful shots and the editing we were able to make work. 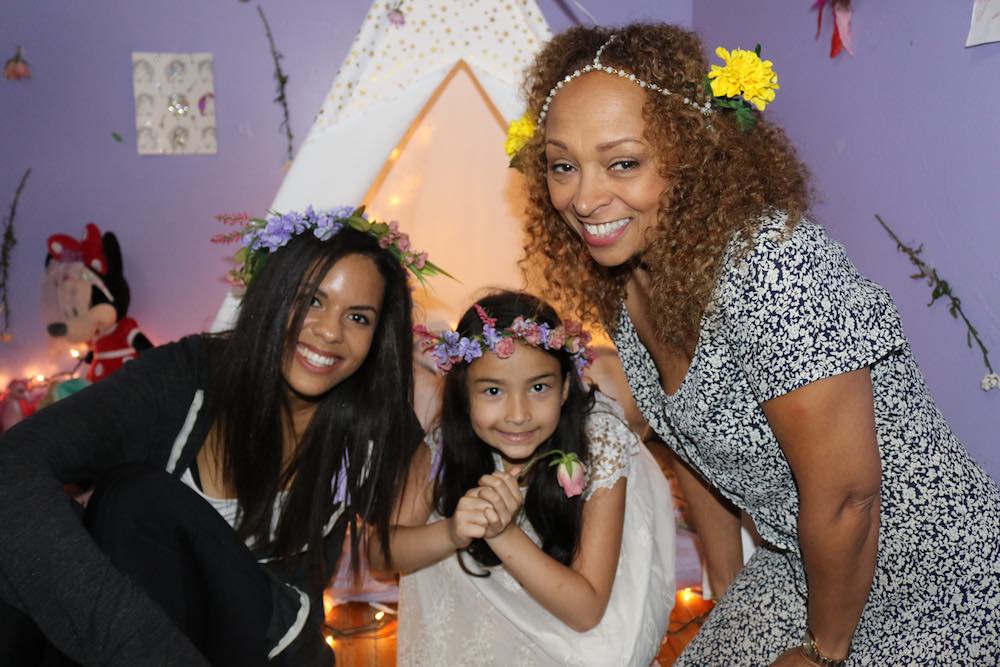 The Creative Minds Group is a program that works to introduce and educate aspiring filmmakers, producers, and agents or others about the way the industry works (specifically in the film festival circuit). It’s great because a lot goes on at the film festivals, and you can experience people at their high points in their career. You are exposed to behind the scenes of the festival goers, production companies, and filmmakers trying to sell their short.

You can do internships, shoot projects at the festivals, help coordinate the festival, and if you’re an alumni, apply to sell/feature your short within the program. I first attend the Creative Minds program in 2015 for the Berlinale International Film Festival, where I interned for Voltage Pictures in the sales and acquisitions sector. It was really great for me to experience the European Film Market (EFM) and see how wide the industry really is.

What are the benefits to participating in Creative Minds and similar programs as an up and coming filmmaker?

The exposure is invaluable – you get to witness the industry firsthand and it helps you be more aware of what you’re walking into, in a sense. Additionally, it helped me feel more confident with the experience and I truly believe it helped me land other internships/jobs in the industry easier. Then you build a family with some people you meet from all around the world. I have a good friend who I’ve been close with ever since, and she lives in Germany and will eventually move here most likely. The connections are invaluable. 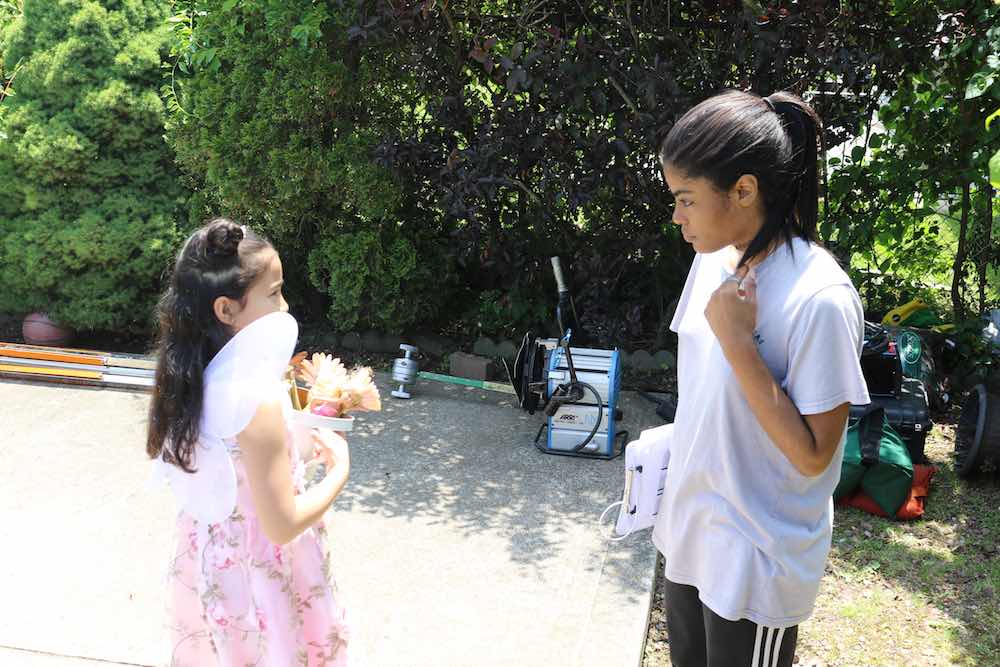 What’s next for you and your work?

Next, I’m hoping to work on a super short film series that I started a few years ago, hopefully get a few music videos done, and polish up some screenplays. I’m really determined to utilize any extra time I have, and hone my skills by practicing every day as much as possible. While going to Cannes is great, I see it more as a wake up call that I have a long way to go, and I really want to keep up the momentum.

What advice would you give other young directors coming to the film industry from a similar background and hoping to break in?

My advice would be that you must believe in yourself because no one else will until you do. You can’t lead a team and not have that faith that you know what you’re doing. People will pick up on it if you don’t. When the time comes, be ready to step up, you CAN do it! 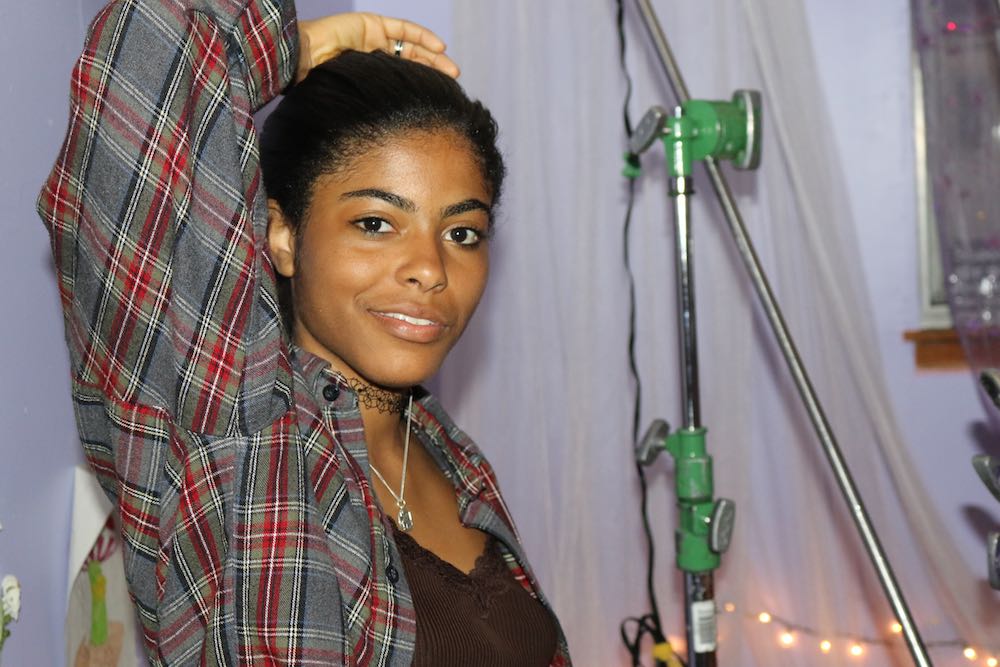 In Memory of Mark Boyd