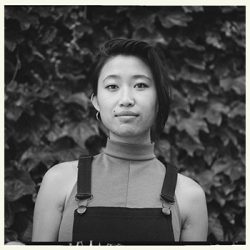 June is Pride Month, and it’s a perfect time to showcase the beautiful work of Daisy Zhou, whose videos for Nike, featuring transgender vogue dancer Leiomy Maldonado, have been garnering quite a bit of attention for the young director.

Growing up between Shanghai and rural Pennsylvania, the one constant Daisy had in her life was photography & filmmaking. Daisy has shot commercial projects for Lincoln, Chanel, and Victoria’s Secret, as well as music videos, fashion films and documentaries for artists including Margaret Zhang, Banks, Mykki Blanco, Cai Guo Qiang, and James Blunt. She is signed with Public Record and based in NY.

We had the opportunity to speak to Daisy about her life, her work, and her future projects! Check out our interview with her below.

You grew up between Shanghai and the US. Did having a childhood between two such different places influence the work you do today?

It sounds cliche- but I think feeling like an outsider is connected to the desire to create art. Switching between American rural suburbs and a city like Shanghai taught me to adapt to many social-cultural scenarios that were thrown at me- but it had also taken away a concept of “home” and “identity” which for a long time I tried to define.  In a big way- my work reflects this process. I am always trying to articulate where I am in the strange and and deep differences between east and west. I tend to write about and be drawn to people who similarly find themselves in an intersection between two different worlds.

As a writer/director, one of my first shorts, “How To Be A Black Panther”- a small, but deeply personal & special film for me. As a DP, I am still quite infatuated with director Zorinah Juan Lieber’s  narrative short “The Second Province” about two filipino siblings’ fight to save their mother’s terminal life from euthanasia. It’s visual boldness was so satisfying for me to shoot & Lieber’s writing and tenderness towards her characters are a DP’s dream.

What was it like working for Nike? How did that opportunity come about?

About a year ago to date, I took it upon myself to make a spec Nike commercial on a Voguer named Omari Mizrahi. This video was passed around sporadically for a few weeks and caught the attention of Rudah Ribiero at Nike NYC, who at the time was heading Nike’s Be True campaign and had wanted to do a video on Voguing in time for Pride. It was so reassuring and gratifying to work with the Nike NYC team who truly trusted my vision and believed that the project was something special. I felt like Rudah and his team especially emphasized how important it was to take this opportunity to make a statement for the community, rather than sell a product, which I tried my best to live by for this spot.

Your videos of queer and trans vogue performers, including Leiomy Maldonado, are gorgeously shot. What drew you to capturing these communities?

I am drawn to people who define themselves on their own terms.  When I watched the documentary Paris Is Burning by Jennie Livingston a few years ago, I was deeply moved. I felt like I had something to aspire to- I wanted to create with the same love of life, energy and passion that ballroom community had created for themselves in that documentary. This creation was lived through dance, a dance that was powerful, feminine, subversive, and glamorous. This to me was everything.

Are there any upcoming exciting projects we can look forward to from you?

I am going to Brazil very soon to DP a beautiful short film about two girls recovering from anorexia that fall in love with a very talented female director.

Free The Bid is committed to advocating for diverse perspectives and points of view. What do you think are some of the benefits to diverse representation on both sides of the camera?

On a very personal level, diversity allows the idea that I, as an Asian-American woman, have real agency in this world. To be honest, if I wasn’t living in an age where the topic of diversity seemed urgent and relevant, I’m not sure where I would be in my life. On a macro scale I see diversity as a pathway to economic and artistic power for misrepresented and underrepresented groups- and on the other, it imagines a world where YOU- whoever you might be, is relevant and important in this world.  I cannot express enough how important this confidence is on the youth, who look to films, tv, music to find themselves.

Any advice for anyone pursuing a career as a director?

In my very humble experience: I would pay close attention to what fascinates you, the people who support you creatively, and the amount of rest you get.