What is the state of the American Dream in 2018, when the USA is more diverse, yet in many ways more divided-feeling than ever before? What does it mean, on an individual basis, to thrive in America, and how can we bridge the gaps between our experience to see eye-to-eye with one another?

Armed with a camera and a hard-working crew, director Christine Yuan set out across the country to capture a wide variety of unique American experiences for Pabst and Vice+ Productions‘ “America Dreaming” series. Through her lens, the country is depicted in its depth and wealth of cultures, from indigenous healers to drag performers. Christine’s film is a hopeful portrayal of what makes us specific and what common threads ultimately unite our experiences.

Christine shared her thoughts on shooting in multiple film formats, haunted hotel rooms, and the need for inclusive representation across all production roles. 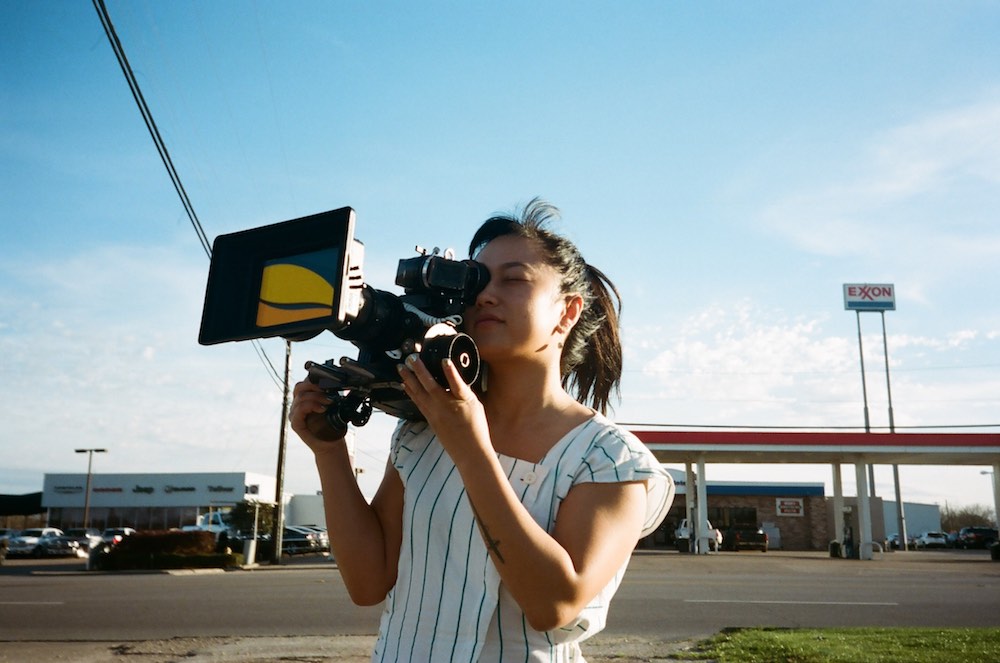 How did the opportunity to work on this series with Vice and Pabst come about?

Vice reached out to me to pitch on this project. The topic provoked a lot of thought in me and I used the treatment as an opportunity to explore and engage with them to continue the conversation.

What excites you most about tackling the project? How did the theme of exploring American freedoms resonate on a personal level with you?

I’m always excited by stories that revolve around identity. My parents immigrated to the States from Taiwan in the 80’s. I was born in the States and never really thought about that choice since it wasn’t mine to make. Exploring this topic reconnected me not only to my own journey, but that of my parents. What does it mean now for someone to come to America, or someone who’s grown up here and identifies as American? I was excited to meet people we could explore these conversations with. 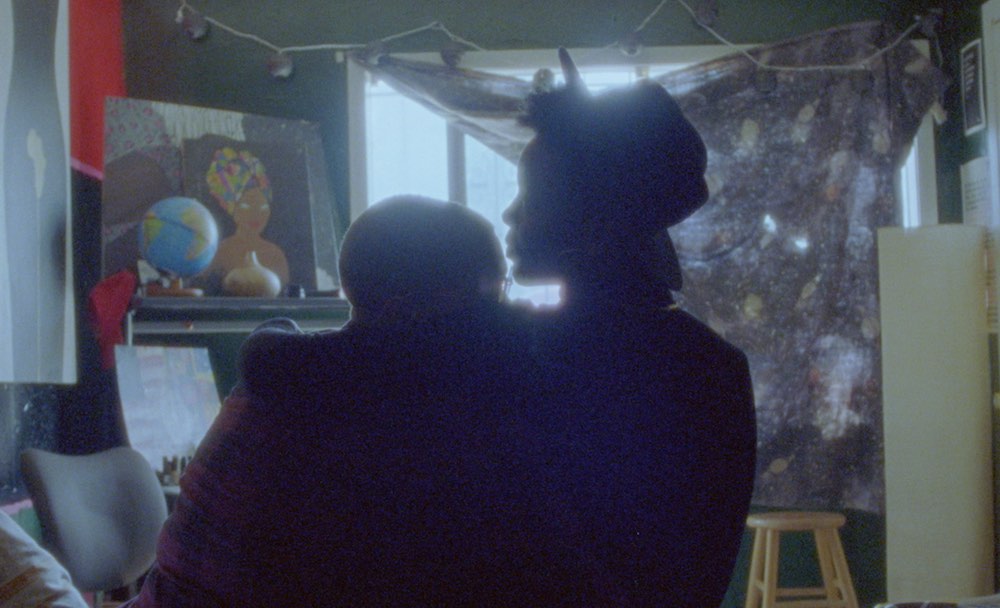 What was the process of choosing your subjects?

We had an amazing casting assistant Karely Perez-Cruz help us during the casting process. Karely, our producer Amanda Naseem, creative director Straith Schreder, and I did nearly a hundred Skype interviews with people we thought would be good for this project. We aimed to give a platform for stories and individuals who are engaged with community and come from a diverse background of experiences. On a personal level, I really wanted to feature an Indigenous voice, and we ended up meeting Eutemia in Denver, who is an Indigenous healer and wonder woman that I’m so happy to know. We also met with Farmer Mai, who is a badass Vietnamese farmer up in Sonoma County. Her sustainability projects and efforts in protecting ethnic crops is something I really respect and align with. Google her!

Tell us about how you developed trust and intimacy with the subjects you filmed, and your strategy for capturing the depth of insight you were able to depict.

Doing multiple Skype calls with our subjects beforehand really helps break the ice. When you meet in person it feels like you’re old friends already. The key is to make people feel comfortable. They aren’t actors, but real people who aren’t used to being in front of the camera. So how do you make them forget the camera is there? You engage with them with intention and attention. When we’re talking together in an interview, I feel like we’re the only ones there. I give them my undivided attention and make sure my crew is doing the same.

The look of the series is very distinctively grainy and filmic – was this project shot on film? What was your vision for the film’s aesthetic, and can you walk us through the choices you made, on a technical level, in shooting to achieve the desired look?

One of the most special things about this project was being able to shoot on multiple film formats including 16MM, 35MM, and Super 8. Our cinematographer Matthew Ballard has an unmatched level of taste and artistry that really elevated this entire project. It was a treat working with him and working with film. Our shooting approach was to shoot digital for the interviews, 16mm for verite moments, and 35mm for portraits, saving Super 8 for textural moments while we were on the road. 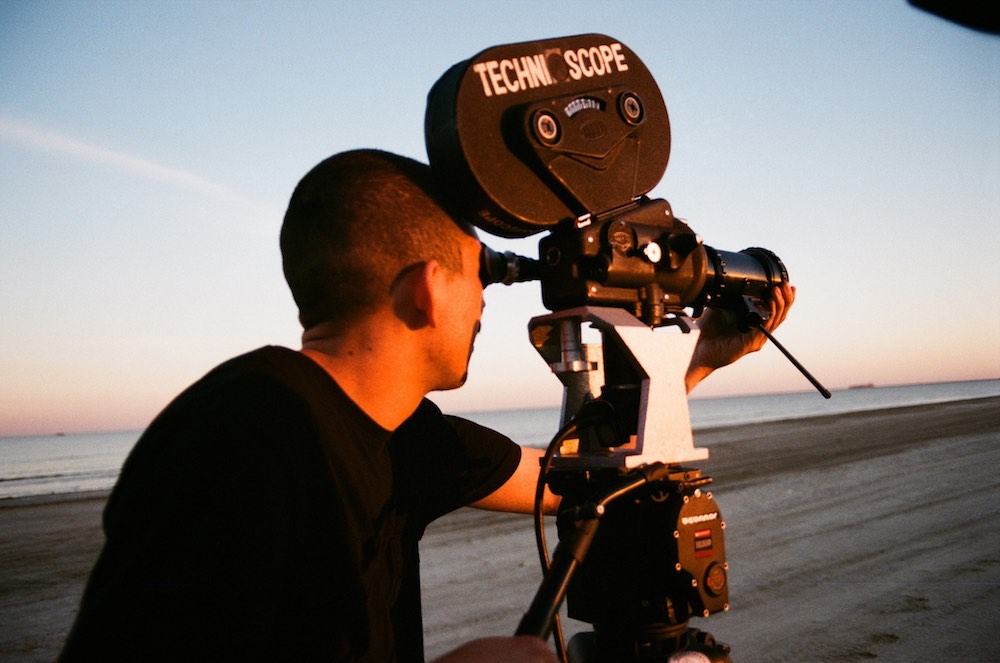 What was so special about this project was being able to shoot on film formats including 16mm, 35mm, and super 8.

How long were you shooting the footage for this series? Where were the locations that you shot?

We were on the road for two weeks and shot in Texas, Colorado, and California. We hit Dallas, Houston, Galveston (must go back), Denver, Colorado Springs, Los Angeles, San Francisco, and Sonoma.

What were some of the biggest challenges that you encountered while shooting? How did you troubleshoot and find solutions as a director?

Ha! It all seems impossible until it’s done. Halfway through production, we had a producer get sick, we lost a location, a van crashed, the list goes on. You find solutions by being flexible and adaptive and if you’re lucky, what results is better than your original idea. When we lost a location, we found an even better one which was the bowling alley with the rotating disco ball. Our amazing production manager Amalia Bradstreet who was in NYC as we were shooting in LA found that location the day before. Learning to lean on your team and work together for a common goal is what gets you through it.

What were some highlights of your experience working with Vice, who have taken the Free The Bid pledge?

This has been one of the funnest, most rewarding production experiences I’ve ever had. The team had unbeatable chemistry that made this quite literally a dream team for me. Some of the highlights are the little things – the experiences we had with each other on the road like stopping to photograph a monster truck and an abandoned carnival, or all the meals we had together like Whataburger at midnight in Galveston after we wrapped, checking into hotels I thought were haunted and texting Straith in the room next to me like, “Did you feel that too?” Everyone was not only killing it at their jobs, they were cool ass down ass people that I loved spending time with also. 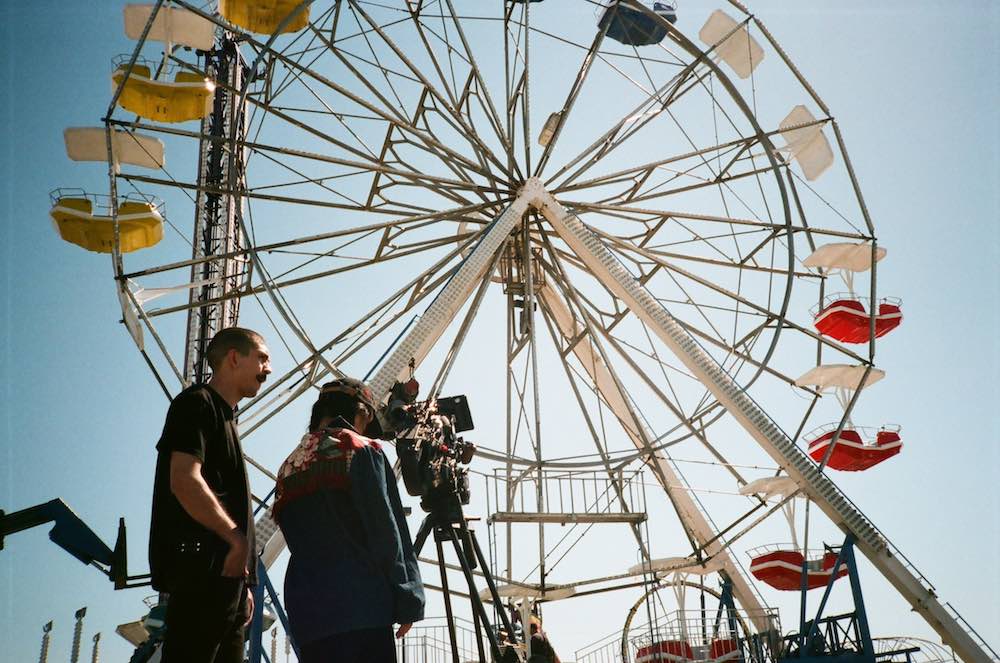 How does this project fit within the scope of your body of work? Did it push your work in any new directions?

I have a personal interest in culture and identity, so this project really fit a larger theme for me with the work that I do. Visually, we were able to push boundaries by being able to shoot on film. Our shooting approach became more controlled and calculated since we only had so much film to work with which in the end, really helped us in the edit. Although this was a documentary, I approached this like a narrative by conceptualizing scenes and locations beforehand that our subjects could “play” in. 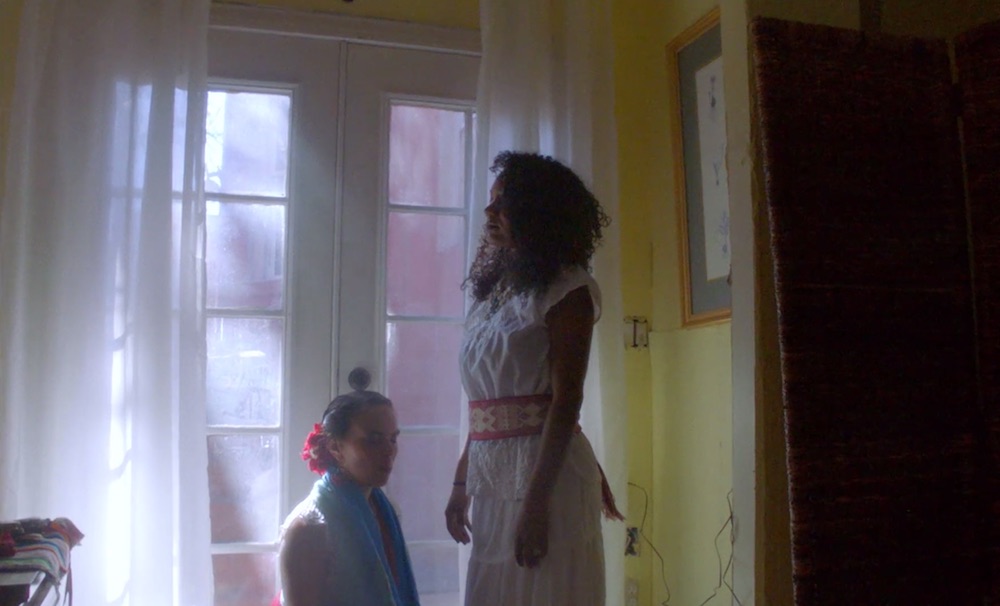 Tell us about how you initially got your start as a director. Was directing always the goal for you?

I went to film school at UCLA and started directing from there. Quite honestly, I never thought I’d be doing what I do now. I was an art kid, a kid who wanted to see her photographs move. I found that dream come true with filmmaking.

You were selected as part of last year’s SHOOT New Directors’ Showcase. Can you talk about the experience of participating in the screening, and what difference it made in terms of your career.

The showcase was awesome to be part of. It’s always helpful to have your work screen at events to broaden the scope of who it reaches. The showcase as a physical event is exciting too since so much of what people watch now is alone on a laptop. To be able to gather with community and watch our work together is a special experience. 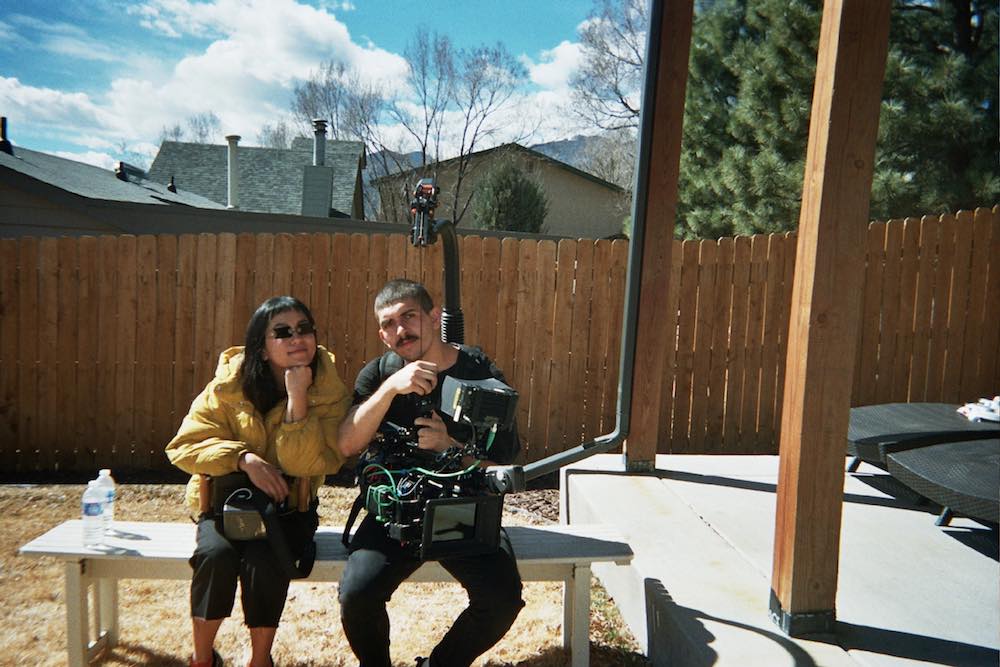 What are some of the most exciting recent projects that you’ve completed? What’s on the horizon for you?

I’ve just wrapped a commercial I shot in Ireland which was a lot of fun. Next, I am working on some personal projects, including developing a psychological drama series.

Who are some of the women in film/advertising that you most admire?

Liza Mandelup. She’s a friend I’m grateful to be walking this path with. She sticks to her guns, knows what she wants, and has a no bullshit attitude that inspires me.

It’s EVERYTHING. Without writers, there isn’t a director, there isn’t a cast, there isn’t a crew. We need diverse representation on every side in order to make sure the stories we tell represent the many diverse experiences in this world. For example, the project I’m working on now calls for Chinese American actors and there are only a HANDFUL of them to be found. Without real, unfiltered, unwatered down, un-white-washed versions of Chinese American stories that are written, funded, and supported, we don’t have a chance at equal representation. These are the opportunities I am fighting for.

What words of advice would you give to the next generation of women filmmakers?

Keep.making.shit. Don’t let anyone stand in your way, yourself included. 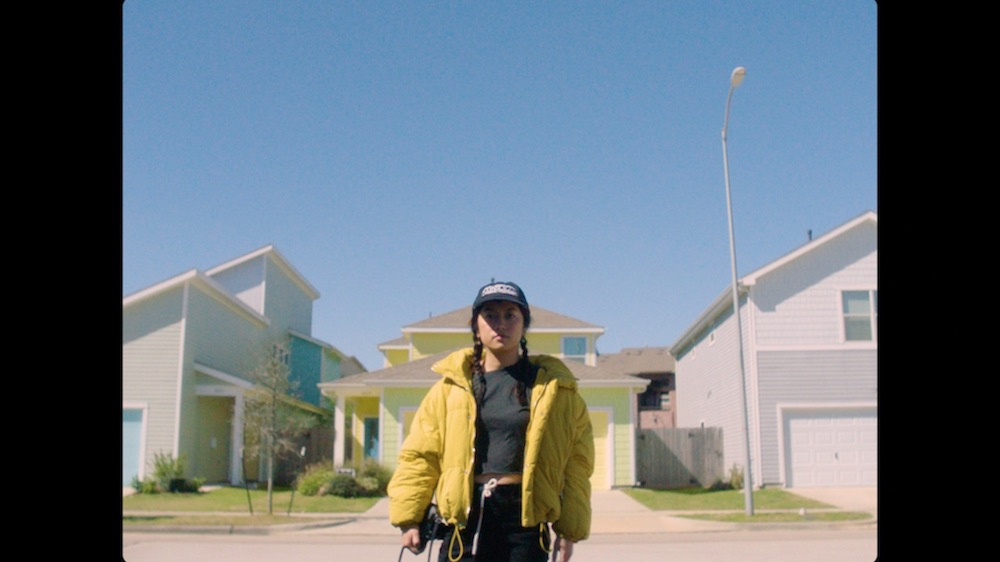