What do a florist, a ceramicist, a taffy-maker, and a boxer have in common? Each profession relies heavily on working with your hands, and there’s no reason those hands can’t be beautifully manicured while they work wonders.

Beauty brand Sally Hansen and pledged agency Anomaly tapped director Christelle de Castro to document four very different women at work, showcasing the beauty and power of their respective acts of manual labor. Every woman’s career shapes her life in unique ways, and the campaign shows the physicality and precision that each woman exhibits on a daily basis. It’s refreshing for beauty marketing to celebrate women as craftspeople, and Christelle’s directorial eye captures what makes each woman awe-inspiring.

Christelle de Castro is known for her iconic images of musicians, artists, and muses. Her love of portraiture and devotion to social justice sews a common thread throughout her personal & commercial work. Her photographs are uniquely intimate while her films explore themes of empowerment. Her SHOWstudio film “Open Up”, starring dance superstars Jonte Moaning, Mela Murder & Kaner Flex, was an Official Selection at the Milano Film Festival.

We spoke with Christelle about the importance of quick thinking to troubleshoot on set, creating distinct color worlds for her subjects, and rooting for other women to succeed. 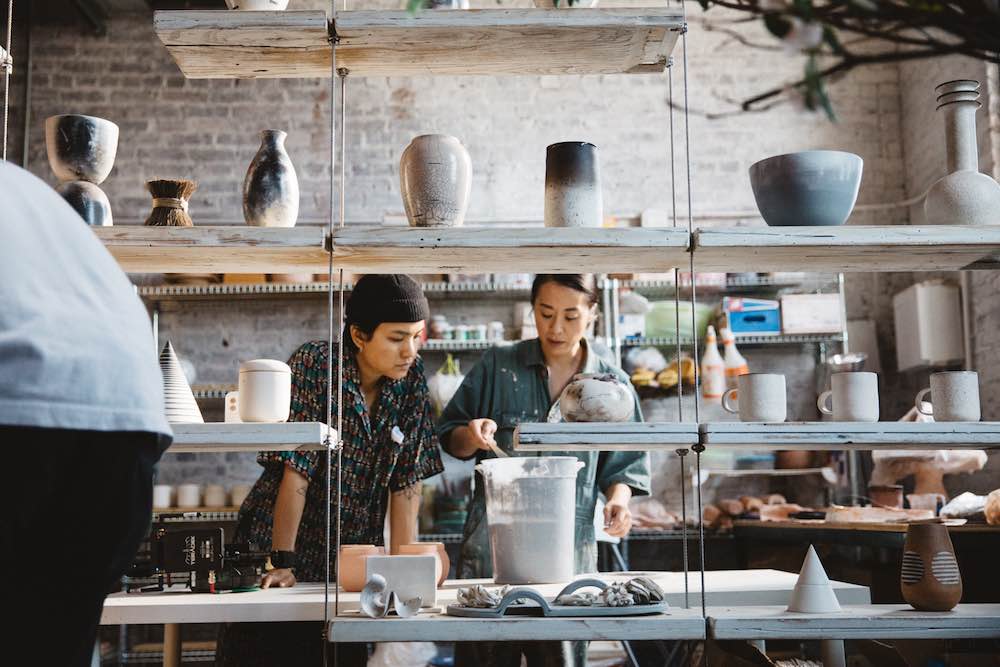 Your spots for Sally Hansen take a different approach to advertising beauty products than most. Can you discuss the initial brief with us and talk us through your process of landing the job?

Anomaly approached me with the concept of commercial spots featuring real working women who work with their hands for a living. In bidding for this job, I created a treatment I called, “Hands-On Women”. It featured women in my circles who are powerful professionals that rely on the strength of their hands to do what they do. It featured eyewear designers, a ceramicist, a hair stylist, a chef, a pastry chef, 2 musicians, and a carpenter. I think most ad agencies want to know you have a 360 understanding of what they are trying to achieve. The icing on the cake is when you can also supply them with a twist that is unique to your vision and your world.

How were the campaign’s subjects found/decided upon?

Casting is always a very complicated process between client, agency, and artist. We brought on a casting agent, Barbara Fister, to align with us & to deliver the client’s ideal picks. 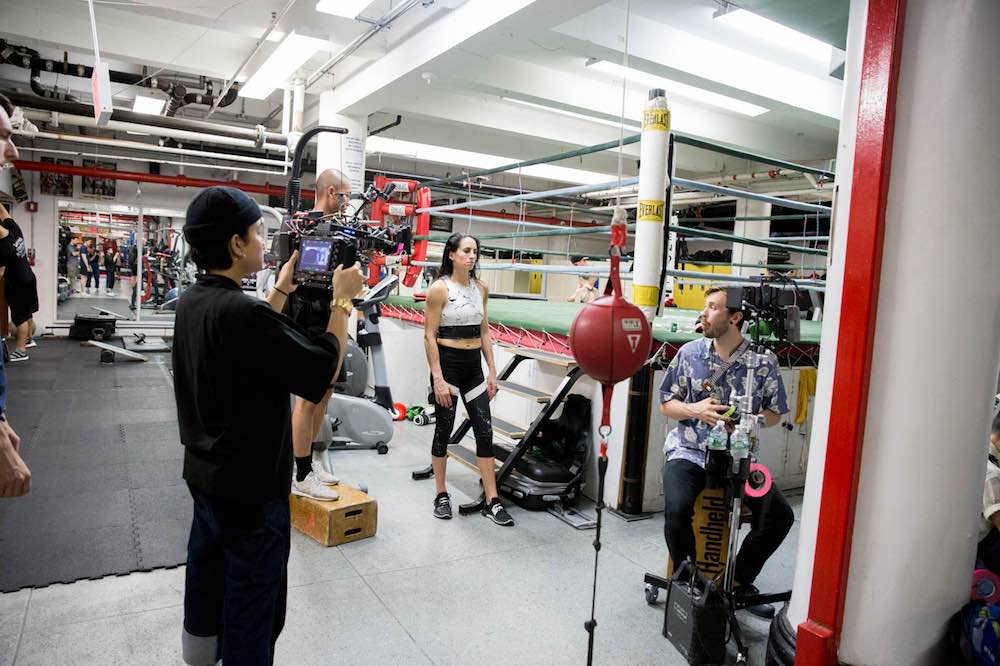 How did you approach the VO interviews? Do you have any strategies for making interview subjects comfortable?

The sound design on this project is something I am incredibly proud of! I interviewed each talent on set. My amazing sound designer, Kieran Kaye, built these run & gun (but brilliant!) echo-proof rooms in the different locations we shot in. Marissa’s interview was done in a spare room at Red Hook Labs (which was our location for beauty and styling). We were surrounded by rolling racks that were raised high and filled with clothes. The garments kept foreign noises out and absorbed any unwanted echoing during our convo. I interviewed our golden-gloves winning boxer Christina Cruz in a broom closet at Canoe Studios! Hahaha! So much about production is about quick thinking & problem solving. If the broom closet is going to give you the best sound quality, then by all means, that’s your sound booth! I joked with Kieran, “I’ve spent my adult life out of the closet and now you’re putting me back in it?!” Haha!

What kind of direction did you give the talent on set in order to capture your desired performances?

I gave the talent different scenarios to help them emote the body language and facial expressions we needed for the films. Because they are real working women and not actors, moving in front of the camera wasn’t always natural for them–which is completely understandable! Tabore, for instance, is such a sweetheart with a very upbeat personality. She has this smile that is absolutely infectious. Because she’s naturally a very smiley person, it was more difficult for her to express a stoic, at-work look. I kept saying, “You’re stressed out. You’re thinking about your deadlines. You’re totally behind.” She still had a hard time giving off a slight smile. So I’d have to take it to the next level and be like “Your mom is in the hospital. She’s in critical condition!” We were all laughing about it of course, but sometimes you’ve gotta paint different pictures for people to get the exact expressions you’re looking for. 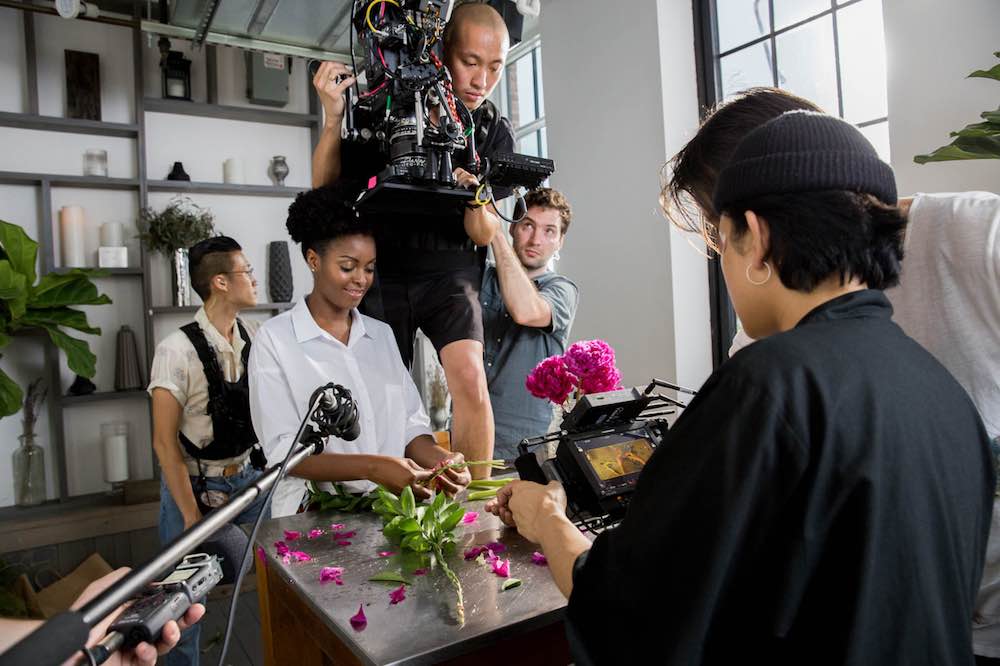 How did you go about crafting the look and feel of these spots? What were some of your visual ideas for the films?

The two big things for me were lighting and color treatments between the different spaces. You’ll notice Julianne (the ceramicist) has a very ethereal pinkish terracotta world, Christina (the boxer) has a very blue world, which exaggerates the idea of her being outnumbered in a very rough profession…it’s the antithesis of a warm environment. Marissa’s world (the taffy maker) is primarily green. I wanted to exaggerate the factory space by bringing out the fluorescents in that beautiful green, which we complemented with her red apron. Lastly, Tabore’s environment is sunny & golden, appropriate to her world working with plants & flowers. 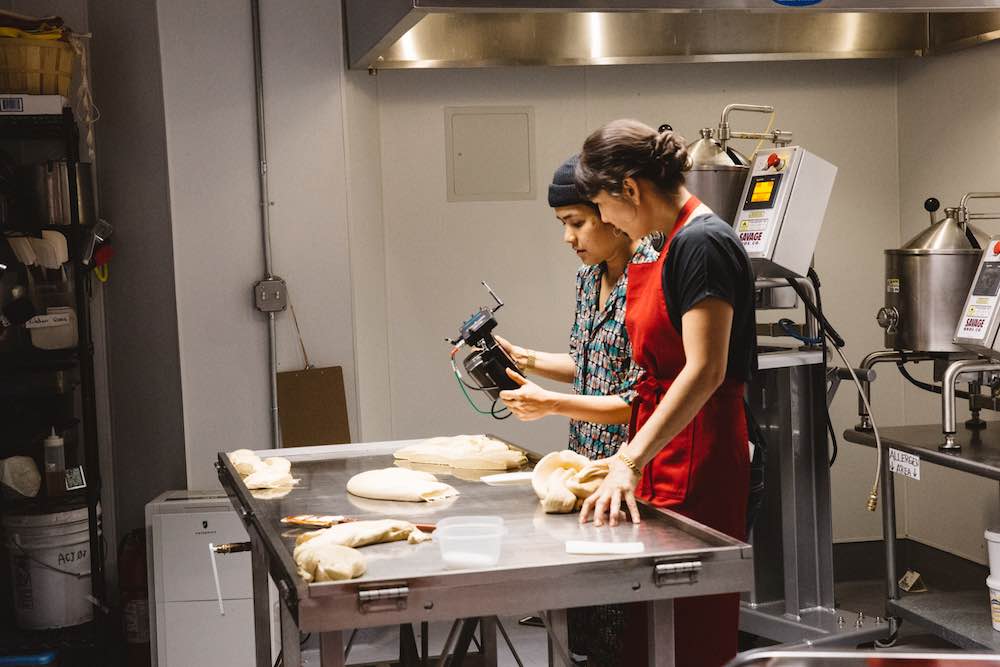 Did these spots allow you to use any new equipment or try out any unfamiliar techniques?

This was my first time shooting with an Alexa! My prior films were primarily shot on RED or with the Sony FS7.

What were some of your favorite moments on set?

Getting to meet and interview Julianne, Tabore, Christina & Marisa. They were all such rad, generous women. All boss women who were super down to earth. There was never a dull moment on set. I was constantly problem solving and thinking on my toes. I think I thrive on that. 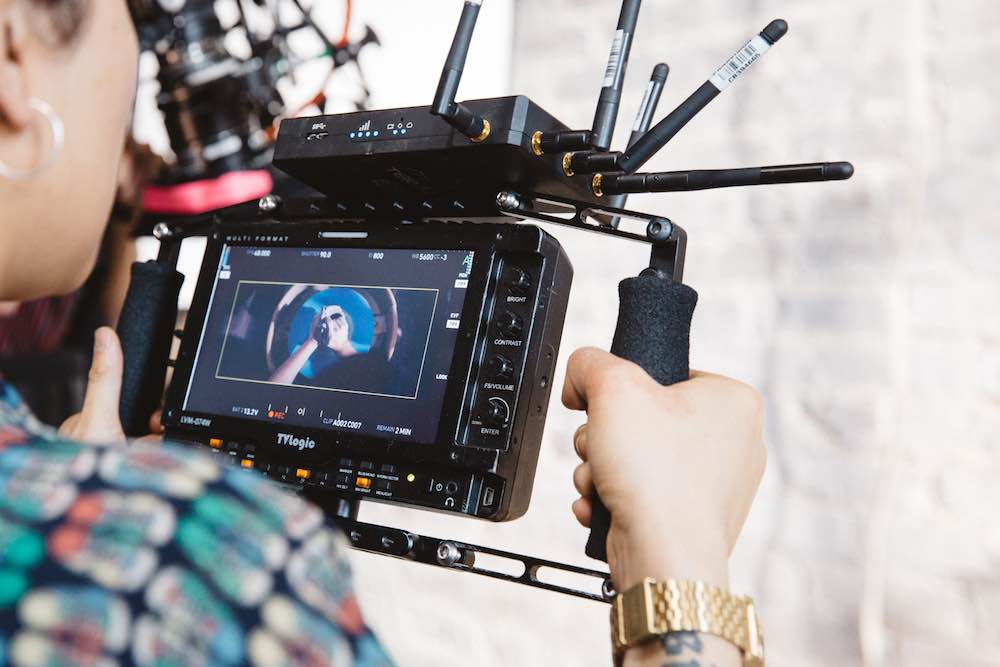 How did you get your start as a director? Was film always an interest of yours?

I got serious with video in high school. We had a video productions elective taught by Mr. Lacasse, our high school’s “coolest” teacher. Everyone took the elective because he was so laid back, you could get away with murder in that class. Most of the students didn’t apply themselves, but I did, and so he supported my projects, he let me borrow equipment, and even let me take a computer home for a summer (unbeknownst to the school) so that I could edit personal projects during break! At age 14, I knew this was my biggest passion and that I wanted to be a director. I stumbled into photography at age 19 while in college at San Francisco State. I made a friend who was studying to be a cinematographer at the Academy of Art. His name is Eigo Todoroki, and he was more than just a talented DP, he was an insanely strong photographer. He taught me how to use a 35mm camera. Prior to this, I was only thinking in the world of motion.

You’re a director who is also well known as a photographer – how do the two disciplines relate for you, and what are your favorite aspects of working in each?

I’ve acquired a keen sense of composition from my practice in photography. So when I’m directing, I’m very intentional with my framing. I also love to shoot with both film and digital in both spaces. When you look at my photo and motion work, I think a common thread you’ll find is texture, contrast, and a strong connection between the lens and subject.

What I love most about photography is how instant it is. It can be a personal practice that requires very little. I can take a portrait on my own, with minimal tools, and control the process from start to finish. It’s much harder for me to have a daily practice with motion. It’s a much more drawn out process with so many more moving parts.

Filmmaking requires a crew, far more equipment & a proper budget. Even the simplest of projects can cost an arm and a leg. Then post production: that’s a beast of its own. I tend to obsess over post because I love the process so much. That’s why I started Stoneman, my post production company and think tank. I’m involved with every aspect of post on my films, from the editing, the sound design, the coloring, and the graphics. So I’m typically buried in my film projects for weeks to months. 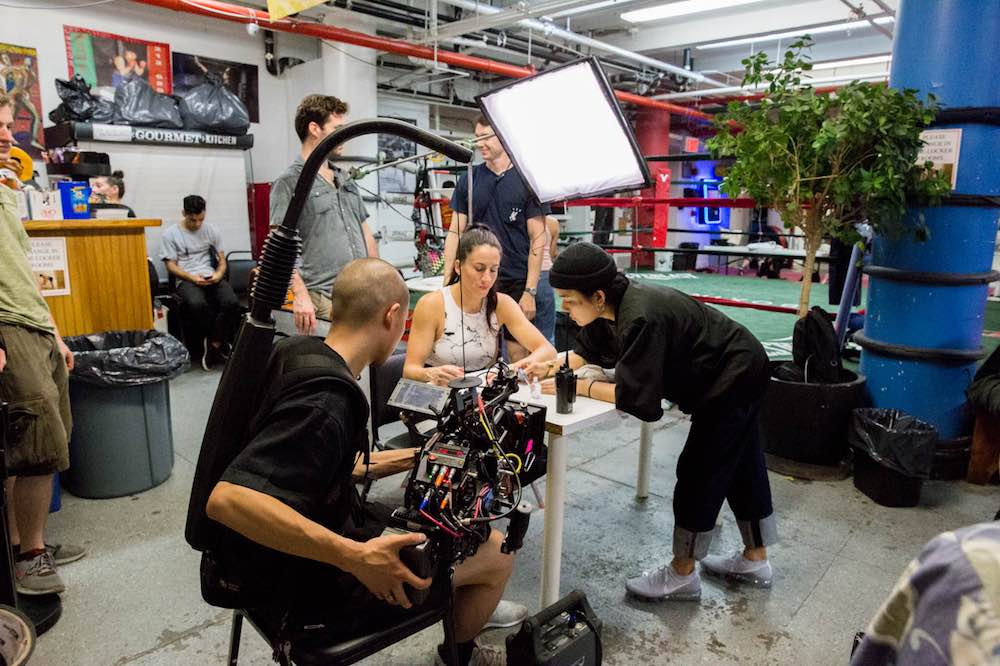 What are some of your career highlights, from a personal perspective?

To name a couple that stand out, I’d say:

2006 – After about two years of exhibiting my street photography in shows in SF, I landed my first solo exhibition at The Showroom NYC in New York City. I was fully self taught, so it was such a huge honor to be noticed & given a platform in that way.

And 2017 – I signed to LENS at IMG. It was such a surreal day, I left that meeting feeling GIDDY. I somehow managed to accomplish my 14yr old pipe dream! I couldn’t be more grateful to be with such an amazing family.

If you could have the opportunity to shoot any kind of commercial campaign, what would your ideal be? 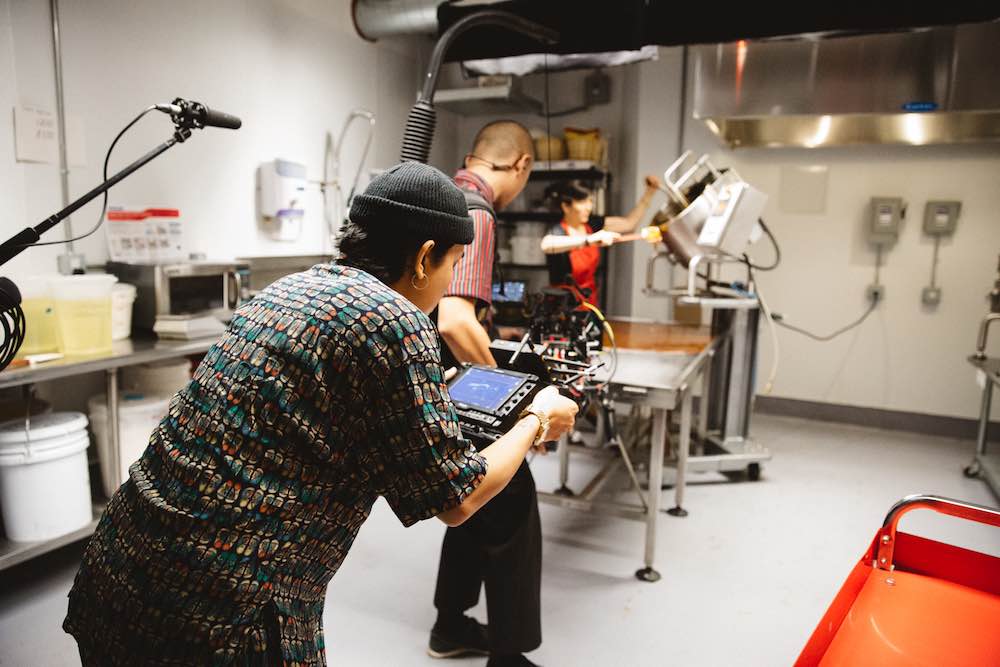 I think people are yearning to tell their own narratives. It’s not that I don’t ever want to hear stories told by straight white men, I’m simply bored of them being the primary messengers.

I was watching this Tina Fey interview on the new David Letterman show, where she talks about becoming SNL’s first female head writer. She remembers this sketch that her and another woman wrote – it was a commercial about tampons. Every week, the team would sort through everyone’s ideas and see which commercials they’d want to tape for the show. Their tampon sketch was read in front of the room and was immediately thrown out… You gotta remember, the writing team was majority men, so they couldn’t relate. Tina and her writing partner had to interject and say, “Hey wait a minute guys, this is actually HILARIOUS.” In the end, they were able to shoot the commercial, but it took them explaining the joke to people who didn’t experience periods, why the bit was funny. That would’ve been a huge missed opportunity for SNL’s female viewers! But that’s what happens when there is a lack of diversity in the workplace. We miss out on a very colorful world of different experiences, dramas, comedies, and points of views that are dying to be told.

Lastly, and this is very important: brands are likely to make offensive material if they are trying to appeal to an audience that don’t also staff and oversee the production. I’ll leave it at that. 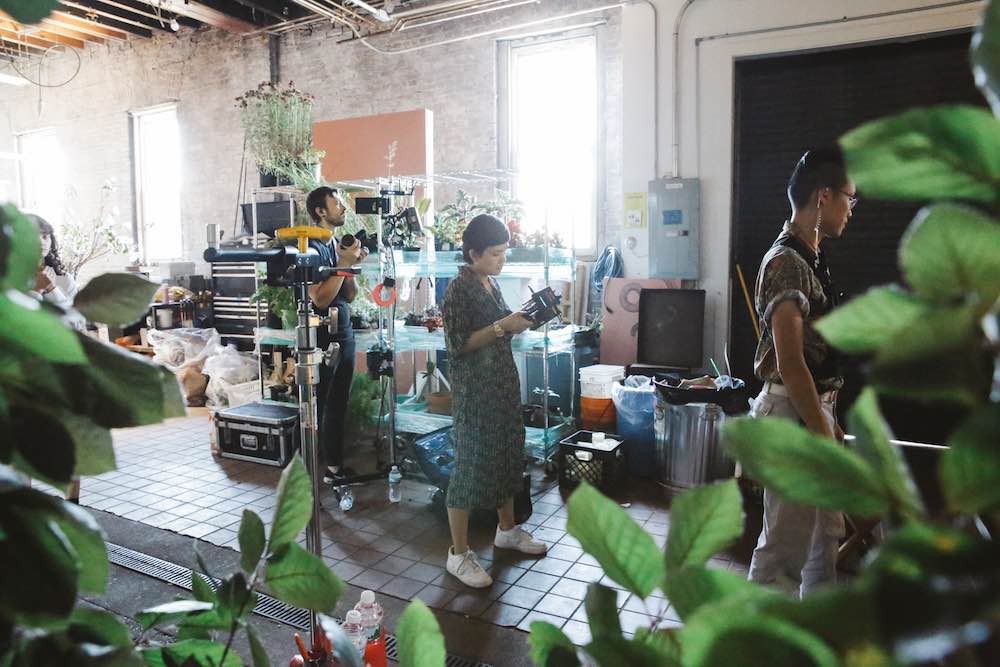 In closing, what’s the best advice you could give a young director starting out in the industry?

A) Take as much initiative as possible. Show your bosses, clients, and your teammates how much you want to be here.

B) Don’t be a jerk, people don’t stick around for jerks!

C) View women around you as your teammates, not your competition. Root for them. Invite them in the room with you. Work together and help each other succeed. (Men have been doing it for years!) 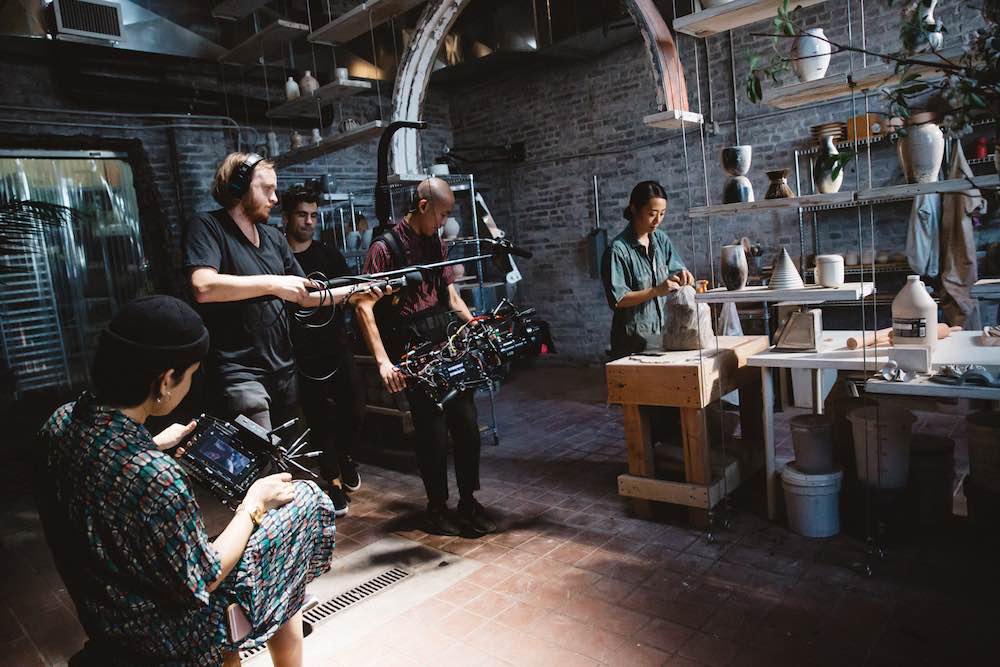