CHLOE SHEPPARD – A MUCH BETTER ILLUSION

London-based director Chloe Sheppard, newly signed to Forever, has a gaze that lingers.

In frame after frame of her short film “A Much Better Illusion, Chloe’s lens fixates with laser-beam precision on Sylvie Makower, the film’s sole subject. Sylvie meets the camera’s gaze with her own, confronting viewers head-on.

Shot on film and heavily stylized in 1960’s aesthetics, “A Much Better Illusion,” is a compelling character study that refuses to reveal its subject’s secrets. Sylvie brushes her hair, runs a bath, and walks along the beach, accompanied by a soundtrack that serves to indicate subtle shifts in mood.

What does the “illusion,” of the title refer to – the performance of femininity under the watchful eye of onlookers? Film’s ability to capture ephemeral moments? The illusion created by a filmmaker for her viewer? “A Much Better Illusion,” allows us to come to our own conclusions; to make our own meaning.

We spoke with Chloe about listening to Black Sabbath, working with collaborators who share your collective vision, and the importance of trusting your instincts. 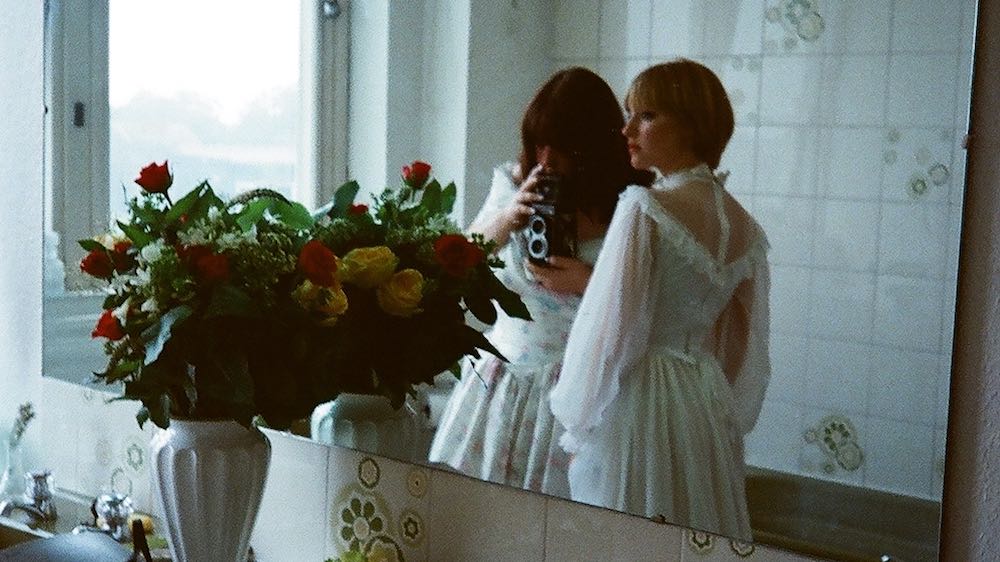 You’re a director who got an early start on your photography and filmmaking career. What initially inspired you to begin framing your world through the camera lens?

I felt the fleetingness of moments from a very young age, and I think that compelled me to try and capture as much of it as possible in whatever way. Taking photographs was what it excited me most, and even when my friends and I were like eleven years old, I used to take so many pictures of us all and upload them to sites like Bebo and Piczo. The motives behind why I still photograph aren’t necessarily the same now, but to an extent they are – when I’m around friends and with groups of people that I love I still take a lot of photos, because I’m so aware of how it won’t always be this way.

With such a clear stylistic point of view, what aesthetic reference points helped you refine your vision? Who are some of your biggest influences, both in terms of photography and cinema?

When I turned 15, I was heavily using Flickr for my photography, and that’s mainly how I discovered shooting film. I also got really into Black Sabbath around the same time, and from watching documentaries on them and old concert footage, I started to fall into the late 60’s spiral that I am so obsessed with still today. A lot of the bands from the late 60s/early 70s were inspiration behind what I wanted my artistic vision to be like, I was so enamored with it all.

At school – when I was around eight or nine years old – we had to recreate Grease for our leavers assembly. I’d never seen the film before, which everyone seemed kind of shocked by, so the day we found out that was our end of year play, I asked my nanny if she had it on video as soon as I got home. She did, and I sat and watched it over and over. I don’t know why I still have such a strong memory of that day, but it makes more sense to me now, as the styles in that film are so present in my own work today and what I love. Perhaps that was a defining moment in my aesthetic really early on, before I’d even properly started making work.

In the present though, some of my biggest influences I’d say are obviously filmmakers like Godard, Jesus Franco, Agnés Varda, Richard Linklater, and Anna Biller. There’s a lot of other films that I could name, too, but not necessarily who made them. With photography, again, a lot of them are from the late 60s/70s: Baron Wolman, Vivian Maier, Linda McCartney, Gordon Parks, Joel Meyerowitz… 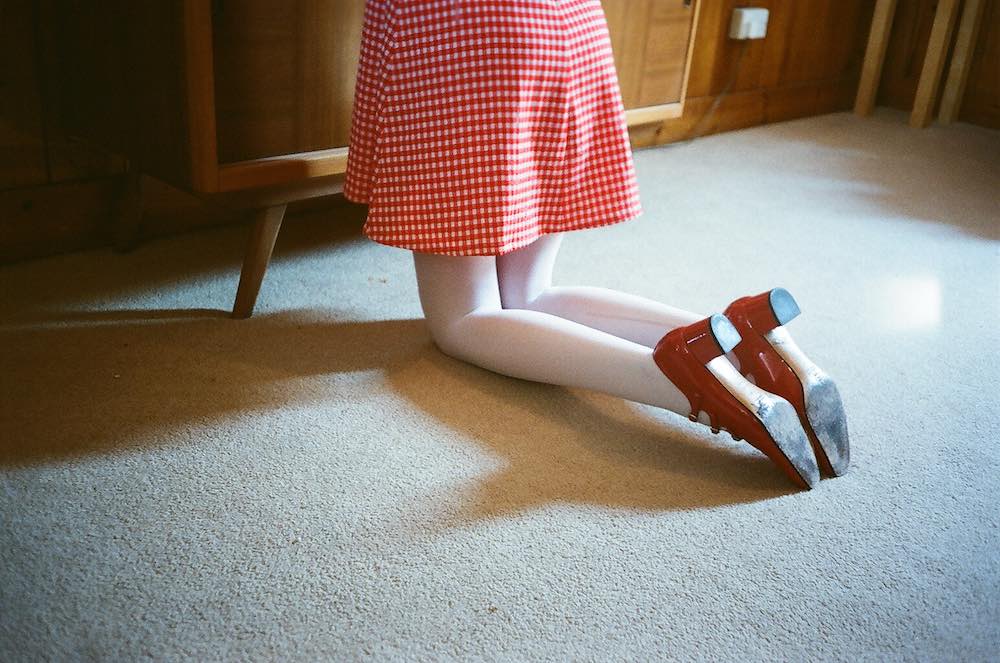 Does social media affect your work at all?

To a certain extent, I think so. It definitely affects how I think about my own work. It’s weird to say, but sometimes if I put out a piece of work I really like, and it doesn’t get many likes, etc, it makes me second guess it. Which is totally ridiculous, as social media likes don’t define anything, but I think it’s a sign of the times and how we seem to validate things. There’s also the bodies of work that I wouldn’t share, because I feel like they’re not acceptable for social media. I don’t necessarily think that’s a bad thing, though – I think it’s probably more unhealthy to have all of your work up online and nothing that’s just for you and whoever you decide to share it with.

Let’s talk about your film, “A Much Better Illusion”. What led you to making this film originally?

It’s something that I’d been wanting to do for so long, but just didn’t think was realistic. Then whilst I was away for my birthday, I was watching a film and reading about a director online, and realized that everyone has that “first project” that they started out with, which isn’t necessarily always great – but it’s a place to start and get experimenting, and so I decided I needed to finally get on with mine.

16mm film was something I was so intrigued by and wanted to learn how to shoot, and so whilst I was trying to get out of a creative rut I felt like I’d been in for months prior, I just decided to put all my energy into the potential of this film and see where it led me. There are always visuals in my head that I want to bring to life, and sometimes I feel like I’m holding them back for something in particular that I just don’t know about yet. For this film, a lot of those visuals felt right. Once I started making mood boards and getting ideas down for what I thought I wanted it to look like, it all started to feel like something I could actually go through with.

What was the process of funding and bringing your vision to life?

Most of the film was funded by my own savings. Once I knew I was going to shoot it all on film, I tried to make budgets to match with how long I wanted the film to be, and work out how much I’d need to spend on buying/processing/scanning all the footage. Then there’s all the other costs you have to factor in too, like location hires/set/costume, etc. I never realized how much work it was until I tried to produce it all myself.

I put together a budget breakdown in a deck of what I envisioned the film to be like, and showed it to Sasha at Forever, who then helped in producing some of the film too. Having people believe in my ideas for it definitely spurred me on and kept me going with the project.

Music plays an important role in the film – can you talk us through the musical selections and their significance?

Two of the songs in it are songs that are very personal to me, just like the themes of the film. When I was watching the footage back for the first time, those songs were what was playing in my head at the same time – to me, they match perfectly. The more erratic and upbeat songs were a decision that was made when we were editing the film together and felt like I wanted to go down a slightly more abstract route.

Do you have a pre-existing relationship with the film’s only character? What was your approach for directing her?

Yes. Sylvie and I had shot together a lot for the 3 years prior to making the film, and have very similar tastes when it comes to cinema and styles, so it seemed fitting for her to be the main character in this project. I knew that she would understand how I wanted it all to look, so directing her was simple, as in our minds, I think we both saw exactly the same visions. 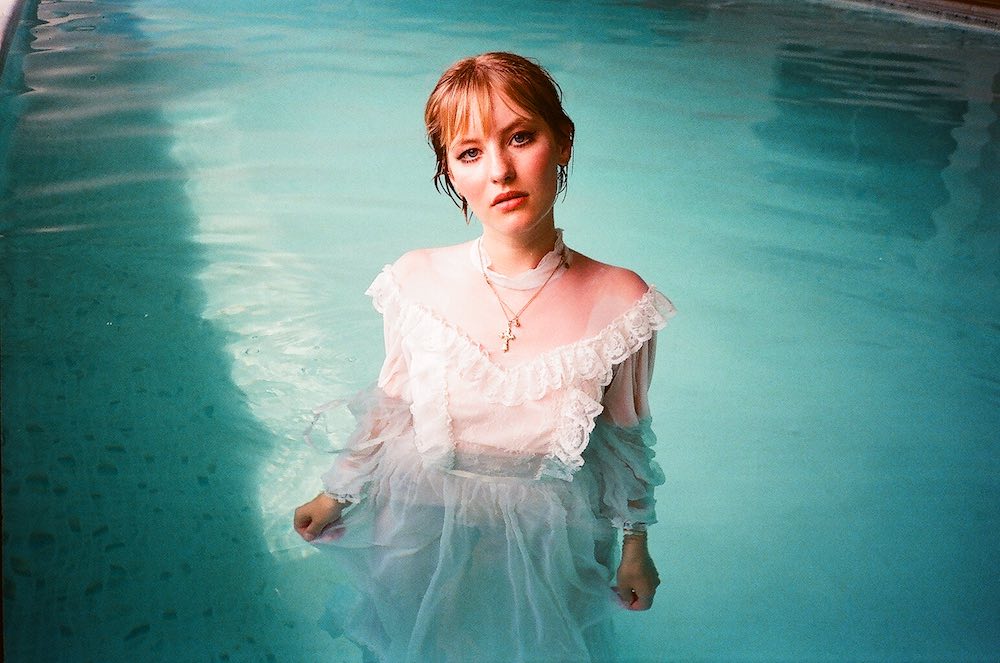 “A Much Better Illusion” is an enigmatic character study – the camera seems fixated on its sole female protagonist. Were there ideas about the gaze and women’s historical role as the muse that you were hoping to investigate with the film? Does this project subvert any familiar tropes of how women are portrayed in film?

It wasn’t something I particularly focused on when setting out to do this film. I feel like it’s the same with a lot of my still work too, I don’t strive to make something that opposes a certain gaze, I think sometimes it’s more to do with the person who’s viewing it. “Muse” is a term that when I hear it, I think of things like Andy Warhol and his muses. I’ve stopped saying it as much now because I actually feel like it’s quite possessive. With this film, it could defy conventions by having there just be one sole character, and where nothing much is ever given away about her, her hopes, dreams and ideas still remain a mystery, it’s up to the viewers to interpret who they think she is. That might not be subverting a trope as such, but as I took inspiration from French 60s films and things like that, I feel like it differs from the conventions in those.

Statistically, it’s still the case that much of the media that we’re exposed to on a daily basis (commercials, film, TV, and beyond) is shot from a male perspective, which fundamentally impacts the representations of women on-screen. Why is it so vitally important for our culture at large to allow women equal opportunity to share their visions of the world?

It’s so important because representation is a huge, huge issue within mainstream media, and changing that would be unbelievably beneficial for so many reasons. I think when things are mostly from a male perspective, it’s much more likely to be their “ideals,” with no regard for the impact it’s having on people who don’t present that way, and it’s so damaging. Women and non binary people need to be given the same opportunities to share their visions because without them, we are missing out on more than half the story. 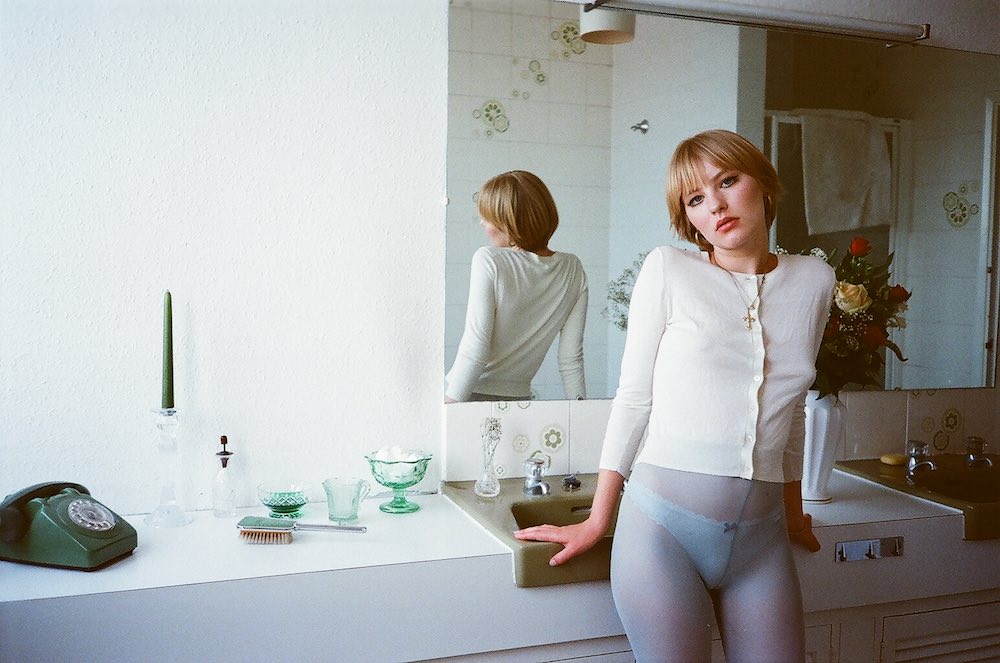 You’ve recently signed with Forever – congrats! What exciting projects can we expect to see from you next?

Thank you! I’m working on another short that I’m shooting on 16mm again, which should be out by the end of the year. It’s in collaboration with an artist who is amazing, I love the concept and can’t wait to get properly started on it. Directing music videos is something I’ve been wanting to do seriously for such a long time, so it’s super exciting that I’m going to hopefully be able to pursue that now!

Finally, what’s the best piece of career advice you’ve ever been given?

To trust your instincts, as most of the time those feelings are right – especially when it comes to your art.