The Artsy x UBS series “Breaking Glass,” directed by Chiara Clemente, is a refreshing reminder that despite systemic biases in every creative field, there are brilliant women working to push the needle forward for representation everywhere.

“I don’t think that ambition is different between men and women,” remarks Paola Antonelli, senior curator of the department of architecture and design at the Museum of Modern Art in New York. “I think opportunities are different between men and women.” Kimberly Bryant, founder of Black Girls Code, was inspired to start the nonprofit organization in order to create the sisterhood of women of color in STEM that she wished had existed when she began her career in tech. And in her 12 years as artistic director of Britain’s  Southbank Centre, theater director Jude Kelly was responsible for the launch of initiatives like Women of the World (WOW)—a global network of festivals that honors women’s achievements  – which she now spearheads.

“Women can do extraordinary things – because they’re human,” Jude muses.

We spoke to Chiara about working while pregnant, her hopes for more risk-taking in commercial hiring practices, and fighting against the misconception that successful women can’t also be supportive of one another. 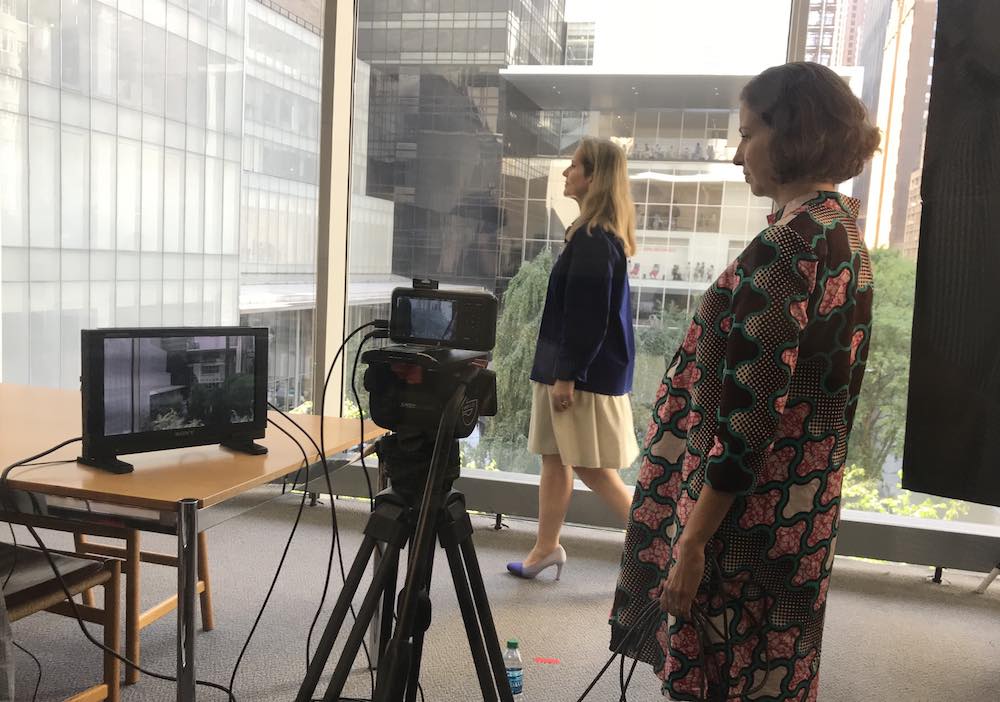 What initially excited you about the prospect of shooting this series with Artsy and UBS?

It was the perfect synthesis of events. It had been some time that I’d been in talks with Artsy to work on a project together and the angle they wanted to take with “Breaking Glass,” was very much in sync with my filmmaking style.

What are some of your strategies, as a director, for getting your documentary subjects to open up in conversation?

The conversation, for me, ideally starts before the day of the shoot, either over the phone or in person. I really believe in connecting with my subjects beforehand, so that when the cameras turn on they can feel like it’s just them and me in the room. This allows for the strong feeling of intimacy, which comes across to the viewers. Ultimately, my goal is to make each person watching feel like they themselves are sitting across from the subject. 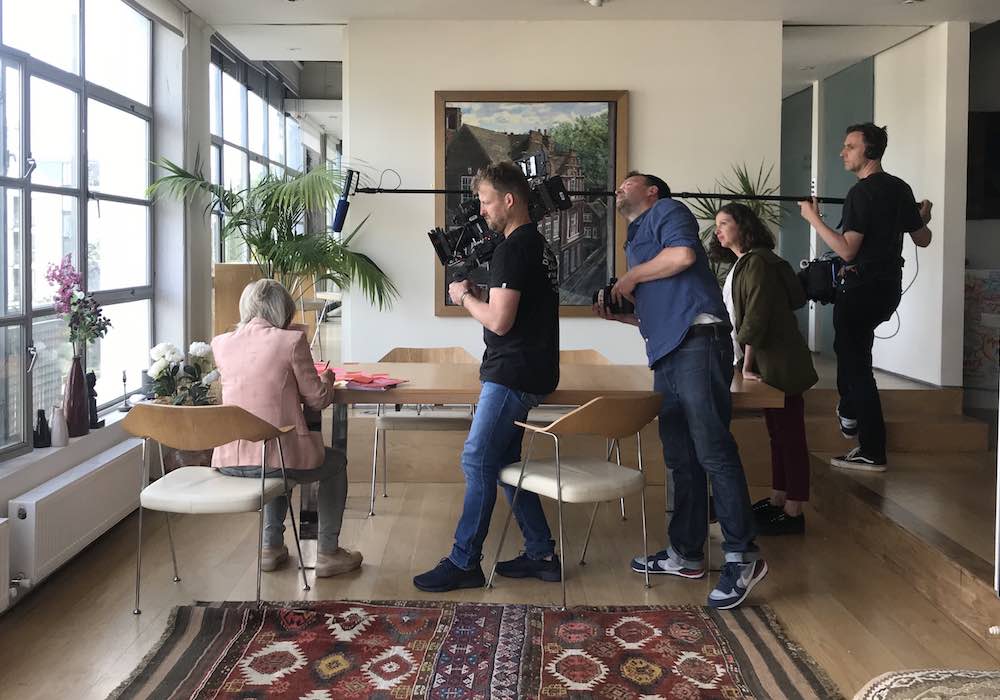 Tell us about some highlights of your time spent with each of the inspiring women featured in this series.

Jude Kelly was so generous to invite us to film in her home. Filming in a personal space is ideal, because it helps the subject feel comfortable and allows for me to discover visual elements that I can capture, which adds a lot to their story.

With Kimberly Bryant, the timing for the shoot was perfect, because we had the chance to film one of her Black Girls Code workshops. We filmed the b-roll before the interview, so I had the chance to experience her powerful mission and see the effect it had on the young girls before speaking with her. 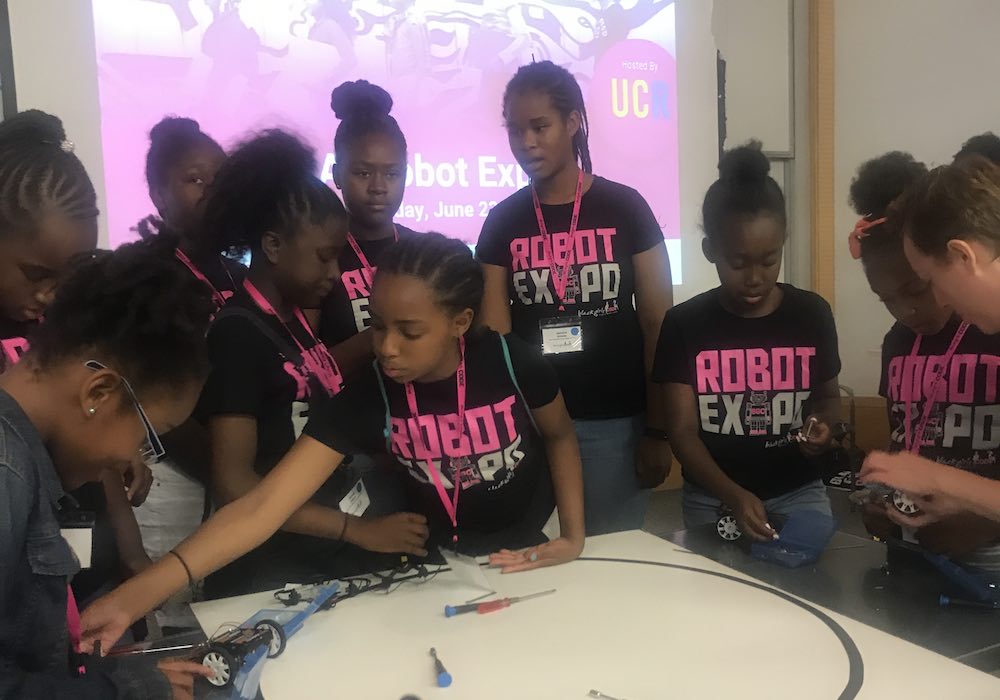 With Paola, we naturally connected because of our Italian backgrounds, and filming her at the MoMA allowed for the energy of her day-to-day to come across in the interview.

What observations uncovered in these conversations were the most surprising or the most fascinating to you?

I was happily surprised by the warmth of all of the three women, which came across as strongly as their power and drive. I feel there’s often a terrible notion that to be successful as a woman you have to be really tough, and even mean, but these women really proved that this doesn’t have to be the case.

I was also left extremely inspired from hearing how each of these women, through the challenges of being a woman in their field, rose to huge successes, but once they did, decided to give back in a way that would help facilitate the journey for other women. 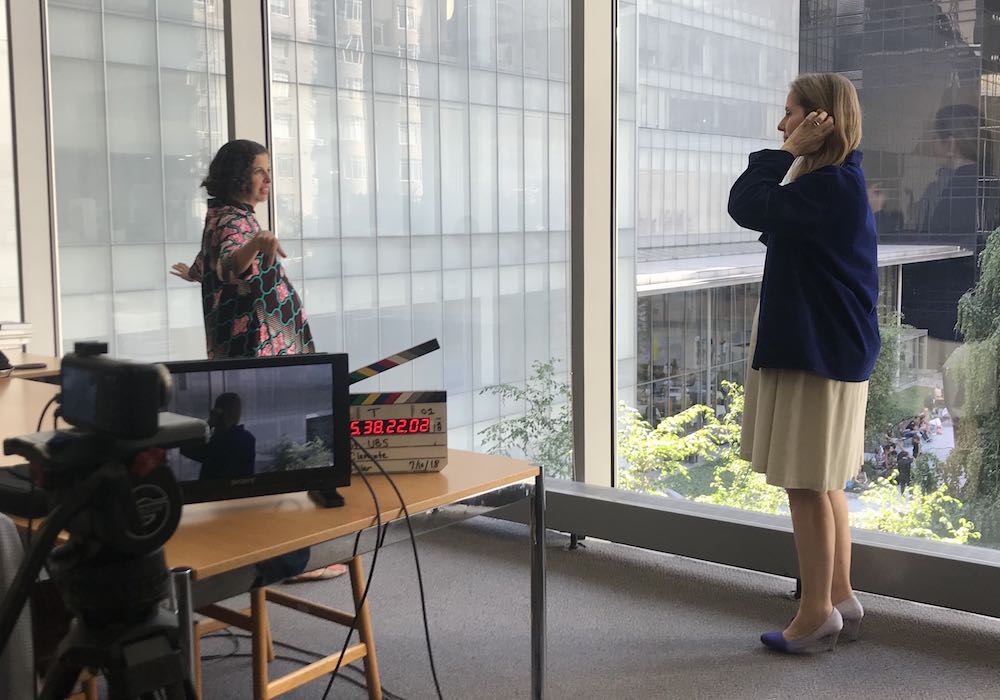 As you shot this series while pregnant (congrats, by the way!), can you talk about how this played into the experience of the shoot?

Thank you! I’m excited that there are so many more women filmmakers today then when I started, but I still feel there is not enough conversation around motherhood in the industry: first, about the challenges one faces, but also about knowing that it’s possible to do both. I had luck, with the various projects I worked on while pregnant, in that people (mostly women) were super supportive and didn’t question my abilities while pregnant. I ended up filming throughout most of my last trimester, and was in the edit room the day before I went into labor. I felt an extra sense of drive and inspiration, and sitting across from my subjects while pregnant definitely became my secret weapon to get them to open up even more.

Did the shoot pose any specific challenges, on a technical or aesthetic level, that had to be reckoned with?

The biggest challenge was to create a unique personal style for each woman and their story, but, at the same time, connect each film so it would come across as a series. We also had to film in three very different locations – London, New York and Los Angeles. In order to create that connective tissue, I used different tools.

To start with, I worked with the same DP and camera, and set looks at the beginning that we followed throughout. I also created an intro scene that was similar with each woman, so that the film’s opening connected them from the start. In the end, I felt the different locations allowed for the personal feeling of each story to come across. 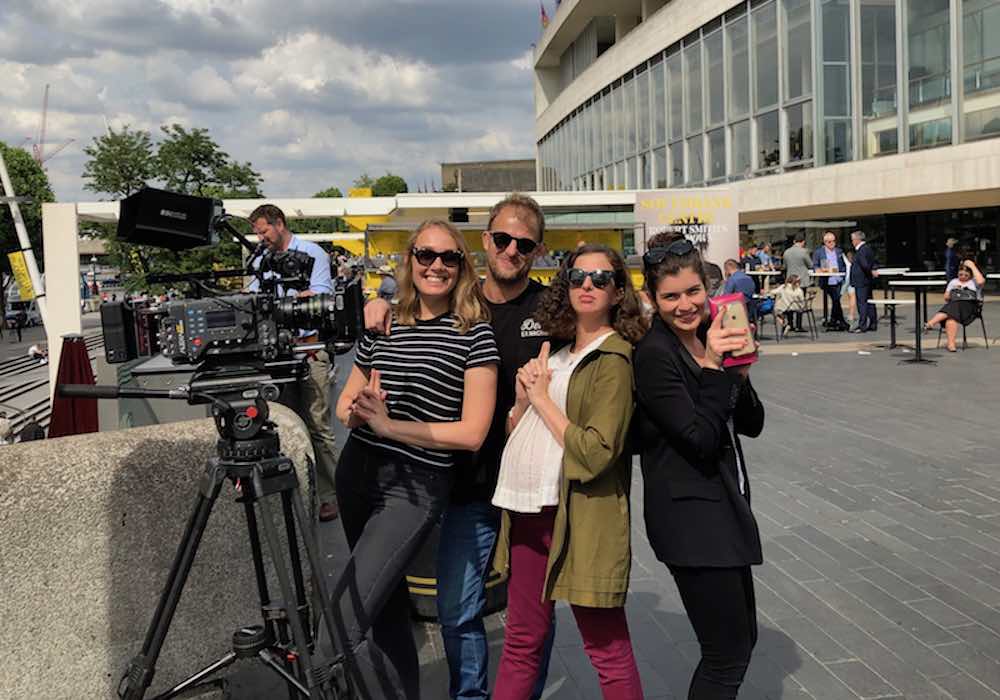 The women portrayed in this series discuss some of difficulties that they and other women have experienced while navigating professional careers. Did these conversations resonate with your experience of building your own career as a woman director?

Yes, there were definitely moments they spoke about that resonated with my own journey. The discussion of the lack of other females when they were starting in their fields brought me back to film school and being one of the only women in the program. I had to keep proving myself in a different way then my peers, and this continued to be the case when I started working. I often was mistaken for a PA on bigger shoots.

I still feel we have a ways to go, but today there is a much clearer sense of the community of women filmmakers, especially thanks to platforms like Free the Bid. This allows for us to feel supported in what we’re doing, and not alone when facing the challenges. I do feel, however, that I have been up for some more commercial projects where they make me go through the whole process of pitching and I come close to being awarded the project, but in the end, they go with the older male director who already has a proven track record. I wish people would be willing to take more of a risk – I think it would allow for what we see to truly evolve, and not just keep repeating. 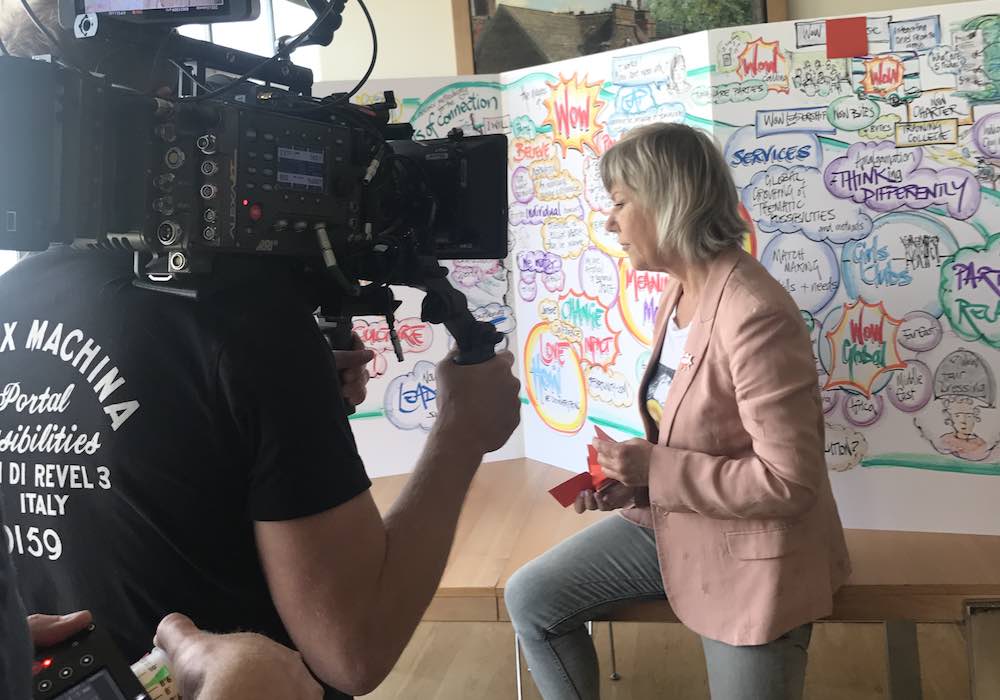 Finally, what are some of the best pieces of advice you’ve received over the course of your career, to pass along to women directors getting their start today?

My advice, from my own experience, is to find your voice as a filmmaker and stick to it over time. This will lead you to success in whichever form of film you work in and will make you stand out from other filmmakers, male or female. 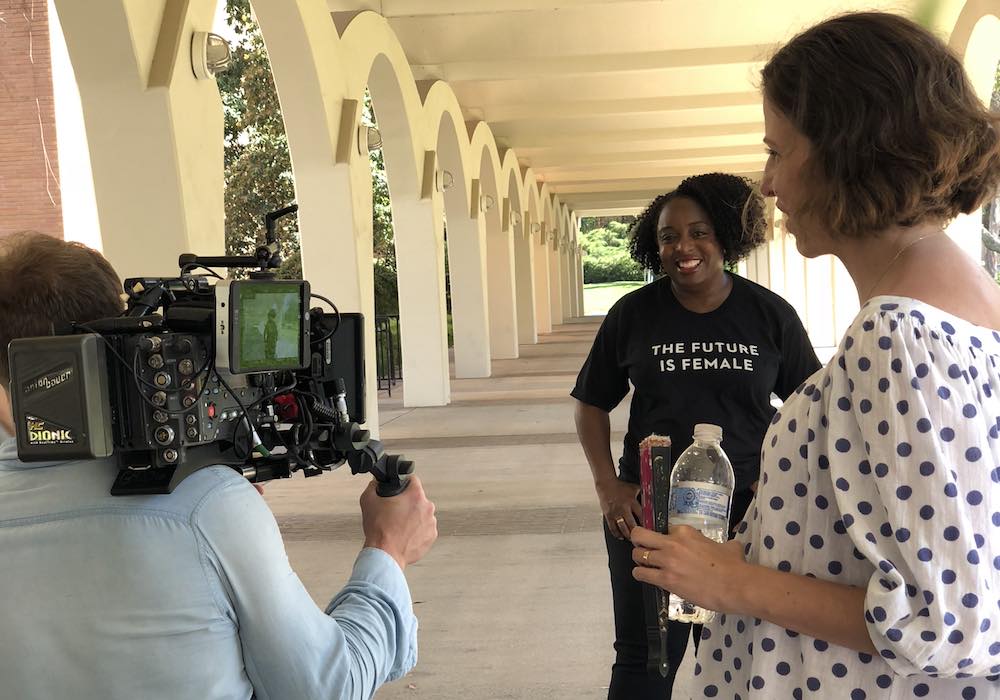