In director Bethan Seller‘s latest work for the Royal Bank of Scotland, an ordinary cafe becomes the stage for one daydreamer’s jazz-hands fantasy world.

Created with production company Greenroom Films and newly pledged agency The Leith Agency, who are the first Scottish agency to commit to the Free The Bid pledge, Bethan takes viewers into the mind of her main character, Sophie, as she envisions climbing up on a table and belting out a rendition of Lady Marmalade. Bethan’s assured comedic tone and visual style effortlessly transition the scene from a quiet restaurant to a lavish performance (complete with a gold fringed bodysuit, cake-bearing waiters, and a magical flying scarf), before plunking Sophie back to reality. We wish all daydreams could be this fun!

We spoke with Bethan about drawing inspiration from the showbiz glitz of “Chicago,” the tight choreography and timing required for getting one-take shots juuust right, and creating work that pushes at the boundaries between real life and fantasy. 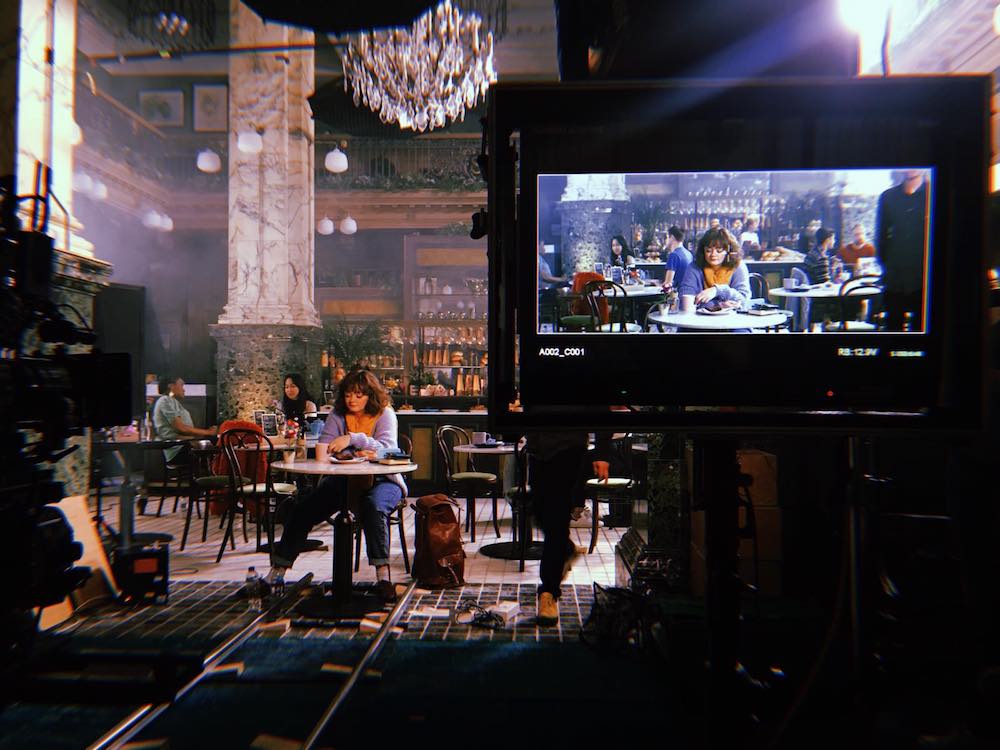 Your spot for the Royal Bank of Scotland starts in the real world, but veers off into a fun fantasy scenario. What elements of this brief excited you most from the get-go?

Well, I think it’s fair to say that as soon as I heard the words, “Lady Marmalade,” my ears were officially pricked. The script was beautifully simple and charming, with loads of creative wiggle room. Sophie was a blank canvas, and one of my favourite things to do is to develop characters. Her daydream (although it was never written to be actualized in the way it was!) had loads of potential for my ideas to run wild. I put myself in Sophie’s shoes and thought, “what would I want to see in a coffee shop daydream?”

How did you and the agency work together to bring the vision for this spot to life?

I worked with Leith Agency in Edinburgh for this spot. It’s the first time I’ve worked with them, and it was a fab experience. They were really collaborative and we shared the same vision immediately, which made the process very smooth indeed.

Were you excited to have the chance to shoot such a comedic spot?

I was! I had a bit of a childhood dream that one day I’d have my own sketch show. I used to entertain my parents and their friends at dinner parties by doing my best impersonations of TV sketch show characters of the era. Now I’m the other side of the camera, I love making work of a playful nature – light-hearted scripts where the cast and characters don’t take themselves too seriously (and, if I’m really lucky, some eye-candy-art-direction thrown in for good measure!) This script was the whole package. 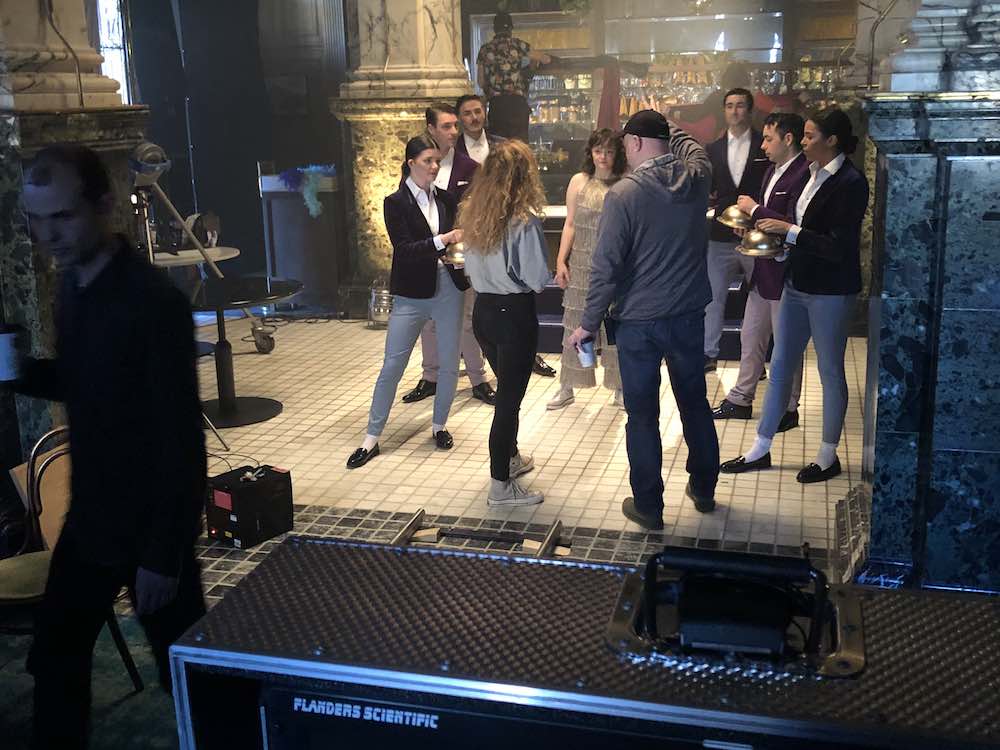 How does humor play into your work usually?

All of the projects I work on outside of my commercial work usually have an element of comedy wrapped into them, whether that’s in the character, the script or the take-away from the film. One of the first films I wrote and directed was a satirical luxury commercial for tampons (designed to raise awareness of the luxury tax placed on them) – it involved a slinky silky nightie and had a very luxurious 1980s Galaxy chocolate advert feel about it…

Commercially, I try and weave it in where it’s called for. In the past, I’ve generally worked on scripts that aren’t dialogue based, and because of this, I’ve naturally been drawn to casting people who can bring a comedic performance with their facial expressions and mannerisms alone. When the casting briefs are open, like this one was, I love steering away from a typical commercial look, and writing in characters who are a bit more human.

This spot has such a well-defined color palette. What were some of your inspirations for the spot’s aesthetic?

For the daydream scene, I was keen to emulate the richness of Moulin Rouge, but wanted to take out the pinks and reds that make Lady Marmalade so notoriously sexy! Instead, I opted for the golden showbiz glow of a musical theatre piece. I took a lot of inspiration from Chicago the musical in this scene, particularly Richard Gere’s performance of, “All He Cares About Is Love.”

The café scene, on the other hand, is a little more set within the real world. My starting point for inspiration was the cafe in Amelie, but I ended up veering towards a cleaner, less stylized grade, with a definite blue hue in the shadows to point us in the direction of The Royal Bank of Scotland’s brand palette. These rich blues and purples are also woven throughout the uniforms of the waiters in the dream scene, but are graded with warmth. The contrast of palettes between the two scenes was something I was wanted to ham up enough for the transition into Sophie’s fabulously opulent daydream to be really clear.

The last main thing was that the whole piece had a deliciously rich, cinematic feel about it. 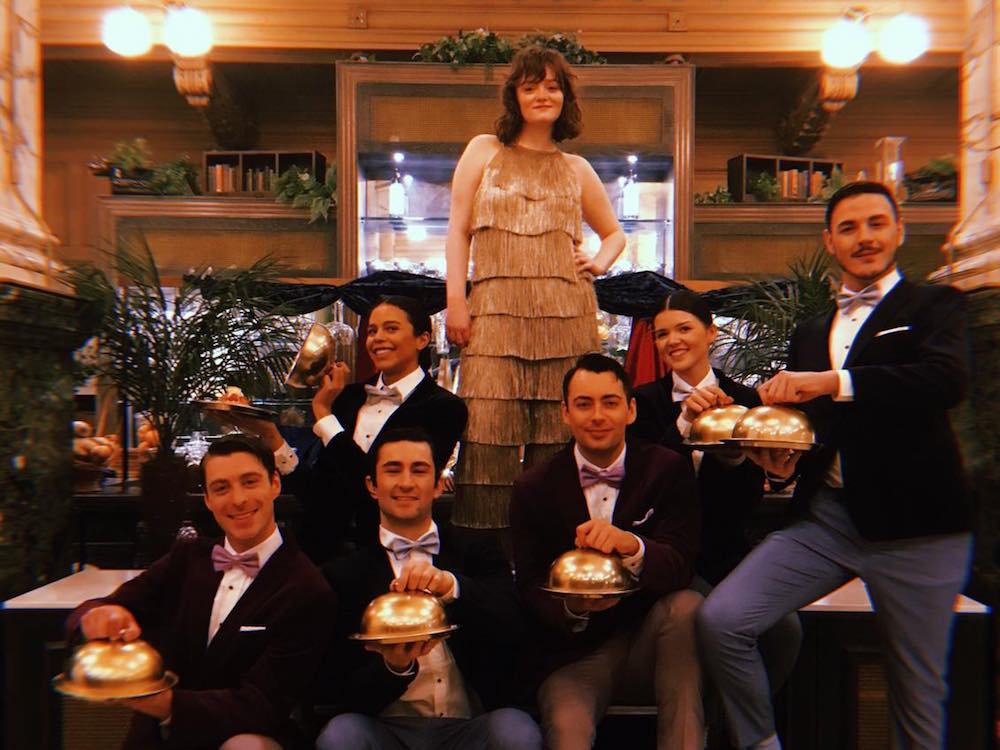 How did you and your crew approach creating the tightly composed shots utilized throughout the piece?

Once I’d written the shot list, it became clear that, with only 4 shots to film and a relatively straightforward edit, a lot of the magic would be captured in-camera after a lot of rehearsal and re-takes.

Each shot came with its own timing challenges and unique technical hurdles. The daydream sequence was probably the shot with the most to think about – a spotlight reveal, followed by a magical(/fishing wired) flying scarf (look again if you missed it!), and a simultaneous jib down and track back on camera, while the rest of the house lights came up. This is all while 6 waiters reveal their desserts in synchronization, as Leah saunters down some steps and through the middle of the waiters to reach a specially built “camera shelf” where she could take her very specific “daydream position” ready for the match cut (and the confetti explosion, of which we had a limited number of cannons!).

Just to add a bit of drama, this all had to unfold within 8 seconds, so our producer Lucy was ruthlessly stop-watching the entire process and culling any shots that went over. As you can imagine, the general rule of thumb all day was rehearse, rehearse, rehearse!

Were there any specific visual cues employed to clearly differentiate between the “real world” and your protagonist’s Lady Marmalade fantasy?

I touched on this briefly when I mentioned about the grade, and (apart from the obvious wardrobe and art department changes) there are a couple of other sneaky clues, too… The first are the in-camera lighting changes. I took inspiration from Eternal Sunshine of the Spotless Mind here, and used the individual turning off of lights to signal a change in mindset and focus. Sophie’s surroundings slowly begin to slip into darkness as her mind drifts away and wanders off into a daydream. This was timed to work with the camera move, which was timed to work with Leah’s (Sophie’s) performance. The camera starts to float away from the central line we’d been following and makes for Sophie’s shoulder as she begins to glaze over, giving us the idea we’re about to be transported elsewhere…

I also wanted to ensure there was an audible clue to help the transition, and those 7 magical upward chiming notes do the job perfectly.

What kind of direction did you give your actors on set, in order to capture the performances you were looking for?

For Sophie, I’d say the casting for this was one of the most important (and most fun!) parts of this job. I wheedled out Leah, who responded really well to some of the choice phrases below I was enthusiastically barking out on the casting day:

“Do you know Clint Eastwood? Yeah, do that face.”
“Shimmy! Shimmy!”
“Dance like you’re trying to be sexy but it’s just not working.”
“Channel your inner Austin Powers!”
“Daydream like you’re really unaware of your own face.”
“Don’t overdo it. Think tiny weeny ‘micro’ expressions.”

There were a few close contenders, but those phrases seemed to eliminate out anyone who was worried about actually looking sexy, and anyone who daydreamed like they were batting their eyelashes in a perfume advert. From then on, my job on set was made really easy, because I knew Leah just “got it.”

What are your favorite elements about the final piece?

One of my favorite elements is the match cut. I think we really encompassed visually and audibly that moment when you snap out of a daydream and back into your surroundings. I also love the choreographed lifting of the golden cloches revealing those tasty puddings, timed with the track and jib of the camera. Isn’t it nice when a plan comes together?

I’ve found myself drawn to characters and stories that are a little larger than life. It’s funny that a lot of the short film scripts I’d been writing recently also revolve around a central character getting lost in a daydream! I also love the opportunity to explore the boundaries of “real life,” particularly when it comes to art direction. The sets I love to create are either romantic, filmic ideas of a location, or are stylized to the point where they’re just on the edge of ‘passable,’ in terms of sitting within reality.

Finally, what can we expect next from you?

My thing at the moment is choreographed movement and dance. I have a few ads I’m working on – which are coming out very soon – that are more explosive color bombs filled with playful performances and dance.

I’m also trying to find the perfect track to use to accompany a dance film I’ve been devising with a Movement Director over here in Manchester – I’ll get my teeth into that once work’s slowed down a bit! I’m also hoping to get a couple of music videos under my belt, as well as some short comedy sketches (not with me in them this time…!) at some point. I have bags of ideas and it’s all very exciting, which makes it quite tricky to focus on one thing! 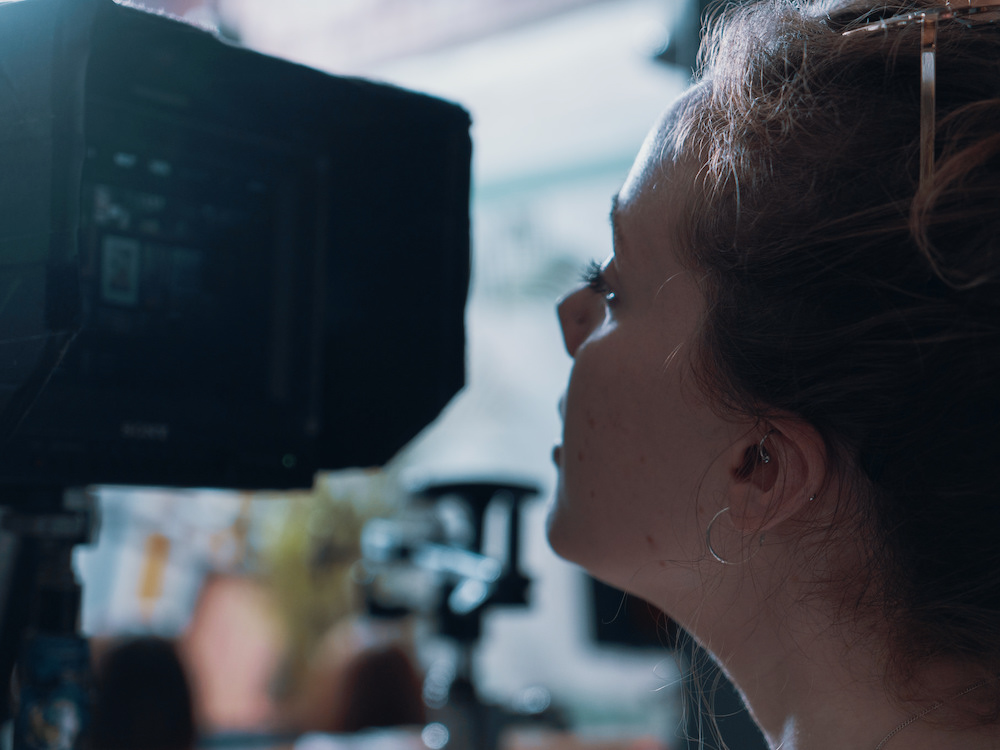