Allie’s dark, luxurious vision, previously explored in her work for artists such as Moses Sumney and serpentwithfeet, provides a rich counterpoint to Chromeo’s uptempo track. Robin Givens steps into the video’s lead role, a female version of the “sad king” archetype – overwhelmed and exhausted by a wealth of options. It’s a fitting sentiment for a generation of consistently dissatisfied Tinder daters.

We spoke to Allie about instructing male models to do synchronized pushups in a pool, getting lost in the 75-room mansion, and her desire to make any kinds of films she wants with the same freedoms afforded to male directors – and to get paid for it! 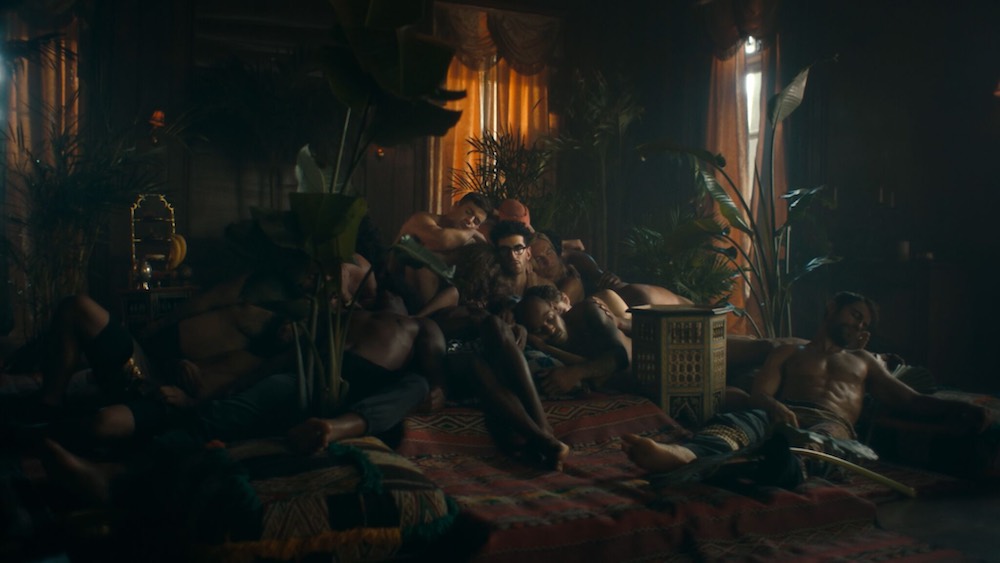 Your video for Chromeo’s “Don’t Sleep,” is a playful inversion of some classic music video gender roles. What was the starting point in the brainstorming process for the idea?

I was initially inspired by the song’s line, “a boy likes me knows how to take direction,” mostly because I found that kind of deference – as well as Chromeo’s general willingness to self-deprecate – to be charming. From there, I envisioned this male harem led by an older woman, who plays a twist on a “sad king” character. I was thinking a lot about dissatisfaction in the age of Tinder, how our potential access to so many dates/partners makes it impossible to appreciate whatever we have. There’s always the possibility of “something better” out there. The video is about how even as a “powerful” woman, luxury and privilege and options don’t amount to happiness.

How did you and Chromeo work together to hone in on the creative vision for this video?

I pitched the idea to Dave from the band over the phone, and he said, “let’s do it.” He had seen my past work with Moses Sumney, serpentwithfeet, Autre Ne Veut, etc. and wanted something similarly dark to juxtapose with the upbeat funk track. It’s a rare luxury to have any kind of conversation with an artist before you’ve even sent a treatment in, so I was really lucky in that sense. Dave and Pee were very excited and involved, but also fully trusted me in the process, which made for a collaborative yet authentic discourse without too many cooks in the kitchen. We talked about conceptual hooks and aesthetic references, and they had a ton of ideas, but at the end of the day they were encouraging me to “do what I do” which was really refreshing – not just for me, but for the whole team behind the video. 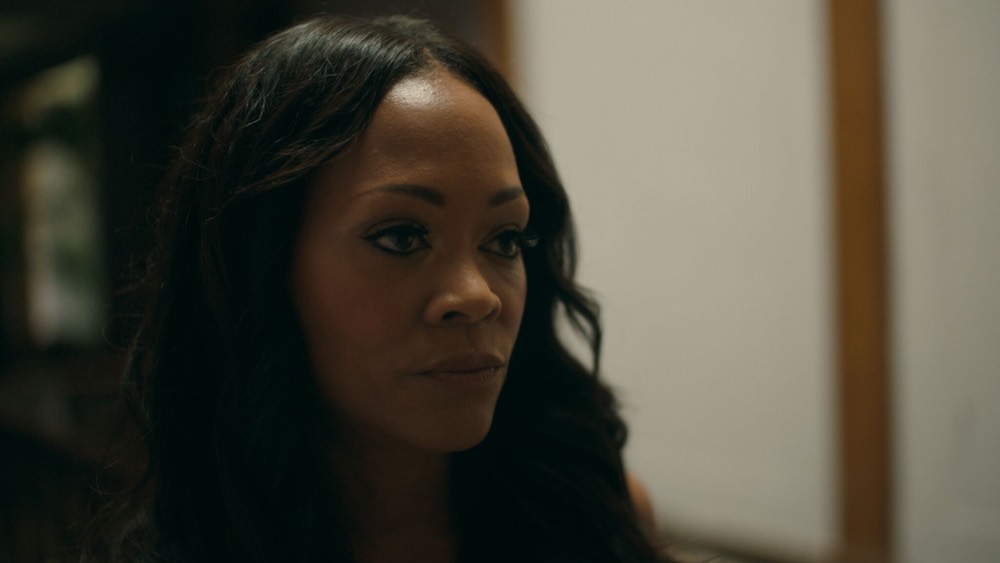 The casting of Robin Givens as the video’s female lead is an interesting choice – can you tell us more about this decision?

I really wanted the video to star someone slightly older, not only because women over 25 are underrepresented in videos these days, but also because I felt that gave the character more weight and power. Robin is a stunning person inside and out, and perfectly embodied the role immediately. There’s a dissatisfaction and nihilism to her character, who “has everything” and yet nothing is ever enough. I think it was fun for Robin to take on the “melancholy queen” role, and it was such a pleasure for me to direct such a pro. 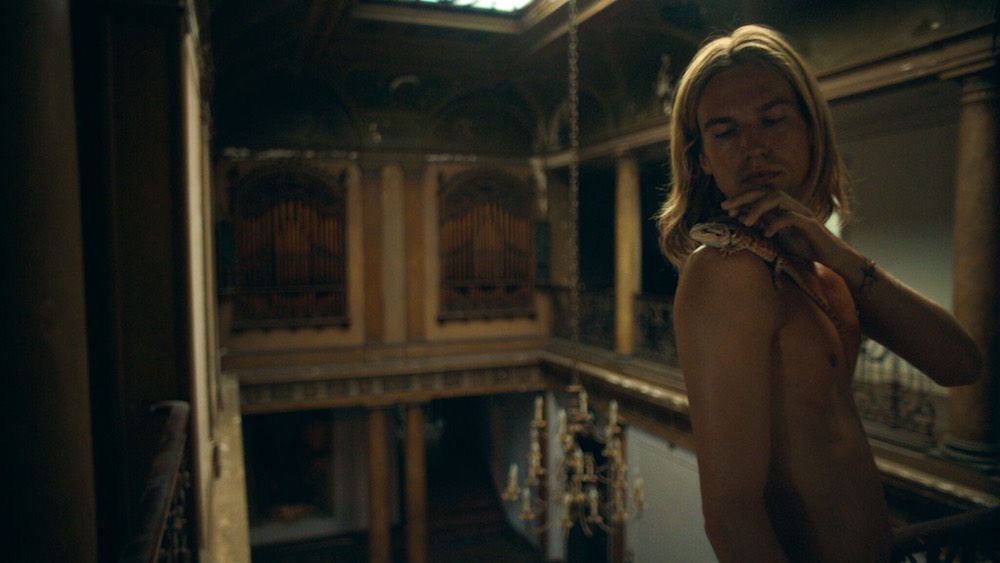 The interiors showcased in this video are pretty incredible! Where did the shoot take place? Did the location pose any interesting logistical challenges?

We shot in a giant mansion in Yonkers, NY. There’s about 75 rooms in the house – it’s pretty nuts. The house comes pretty much unfurnished, but our amazing production designer Pili Weeber completely transformed the space. As lucky as we were to get that location, I didn’t want to lean into the Victorian vibes too much. Dave and French Montana are Moroccan, and Pee is Lebanese, so Pili pushed the art direction into a more North African/Middle East-inspired look with the props and set dressing.

What were some of this shoot’s most exciting aspects, from a technical perspective? From an aesthetic perspective?

It was exciting to have all these hot muscular dudes in the video; it added kind of a meta element, since the shoot was run mostly by women. A real highlight was the pool scene, where I found myself yelling, “5, 6, 7, 8,” at the top of my lungs as they did pushups to the beat..a LOT of pushups in a row, haha! It was a challenging shoot day, for sure – the usual crazy last minute scheduling, a location large enough for people to get lost, etc. but something about the ambitious nature of it made everyone on set be really on top of their game. The vibe was really positive.

As far as aesthetics, I was really excited to lean into my darker visual sensibilities for a more accessible pop/funk track. The lighting and cinematography (by Kevin Hayden) and color (by Sofie Borup) were so much fun to develop – we were looking at Renaissance paintings as a starting point, and Kevin is a master at minimal, but really striking lighting plans. Sofie at Company 3 is a real talent- she’s detail-oriented and has amazing taste. And Savannah White, the stylist, really killed it with the vintage Versace-inspired prints and silky loungewear. We had worked together for the last year, so she just “got it” immediately. 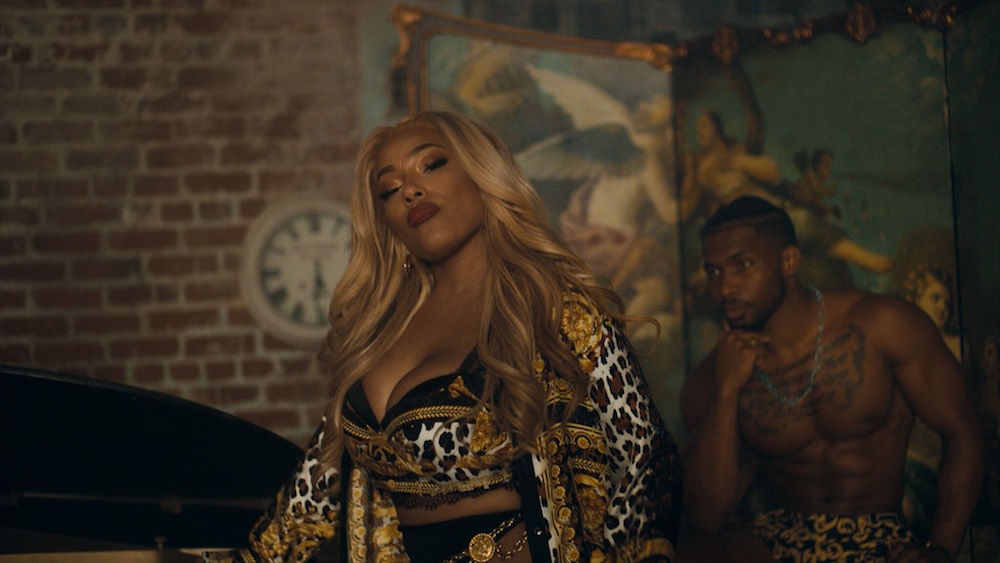 Honestly, between Whitney the producer being an absolute production genius, and getting some of my favorite crew members on board, it was one of those shoots where the elements just came together naturally. So many talented and committed people were involved, many of whom had already worked on my projects together before. And then to have the artists be so chill and open minded…a lot of the excitement was about being able to do my job with such a strong collaborative support system around me. 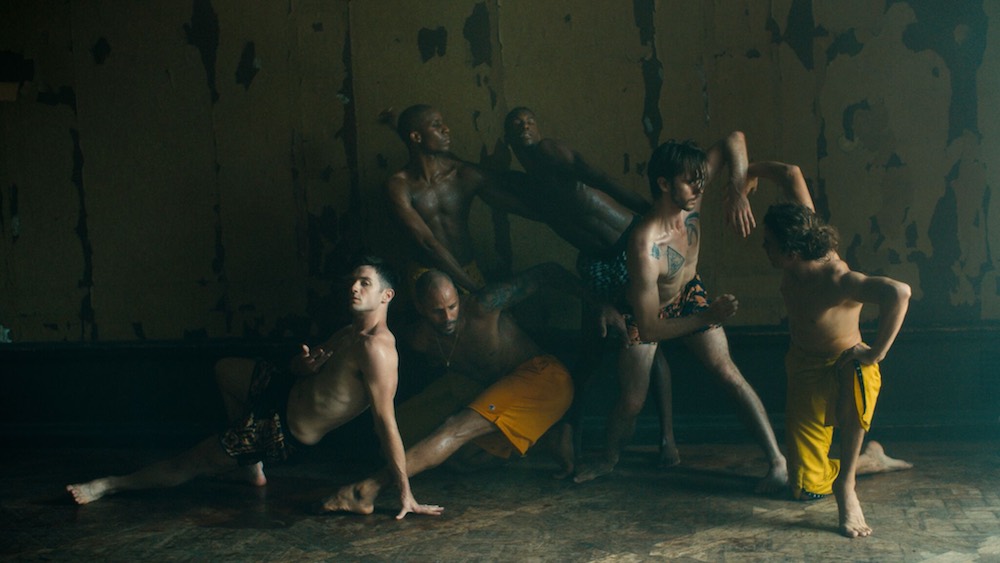 This video makes use of some impressive choreography – how do you, as a director, approach filming such movement-heavy footage?

I had worked with the choreographer Amy J Gardner previously, and she’s a director in her own right, so she likes to be involved in a more holistic way – not just choreographing the sequences, but helping me design how they work into the video as a whole. She works a lot with architectural elements, so some of the sections (such as the men creating a tableaux against the wall and the dancers on the stairs) came out of that collaborative process with Amy.

The main directorial note for the dancers was to direct their movements towards Robin whenever she’s in frame – that it’s a performance for her as they all try to impress her. Dance in videos is so fun to direct as far as camera movement – you can really be more formal, sensual, and instinct-driven with that footage. 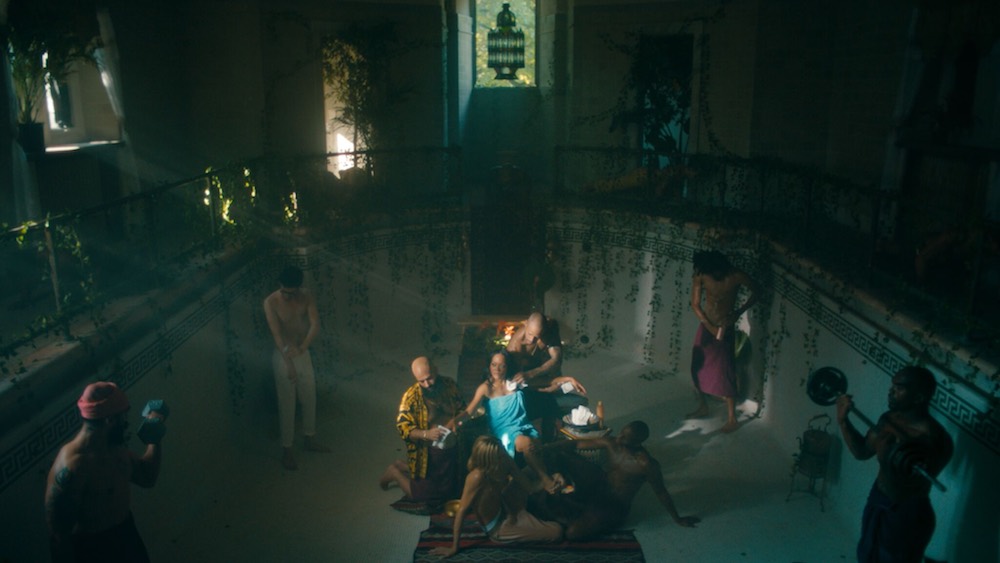 Since the “Don’t Sleep,” video reinterprets some traditionally “male-gaze” aspects of music video filmmaking convention, can you tell us about your thoughts on the FEMALE gaze? How do you think the female gaze can be utilized to reframe culture?

Personally, I find this to be a tricky subject. While without a doubt I find it urgent and crucial that women’s perspectives onscreen be represented, I also think that defining “the female gaze,” can be limiting. Bjork put it really well in her open letter in 2016, where she said that men/critics are okay with women being singer-songwriters bleeding their heart out for some man, but that when she wants to sing about galaxies and atoms and nerdy math, people feel something is missing. It’s like all we can be is emo and “feminine.” I am a woman, but I want to make films not just about women’s perspectives, but also about men; films that might be perceived as “masculine”; films that are perverted. I want to make everything from car commercials to films about serial killers, and all that’s in between.

So while I was intentionally playing with gender stereotypes, and while I suppose anything I make will inherently be told from a female perspective, what was most important was that I was given the opportunity to make whatever I wanted – not just what is considered to be “feminine content,” – and that I got paid to do it. I think that this is the most important thing for us women right now: that we get work in the first place, instead of trying to define how we look at the world.

I’m working on my debut feature, which I developed as part of the Venice Bienniale this fall, and plan to shoot by next winter. Otherwise I’m still working on music videos, branded work, and a new short film in the coming months. 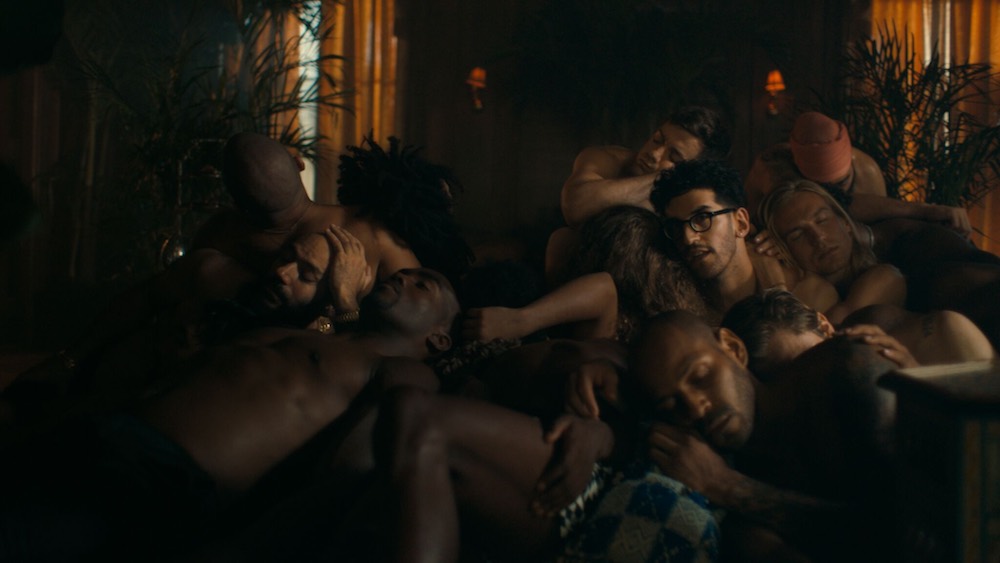