ADINAH DANCYGER – THE LIFE OF A SHORT FILM PT. 2

How does a short film come to be? What’s the process that takes the initial spark of an idea from a director’s notes and sketches onto the set and beyond, to being screened in festivals, showcased on content platforms online, or winning awards?

Filmmaker Adinah Dancyger spoke to us in January in advance of screening her short film, Cheer Up Baby, at the 2018 Sundance Film Festival.

CLICK HERE TO READ PT. 1 OF OUR INTERVIEW WITH ADINAH!

After a successful journey through the festival circuit, Adinah’s film is available to stream, having been selected as a Vimeo Staff Pick (congrats, Adinah)!

Watch the film above, and read on for the second edition of our conversation with Adinah, where we delve deeper into her festival experience, her feature film aspirations, and the conversations that her work has sparked. 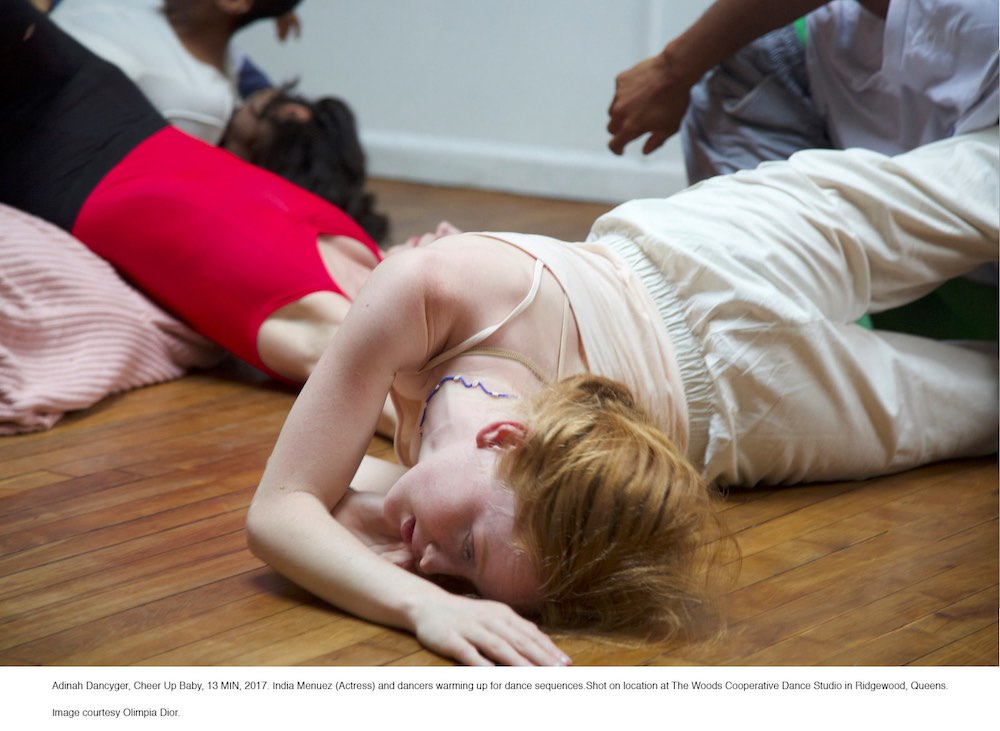 When we last spoke with you, Cheer Up Baby was about to screen at the 2018 Sundance Film Festival. Can you talk us through your experience at the festival?
Sundance was wild. It was pretty overwhelming, having come from a writing cave in my cold NYC apartment. I wasn’t quite prepared to be as social as I had to be, but sometimes it’s good to be forced to. Utah was cold and a whole lot of fun, and ridiculously beautiful, but it’s pretty astounding how this is a mecca for filmmakers and yet is so inconvenient in terms of being a human being. I had the worst cold afterwards. The best part of it was meeting other filmmakers and people who work in film— getting to meet those I’ve known peripherally, new filmmakers, and seeing friends from home with different projects. It’s like adult camp, hanging out and being cold together and jiving about how crazy this place is.
Cheer Up Baby has had an impressive festival run – along with Sundance and the 2017 NYFF, it has screened as a part of the Los Angeles Film Festival, Nantucket Film Festival, Montclair Film Festival, Olympia Film Society, Seattle International Film Festival, and more. What were some of the highlights of the festival circuit? Did you come away from Cheer Up Baby’s festival run with a greater understanding of this part of a film’s life cycle?
Sundance as a whole was a highlight, an incredible opportunity, a reality check, and a jumping off point to take my feature script more seriously. Each time I come back from a festival, I just want to make a film right away. Festivals put the fire under your ass in that way, because you’re seeing other people doing it and wanting to be there too. NYFF has a really great energy, and it’s cool to be uptown for a good cause. I was a part of their artist academy as well as having my film there, so I was pretty much living at Lincoln Center for the week. It’s a lot of movie watching and getting to hang out with filmmakers. NYFF always has a strong lineup, too, so that was a pure treat. I just felt really fortunate to be part of it all.
The film has been traveling more so than I have been (unfortunately), but I’m so grateful it’s been going across the states. That’s the thing about shorts and festivals— it’s so great to get into as many as possible, but it’s not feasible to afford your physical presence at each one (though I’ll be traveling to LA next month, so I’ll let you know how that one goes)! This past year has also been struggle, as I’ve been working on a new project; I’ve been making all sorts of sacrifices to stay focused, because that’s already a struggle in it of itself.
In our previous conversation, you mentioned that you were hoping that Cheer Up Baby has a chance to have “another life after the festival circuit,” becoming “part of a larger conversation, outside of filmmaking”. Since the film has now been selected as a Vimeo Staff Pick, are you excited about the potential of its expanded viewership?
I think the online premiere is one of the best ways we can do that, because of the amount of viewership a staff pick can offer. Accessibility is really important to me for this film, and the internet is the most immediate way to do that. We’ve been showing the film out in non-festival/public screenings on an international playing field; we’re hoping to keep that going as well since live screenings can be super intimate. I’d be curious to know what non-US people think of the film, so hopefully I’ll get a chance to. For now, we’re letting the chips fall where they may by putting it out there.
How did the Vimeo Staff Pick selection come about?
They reached out! 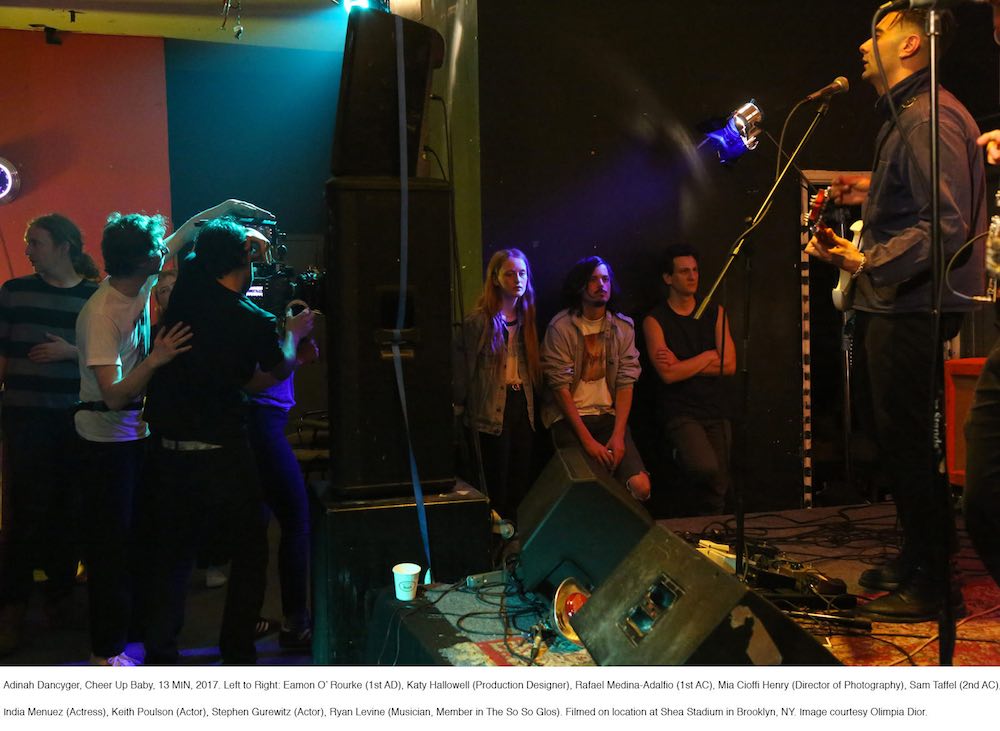 What kinds of conversations has this film sparked? What reception has it been met with, across the various contexts where it has been screened? How have different audiences been struck by the film?
I would say the reaction has been predominately appreciation and understanding of the story for its subject matter and tone. There’s been a handful of individuals who have told me that the film captures a feeling they have experienced. I’ve had conversations with people where we’re both unable to find words to explain the feelings the protagonist is going through, which is a big part of what the film is about. I find that poetic and poignant. The film has brought up certain questions from audiences – questions I don’t necessarily have complete, satisfying answers to – but it’s important to me that the film is prompting people to have discussions to the point where it’s not about my film at all.
I’ve had a few people say the film makes them realize that this is an issue, a reality they don’t experience on a day to day basis but that they understand exists for other people, which is a realization that is great to hear. I’ve also had people question/doubt the severity of the film and therefore question the film’s purpose — I’m not quite sure how to argue with that take on it, so I can only try my best and explain what I’m going for, and hope that answers their question.
Have your goals for future projects shifted based on your experience with Cheer Up Baby’s trajectory? Has this project changed the way you plan to approach your next short film or other next endeavors? Were there any lessons that you feel like this film taught you – about filmcraft, different ways to reach audiences, or your vision as a director?
Before the festivals, I knew I just wanted to start working on a feature, so after having gone through a more extensive film festival circuit, I would say it definitely encourages me to continue on that track. Festivals also gear my brain to focus on narrative filmmaking.
In this past year, I’ve met more people that have become friends, collaborators, people I can share rough ideas with, and vice versa. A support system is so key, since much of filmmaking is not only discouragingly time consuming but quite isolating. I’ve been absorbing like a sponge over the last few years, trying to figure out what works for me and what I’d rather leave behind. I try my best not to let anxious waves of urgency get to me especially while writing, too. In short, I’m just figuring it out as I go.
With this film, I was able to explore and experiment with a creative palette in a new way and bring some of those techniques to new stories I’m developing, despite these new stories having nothing to do with the subject matter of “Cheer Up Baby”. But as far as approach, every project is its own beast, and I haven’t found a way that “works,” so I continue to write what I know because I want to eventually make these projects. I like working in an intimate, small family environment, and I want to maintain that level of intimacy, despite the scale of the project. “Cheer Up” took so much out of me – which is great –  but I also hope I can make short films that do not take as much energy as a feature.
What’s next for you?
Working on a feature script! I have a couple shorts I want to make so we’ll see if those can happen in the meantime.
Has being a part of Free The Bid’s community of women directors made a positive impact for you since being added to our database?
To be asked to do this kind of interview that has followed my trajectory with this film is really humbling, and I just feel a lot of support.
Any final words for our audience of women directors and those who love them?
Keep making things!!! 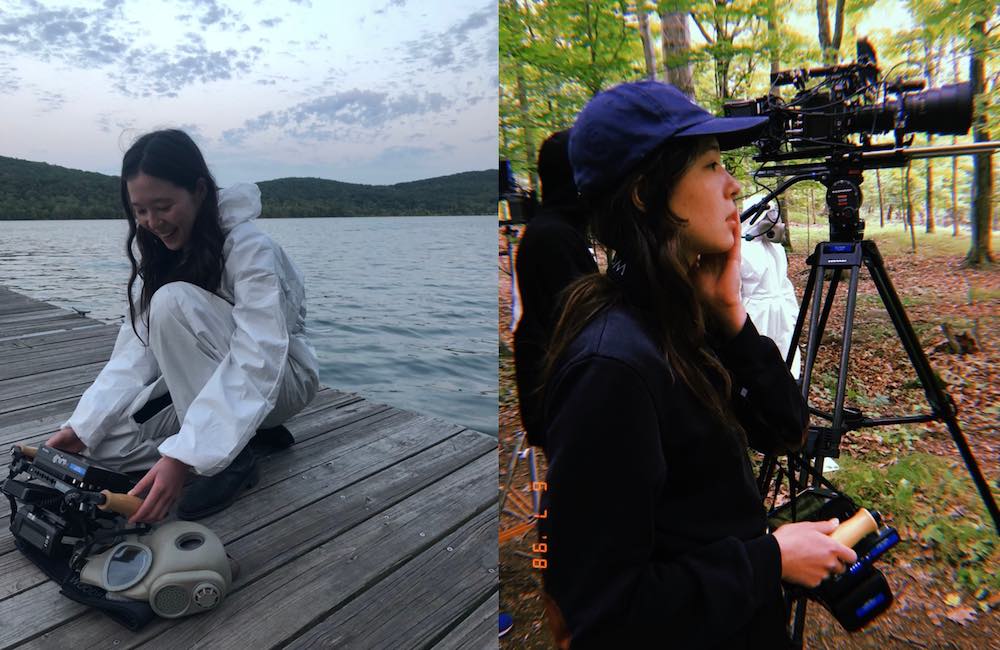