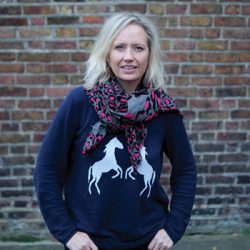 1. How did you get into advertising?
When I was 16 I studied two years at Art College, I loved everything that involved creativity and so it was hard to decide what discipline to specialize in. Eventually I focused on graphic design. However on the final year I had a change of heart and realized I was in love with ideas – I wanted to write as many as I possibly could, all of the time. It turned out this was advertising. But then I began to be told repeatedly that this was a career choice that men succeeded in, which did nothing but infuriate me – I rose to the challenge and threw myself firmly into it…

Three years later, with a first class honors degree, a postgraduate diploma from the renowned Watford school of copywriting, and 18 months of further low paid placements, I was finally offered 3 jobs at top ad agencies all on the same day. My (female) creative partner and I took the job at Leagas Delaney in 1999, considered at the time as one of the most prestigious places to work in London.

2. When did you decide that you wanted to direct?
A box of pencil crayons. Seriously. A friend gave them to me for my birthday one year, and on the front of the packet a slogan read ‘what would you attempt if you knew you could not fail?’ I looked hard at it, and the next thing I knew the thoughts ‘write and direct a movie and learn to play polo’ had sprung into my head. And they weren’t disappearing…

I played my first competition polo match a few years later. And now I’ve made my first short film.

3. What was the process of getting the funds for the short?
I had become friends with the owners of Madrefoca, a Mexican production company that I had hired for a job when I was working as a Creative Director. By this time, I was ready to leave behind my agency job and to start thinking seriously about writing and directing. I knew I wanted to make something that would kick-start my new career and I wanted it to be a challenge for me – something that would take me completely out of my comfort zone. Mexico offered a very interesting landscape and provided subject matter that would require some investigating. I wrote and presented a short film script to the team at Madrefoca and they loved it. They agreed to help with the funding, if in return I helped to set up a production services team with them in London. This wasn’t hard for me to get behind, as I really enjoyed shooting in Mexico with them.

At the same time I wanted the film to be a co-production between the UK and Mexico, and so another friend of mine from production company Ursus also helped me with funding. My good attitude, humble approach and belief in always helping people out when I was working as a creative director, came around to work in my favor. I am deeply grateful to all those individuals who invested in me – this was both in time, money and effort. People donated immensely in all kinds of ways.

4. Your first short is so accomplished on every level, how did you approach it?
As this was to be the first thing I would direct on my own, I wanted to fully submerse myself in the process. The producers at Madrefoca allowed me to work as would an experienced director, which meant figuring a lot of things out on my own.

This turned out to be crucial, although painfully hard, as it meant finding a space for me to really learn fast and accomplish a great deal. The other big challenge – I don’t speak Spanish.

In this situation I had to think practically about how I was going to achieve what I wanted. So I leaned in heavily to what I knew: ideas, great art direction and story telling. I injected as much of these factors as I could at every level and every moment.

During pre-production I never left anything to chance, I never bothered feeling embarrassed about what I didn’t know, I had an amazing and very experienced film crew so I always questioned everything – how I could do things, why I couldn’t, what were alternative ways.

Although I was very particular during pre production, I made sure I opened myself up to possibility during shooting. I had locked down as much as I physically could during pre, and so during the shoot I wanted to make sure I could make the most of whatever happened unexpectedly.

I’m also very particular in editing and had the wonderful luxury of working through the cut a few times. I cut it quite brutally on three occasions and changed the title also. Having the confidence to change things up so much after the shoot, felt really good. It was very liberating.

A director friend of mine passed a comment the other evening, he said “I’ve been thinking about how you made something so accomplished for your first film, and then on second thought, you’ve been working with so many directors from all around the world for so many years and you’ve been storing all of this knowledge. So when you finally had the opportunity to make something, you had this huge bank of experience to draw from.”

5. Are you interested in directing commercials? And if so, what kind of work is interesting to you?
I’m really interested in working collaboratively with ambitious brands and creatives.

I like productions where I have the opportunity to create film thinking from all angles, to allow it to become something special. Sound, picture, performance, and creating social conversation are all huge factors in engaging all of the senses.

I would like to develop about half of commercial projects and half personal ones in order to keep a healthy balance. I also believe they both feed into each other creatively. I have my own strong personal voice and viewpoint, which I am keen to develop in tandem.

6. As someone who has insight into the bidding process what do you think are the biggest challenges in getting more women hired and change the ratio?
Free the Bid is already hitting this head on and has created a platform to making it easier to hire female directors. The website now showcases a wonderful array of talent, allowing female directors to be discovered when they were perhaps hidden amidst all of the male directors out there.

However, I often get asked candidly why there really is a need for a female director on a piece of work when there are already 3 brilliant male directors ready to do the job.

Obviously we need to shift the ratio, but I was keen to find a more profound reason creatively. And to my mind I have it…

Recently I came home from the cinema with my fiancé, also a director, and we discussed the film we had just seen. The film in question was Andrea Arnold’s American Honey. What suddenly became clear to me is we had watched the same film, but when discussing had perceived the work from two very different angles. Why? Because I had watched it from the point of view of a woman being spoken to by a director with female perspective and experience. Without creating any spoilers Andrea Arnold takes her female protagonist and places her into repeatedly vulnerable situations, which really unnerved me at times, I felt scared for the girl, as any woman would, having had similar feelings throughout my life. All women have been through this, but this had completely passed my male partner by.

So yes, it is important that different voices are allowed to speak out from their own perspective, regardless of the type of project, be it a film or a commercial. And this is not just gender – it applies to race too. Everything we consume in life that is advertised by a brand is to a fully mixed audience, and so why do we have such a limited biding process of people telling these stories.

In light of recent events I have gained much clarity – it has never been a more prolific time to push forward and really accelerate women into positions with a voice. We need to make sure the world hears what women have to say and give them the space to go forth, create and inspire the next generation.

Throughout my lifetime I’ve been told there are things women can’t do – that’s why I’ve gone out and done them. Whilst feeling liberated and free myself, I want to inspire other women to feel the same – whether they are 6 or 86.

Freeing the Bid, is much bigger than a bidding process, it is about freeing the voices out into a world where they need to be heard, by everybody.

7. If production companies are interested in representing you what is the best way to contact you?
sarah@madrefoca.tv
sarahclift@me.com