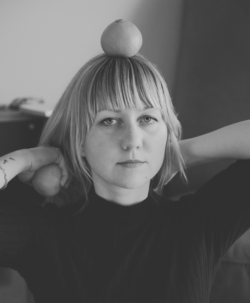 Happy Halloween, from the Free The Bid team (hey, that almost rhymes)!

Eva Michon‘s “All Shook Up,” is a perfect way to celebrate this ghouliest of holidays. A bruised man endures an absurdly convoluted automated phone menu after having his wallet stolen on his way home from a Halloween party – or is it all a dream?

Eva Michon is an award-winning international film director with a gift for cinematic storytelling and natural comedic timing. Born in Johannesburg, Eva grew up in Toronto, where she studied film at the prestigious Ryerson University. She cut her teeth with music videos for bands such as Owen Pallett, Head Wound City, Deap Vally, and Death From Above 1979 before expanding into the commercial and narrative filmmaking world.

Read on for our conversation with Eva on short film, the process of submitting work for awards and festivals, curated streaming platforms, and the shocking fact that Seinfeld references aren’t as easily picked up on in 2017 as one might except. 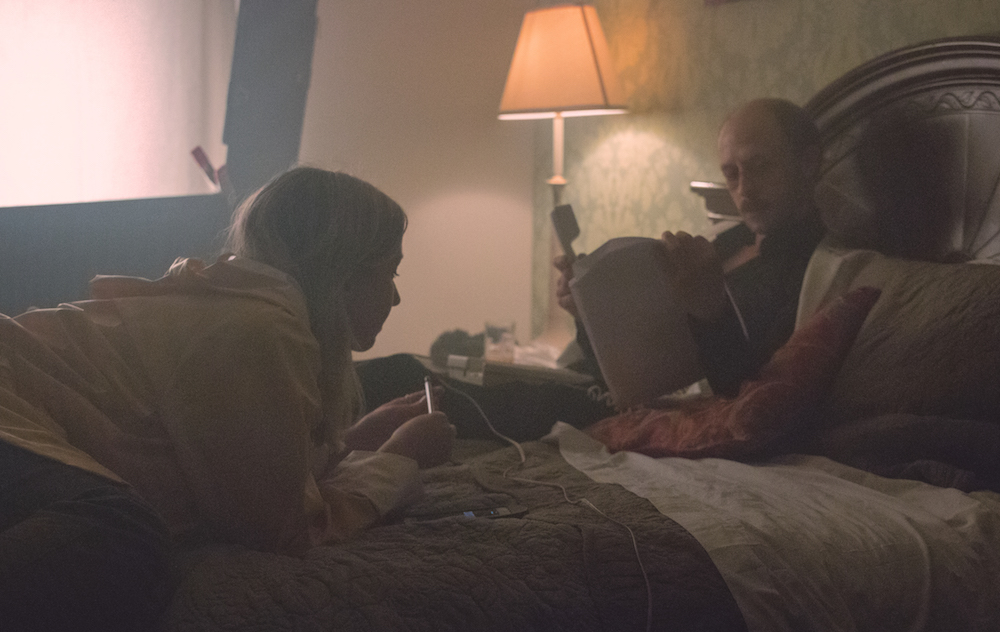 Happy Halloween! Before we discuss your work, do you have a favorite spoOoky Halloween memory/costume from years past that you’d like to share with us?

The spookiest thing recently is that I went to a Halloween party in a 10/10 Elaine Benes costume and almost nobody knew who I was.

That’s truly chilling. Your short film All Shook Up is a hilariously surreal dream-sequence, in the aftermath of a Halloween evening gone wrong. What gave you the initial idea to make this film?

The idea to make a short film came a few months after my husband Sebastien was mugged in real life, on Halloween. We talked about it a lot and I imagined making some kind of film about the aftermath of his experience. I could imagine a scene of violence mixing with bank customer service. But we wrote it together and it wouldn’t exist as a film had the incident not occurred.

We love the mind-numbing bureaucracy that your main character is forced to deal with on the phone (it’s frustratingly relatable). The clever script, which you wrote, is a big part of the strength of this short. How frequently do you get to both write and direct the projects you work on?

I have written a lot of my work, but I wouldn’t say it’s my preference. I like working with a partner more than solo, and would love to direct other people’s writing more often.

Tell us a bit about what the shoot for this short film was like. Was anything particularly challenging? Does the final product reflect your original vision?

Writing was challenging because we started the screenplay three weeks before shooting, even though it had been marinating for a few months. But there was less time to figure out what the point was, or at least what the hope for the intention would be. So I was re-writing dialogue until the night before, and continued re-writing through the editing process.

The shoot itself was scrappy, encouraged and cobbled together with generous friends. Last year I received a WFW rental grant through an award for a music video (Prism Prize in Canada) and the grant was about to expire, so I decided to fly to Toronto and make the thing. A production company called Route Eleven had approached me about working together, and I thought there’s no better way to try a relationship than on a project that requires mega passion to pull off, so they produced it and it was a fun experience. I’d also wanted to work with the wonderful cinematographer Bobby Shore for a while, and he was able to jump on board. And the location scout was a trip, we shot at a motel (shout out to Knight’s Inn in Scarborough), on a pretty infamous strip of motels not unlike the one my family first stayed in when we immigrated to Canada and didn’t yet have a place to live. But that’s another story.

You mentioned a “WFW grant” in your answers – can you clarify that a little bit further for our audience who might not be familiar with the term?

You’ve made a few short films now. In the scheme of your career as a director, what are some of the benefits to making shorts?

Practice, exploration. It’s a way to test out themes you’re curious about and sharpen your taste. Plus, there’s usually no money so the story needs to stand on its own.

How does short film work get funded? What are some funding sources that you know about or have used to finance your work in the past?

There are many ways to fund a short film, I think, I tend to put in money made from commercial work and share expenses with a collaborative production company. This was the case with my last short which premiered at TIFF, “Small Fry”, produced by Ways & Means. “All Shook Up” was paid for with the rental grant I mentioned, my savings, time donated from friends and services by Route Eleven. I know friends who have partnered with platforms and brands, and that seems pretty sweet, I’ve never done it myself. The short films I’ve made are ideas I want to explore without someone watching over me. Fashion films and music videos are a good excuse to make a short film, and a good starting point for many directors. I would recommend making work whether you’re funded or not, and not waiting for someone to give you permission. You always have the pieces you need to make something, if you have a story and a point of view.

Once a film of yours is completed, how often do you make the decision to enter it into film festivals? What’s your experience with festivals been, and are there any that you would like to recommend for up and coming filmmakers?

Premiering a short film at a festival is fun. Of course it depends on your film and the festival, but it is also a lot of energy, money, and requires that you know what you want to do so that you can capitalize on the festival experience. It’s also fun to get a pass to watch movies you might not otherwise see, that’s what it’s all about. You can explore festivals at Withoutabox.com, and here is a good start to navigating some. Careful, because it can get expensive just to submit. 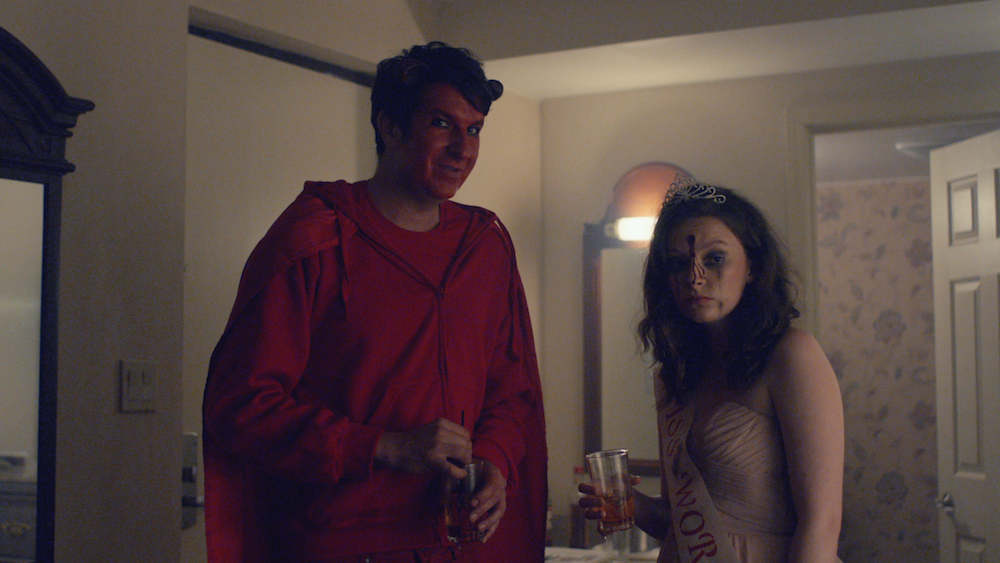 All Shook Up is a Staff Pick on Vimeo – congrats!

What other opportunities/platforms are there to get a short film online? What are some of the constraints or pros/cons that come with creating work for online platforms (such as NOWNESS, Refinery29, and others)?

I think you have to do your own research and see what platforms speak to you. It could be a great experience, or it could be a compromise, so it depends who you work with. I appreciate curated websites like Le Cinema Club who dig up old and forgotten gems, purely for the sake of sharing. Thoughtful curation is important because there are a lot of films on the internet, and we could all use some help picking which ones to watch. It’s like a staff pick wall at a video store. I used to work at one, by the way, and it was a great way to have interesting conversations about film with strangers. But you probably only want to watch the films recommended by someone with similar taste.

Let’s talk about awards, as pertaining to short film. Do you enter your short film work into awards competitions often? How does that work? What should young directors be aware of when they’re looking into submitting their work to competitions and awards? Are there any in particular that you’d want to talk about?

I haven’t applied for short film awards, I suppose if you go the festival route your film will usually be entered to win prizes. But I don’t think it’s very useful to think about awards when you’re in the process of making something, I like to hope that’s something the producer is thinking about. I think the Prism Prize is great because it motivated me to make more work by giving me an opportunity I didn’t want to waste. It’s cool if an award comes with some tools and not just a statue.

I just directed this fun music video for Miya Folick, which we shot entirely on a roller coaster, and I’m developing a feature film to shoot in Poland next year.

I think diversity in storytelling just means a more dynamic range of stories being told. It’s kind of a no-brainer — who wants to be bored with the same perspective over again? I’m not suggesting to re-invent the wheel, I just want to learn about humanity and be moved through a range of perspectives.
Any final words of advice for women who’d like to start directorial careers?
Just do it, and don’t be afraid to fail. Support others around you, be a benefit to your community, no matter if they look like you or not. Don’t be afraid of being impolite. And tell great stories. 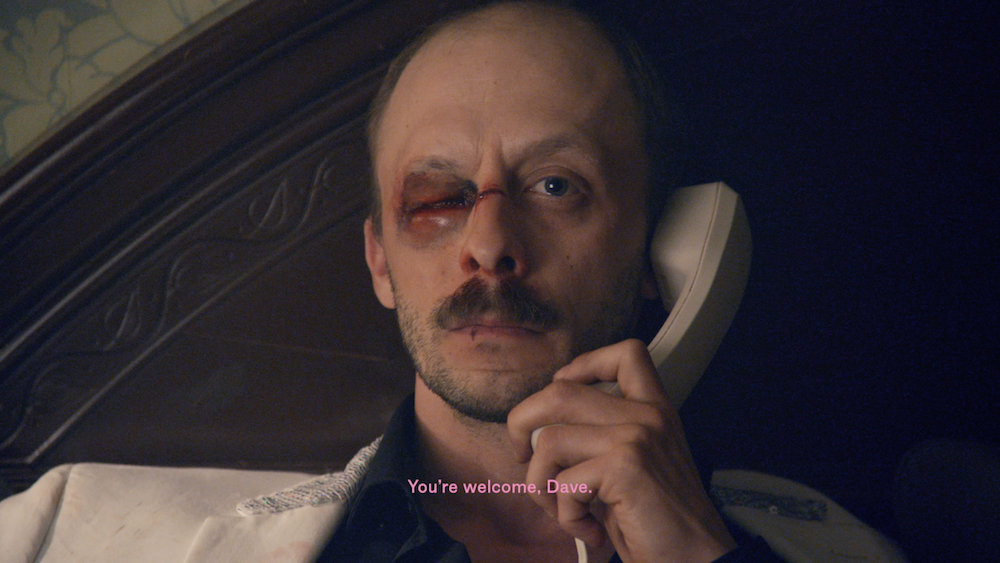 Colorist: Derek Hansen at The Mill