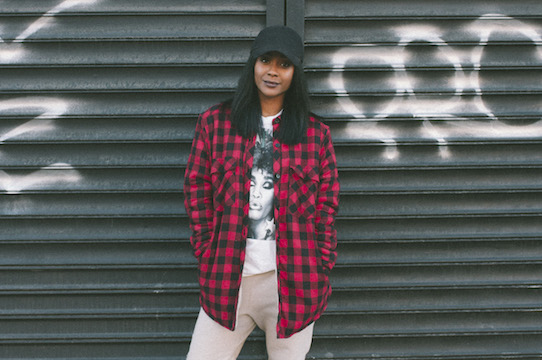 Introducing Little Minx director A.V. Rockwell, one of the most recent additions to the Free The Bid family!

A.V. Rockwell is an award-winning screenwriter and director from Queens, New York. Acknowledged as a “rising indie filmmaker” by Entertainment Weekly, her work which includes the short film collection Open City Mixtape, has been celebrated for its brutal yet poetically humanized depictions of urban life. The distinctive voice that dominates her work slyly addresses issues of race, family, identity, and systematic oppression.

Check out our interview with A.V.  below!

What filmmakers have had the biggest influence on your work?

It’s really tough to say these days because where I’m drawing from changes as I do. Spike Lee and Martin Scorsese will always come to mind because their body of works are the ones I grew up watching the most. Aside from that I’d say I keep going back to classic Disney animated films, which may seem random when you consider the tone and subject matters in my films but I do see a connection between those stories and the way my own creative process has evolved.

You directed a short film, The Gospel, to accompany Alicia Keys’ latest album. What was the process of working with her like?

Alicia challenged me for sure, but she was very open to my ideas and I really appreciate her for trusting me as much as she did. There were a lot of similarities in how growing up in the New York City influenced each of us creatively, so it made coming together on this feel very organic. It was also fascinating to hear more about the nuances of her own upbringing, so I tried to channel that into the piece as best as I could.

Tell us a little bit about your project Feathers, which just won Through Her Lens, the prestigious Chanel & Tribeca program for women filmmakers (congrats!)

Thank you! It’s a story about life at a reform school run by a lawless group of boys. Although I’ve worked a lot with youths in my previous films, this will be quite a departure in many ways to what I’ve captured before so I’m excited for that.

When you’re on set, how do you like to work?

I like to work in an environment in which everyone can have fun without ever losing sight of the work at hand. I’m more business than play when it comes to getting through a shoot day, but with production being such a stressful environment, maintaining a positive vibe on set is critical.

What qualities or ideas do you hope viewers take away from your films?

Lately I’ve been thinking a lot about assimilation and feel very strongly about challenging notions about what – or who – is deemed as All-American. So often minorities are left to feel ashamed of who we are and where we come from, as if none of it has contributed to the fabric of American culture and that’s simply untrue. I really want to people to love and accept themselves for exactly who they are at this moment. Also, observing how rapidly gentrification is reshaping American cities has encouraged me to preserve the cultures that are being erased, as best as I can. The perspective I capture is very specific to my own experiences with it, but I feel a sense of urgency to preserve the memories of these communities before they’re gone completely.

In addition to the shoot I have coming up, right now I’m developing a few projects and writing a lot so that’s been really enjoyable.

Any words of wisdom for other women working in film?

Create, share, and continue to build up these empowering networks online because it really is making a difference. Our voices need to be heard, our stories deserve to be told and let your awareness of what the industry is lacking energize all that you do. Be inclusive in ways that the industry isn’t, not just regarding gender, but create opportunities for other minority groups as well. Most importantly – check your biases, most of which are still unconscious because we’ve been nurtured to view the world a certain a way, whether those images and practices harm us directly or not.